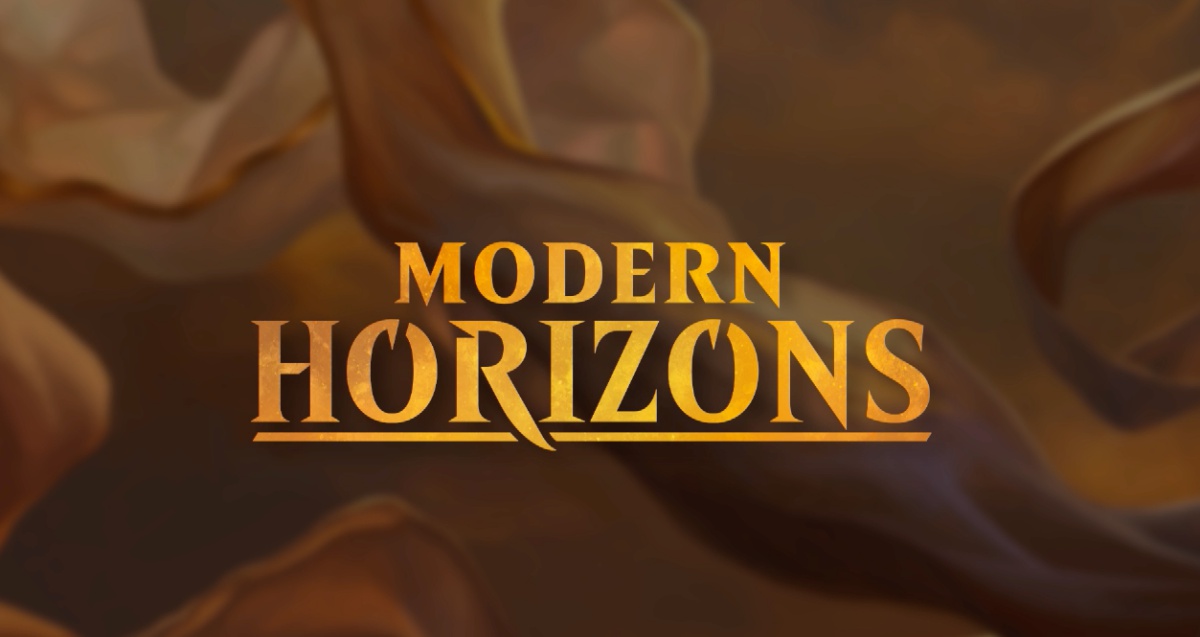 War of the Spark just came out, but Magic: The Gathering is already releasing another set called Modern Horizons. Modern Horizons is the first time Wizards of the Coast is releasing a set that will skip the Standard format and go straight to Modern. As a Commander player, I’ve been excited about this set since it was first announced, especially since it will feature 249 new-to-Modern cards (254 total), with a mix of reprints that were no longer legal in Modern.

There are plenty of spoilers out about the set, which is being released June 14th, but what I’m super excited about are all the potential Commanders and the angel cards, since I do have an angel deck (Serra Planeswalkers are everything). So I wanted to put together the Legendary Creatures and two new Legendary Planeswalkers that are going to be a part of this new set.

I’m especially excited for the new Sisay card, since she was one of the first Black female characters in Magic, and because she can use all five mana types, the possibilities for chaos are everywhere. I will absolutely be putting a deck together with her in it. 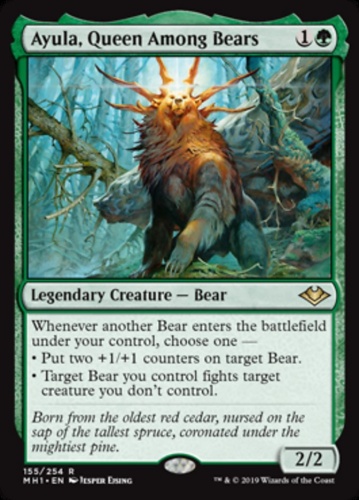 Ayula, Queen Among Bears {1}{G}
Legendary Creature — Bear
Whenever another Bear enters the battlefield under your control, choose one —
• Put two +1/+1 counters on target Bear.
• Target Bear you control fights target creature you don’t control.
Born from the oldest red cedar, nursed on the sap of the tallest spruce, coronated under the mightiest pine. 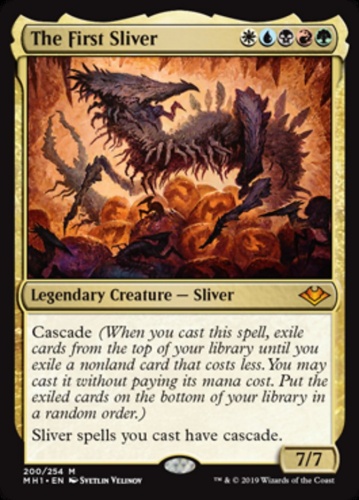 The First Sliver {W}{U}{B}{R}{G}
Legendary Creature — Sliver
Cascade (When you cast this spell, exile cards from the top of your library until you exile a nonland card that costs less. You may cast it without paying its mana cost. Put the exiled cards on the bottom of your library in a random order.)
Sliver spells you cast have cascade. 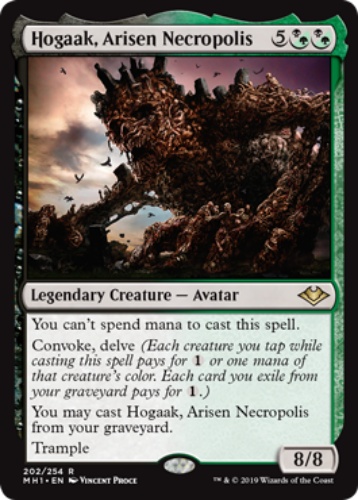 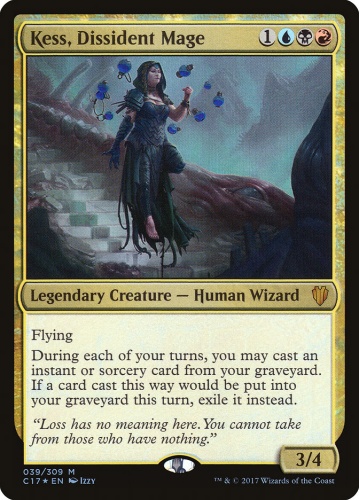 Kess, Dissident Mage {1}{U}{B}{R} (Reprint)
Legendary Creature — Human Wizard
Flying
During each of your turns, you may cast an instant or sorcery card from your graveyard. If a card cast this way would be put into your graveyard, exile it instead.
“Loss has no meaning here. You cannot take from those who have nothing.”
3/4 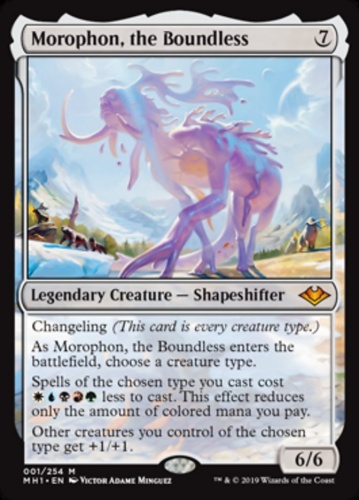 Morophon, the Boundless {7}
Legendary Creature — Shapeshifter
Changeling (This card is every creature type.)
As Morophon, the Boundless enters the battlefield, choose a creature type.
Spells of the chosen type you cast cost {W}{U}{B}{R}{G} less to cast. This effect reduces only the amount of colored mana you pay.
Other creatures you control of the chosen type get +1/+1 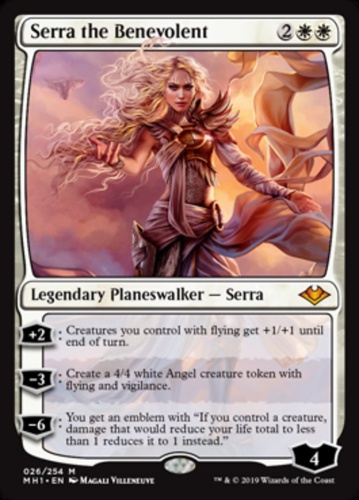 Serra the Benevolent {2}{W}{W}
Legendary Planeswalker — Serra
+2: Creatures you control with flying get +1/+1 until end of turn.
-3: Create a 4/4 white Angel creature token with flying and vigilance.
-6: You get an emblem with “If you control a creature, damage that would reduce your life total to less than 1 reduces it to 1 instead.”
Loyalty: 4 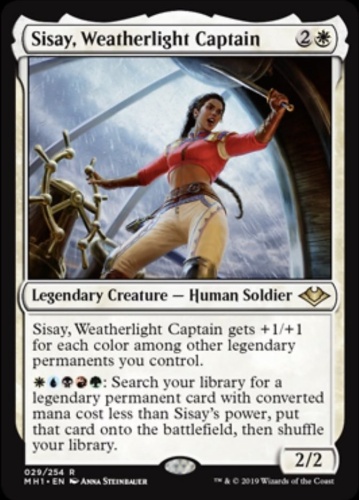 Sisay, Weatherlight Captain {2}{W}
Legendary Creature — Human Soldier
Sisay, Weatherlight Captain gets +1/+1 for each color among other legendary permanents you control.
{W}{U}{B}{R}{G}: Search your library for a legendary permanent card with converted mana cost less than Sisay’s power, put that card onto the battlefield, then shuffle your library. 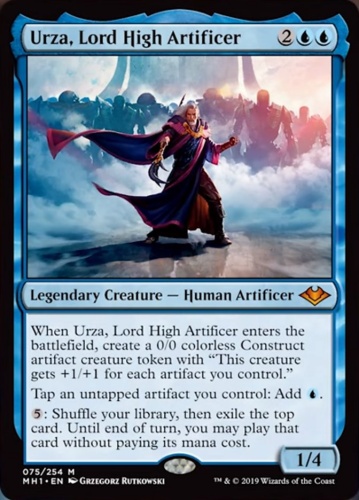 Urza, Lord High Artificer {2}{U}{U}
Legendary Creature — Human Artificer
When Urza, Lord High Artificer enters the battlefield, create a 0/0 colorless Construct artifact creature token with “This creature gets +1/+1 for each artifact you control.”
Tap an untapped artifact you control: Add {U}.
{5}: Shuffle your library, then exile the top card. Until end of turn, you may play that card without paying its mana cost.
1/4 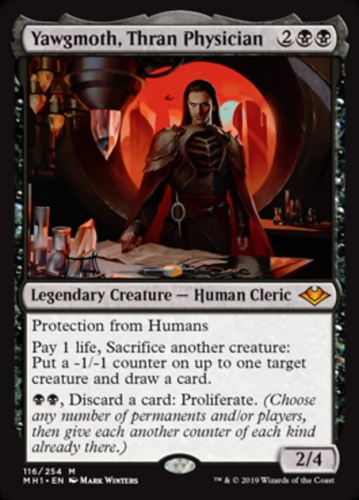 Yawgmoth, Thran Physician {2}{B}{B}
Legendary Creature — Human Cleric
Protection from Humans
Pay 1 life, Sacrifice another creature: Put a -1/-1 counter on up to one target creature and draw a card.
{B}{B}, Discard a card: Proliferate. (Choose any number of permanents and/or players, then give each another counter of each kind already there.) 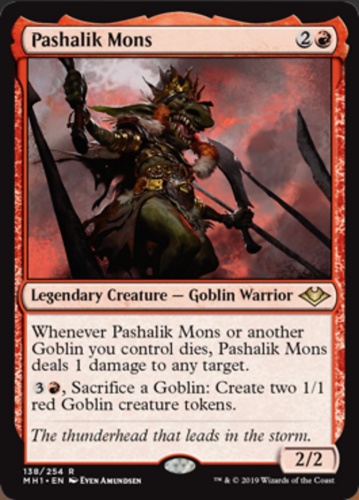 (Illustrated by Even Amundsen) 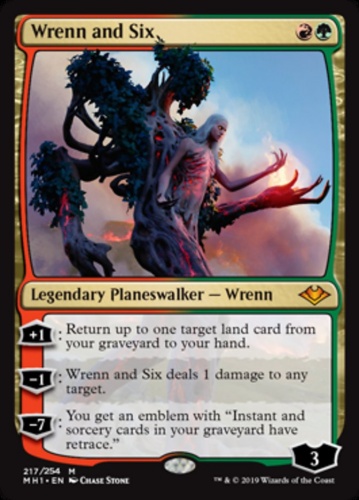 Wrenn and Six {R}{G}
Legendary Planeswalker — Wrenn
+1: Return up to one target land card from your graveyard to your hand.
-1: Wrenn and Six deals 1 damage to any target.
-7: You get an emblem with “Instant and sorcery cards in your graveyard have retrace.”
Loyalty: 3

Commander and Modern players, what cards are you looking forward to playing with when this set drops next month?