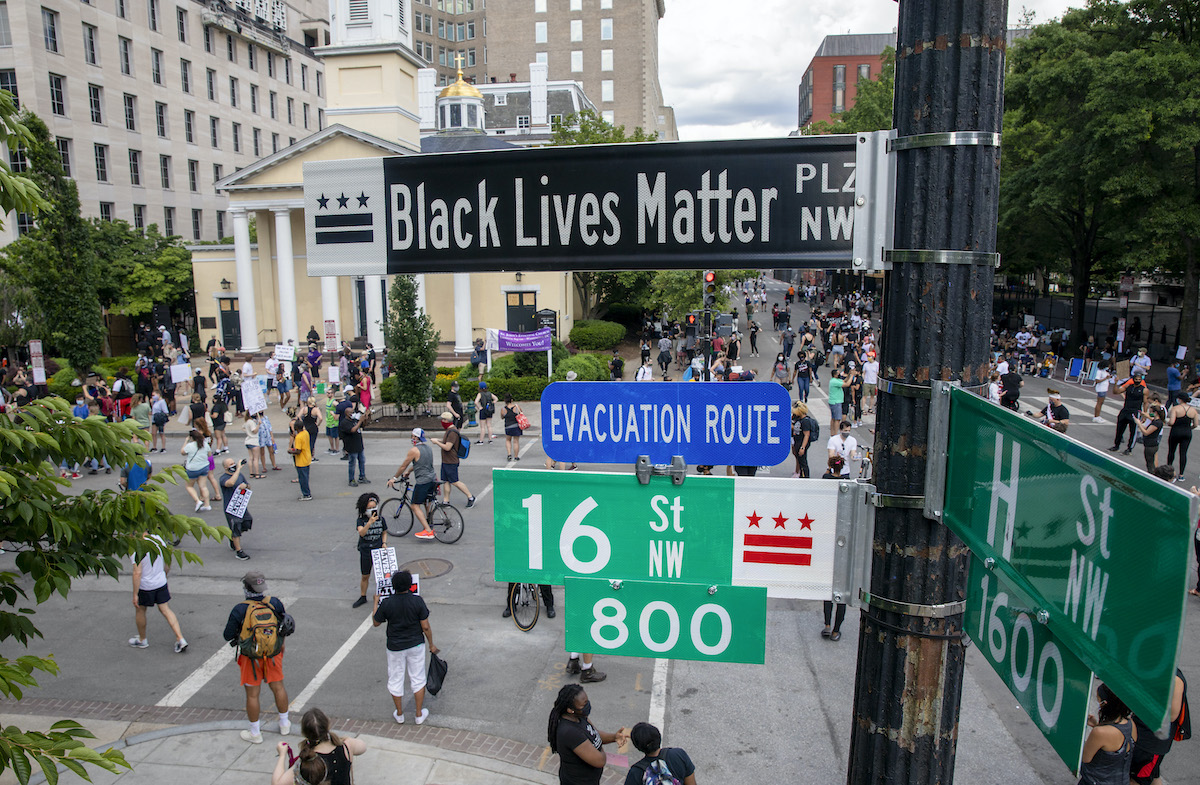 Last week, a piece was published on the rightwing website Human Events by Daniel Turner, an anti-green energy advocate. I didn’t see this essay until today and I cherish those five days in between when I didn’t know it existed. I want to go back to that time.

Turner used the site to announce that he’s leaving Washington D.C. because, essentially, Black Lives Matter protests got in the way of his afternoon tea. That’s not even an exaggeration.

Reading this gentrifiers manifesto and losing my goddamned mind pic.twitter.com/GwvZcouAba

After whinging about all the sacrifices he made to live in the city (noise, the existence of homeless people, etc.), it was all apparently too much when the mass national protests in response to police refusing to stop murdering Black people made him unable to enjoy his extravagant tea parties:

I used to go for afternoon tea at the St. Regis Hotel on 16th Street; it’s now been renamed to “Black Lives Matter Plaza.” Tea was expensive, excessive, and extremely elegant served impeccably in a magnificent room to properly attired patrons who politely spoke in hushed tones, a little taste of a bygone era when etiquette and formality were still appreciated.

The St. Regis is now girded with plywood barricades that have been spray painted with curse words. Outside, people routinely set fires and have fights with the police. If I went back, I’m sure some neo-liberal philosopher of the BLM cult will tell me that clotted cream is a microaggression. The tea just isn’t worth it anymore.

Setting aside the fact that we’re in the middle of a pandemic so a public indoor tea party is a hell of a hill to die on in any case, Turner is livid that he’s no longer able to ignore people demanding justice. You used to be able to brush past sidewalk environmentalists and avoid the marches, he says, but now the protests are everywhere and they’re disruptive as if that weren’t the entire point.

A very odd thing about the essay is that while there are plenty of people that don’t support the Black Lives Matter protests, Turner tries to assign this outlook to “city people,” by which he clearly means rich white people because otherwise he thinks all of the protesters are flocking in from the country every night.

His explanation for why “city people” can’t be bothered to care about systemic oppression and violence is wild:

Real city people have no bandwidth to lay down dead in the street or start fires as part of a “protest.”  Look at our day: after our miserable commute to work, we have long days in the office, followed by happy hour, client dinners, drinks, maybe a fundraiser or two or having cigars at Shelly’s—and that doesn’t include going to the gym, picking up dry cleaning, seeing our actual friends or spouse, and that miserable commute back home. Quite honestly, we don’t have time for your cause—of which there are so many, so very many causes, so much so that even a city as liberal DC just does not care.

Yes, who could be bothered to give up their cigars or their drinks–not to be confused with happy hour, which has its own place in his packed schedule–in order to muster up a little empathy?

But empathy, it turns out, is Turner’s entire problem.

That’s why, when DC’s Mayor Bowser spray painted “Black Lives Matter” in front of my tea spot, I knew I was done. Not because of the issue itself or the cause (remember I don’t really care) but because through her actions, Bowser effectively mandated empathy. This was government-sanctioned compassion. The mayor used taxpayer dollars—the one’s I’ve forked over for years—to force her beliefs on me. And, just like that, the pact was broken.

Turner is upset that, for this moment in time, his role as a good capitalist cog is not being adequately appreciated. “My role in the fabric of urban society, overlooked but essential, was to spend my money,” he writes. “Eat, drink, shop, spend, tip, pay … All I asked in return was relative safety and to be left alone to enjoy the city. City-living in America, for decades, meant tolerating mild inconveniences so that you could be left alone, alongside millions of others. That was the tacit pact. And DC broke it.”

Turner repeatedly talks about this broken social contract, where he was supposed to spend and spend and his city was supposed to protect him from uncomfortable scenarios. (He wouldn’t say protected, he says he wants to be “left alone,” but these issues he’s bemoaning would still exist, he just wants to be sheltered from them.)

Of course, there is a social contract and it has been broken. But Turner is not the victim here. It’s the entire reason for the protests he hates so much.

This is the contract that’s been broken:

If you can’t watch that video, here’s the crucial bit:

You can’t win. The game is fixed. So when they say, “Why do you burn down the community? Why do you burn down your own neighborhood?” It’s not ours. We don’t own anything. We don’t own anything. Trevor Noah said it so beautifully last night. There’s a social contract that we all have, that if you steal, or if I steal, then the person who is the authority comes in and they fix the situation. But the person who fixes the situation is killing us. So the social contract is broken. And if the social contract is broken, why the f*** do I give a shit about burning the f***ing Football Hall of Fame, about burning a f***ing Target?

It’s worth pointing out that midway through his essay, Turner includes a picture of D.C.’s Emancipation (or Freedman’s) Memorial, which is a statue with a complex history but that, through a modern lens, is more than a little problematic. It shows a Black man kneeling in front of Abraham Lincoln, who is waving his hand over the man benevolently. Turner gives no explanation for its inclusion, and I’m guessing he would just cite it as a D.C. landmark, but the obvious and disgusting implication is the common rightwing insistence that those protesting should be more grateful for what they’ve been “given.”

Daniel Turner says he’s packed up and left the city. Good. He is not nearly as crucial to the city’s societal wellbeing as he thinks. In fact, he sounds like a detriment to it.

(image: Tasos Katopodis/Getty Images)
Want more stories like this? Become a subscriber and support the site!