A recently leaked memo suggests that Apple, along with RIM and Nokia, may have made a deal with the Indian government, giving them a backdoor into software in exchange for market precense. The memo, sinisterly titled “Tactical network for cellular surveillance,” was leaked by The Lords of Dharmaraja, the group responsible for the recent hack of Symantec. The document states that RINOA (Rim, Nokia, and Apple) were involved in the decision to “sign an agreement with mobile manufacturers in exchange for the Indian market presence.”

It gets worse. It seems that this backdoor access was then used to spy on the U.S. China Economic and Security Review Commission. One of the many questions floating around now is: If this really did happen in India, what’s to keep it from happening here? Granted, we can hardly expect any of the organizations involved to actually fess up if this is the case, but regardless of what they say, the seeds of doubt have now been sown. There’s little to suggest that the The Lords of Dharmaraja have anything to gain from falsifying such information and the documents, as they stand, seem pretty bad. It’s unclear what kind of PR white-washing is going to need to be done to try and clean this up, but we’re sure to find out soon. 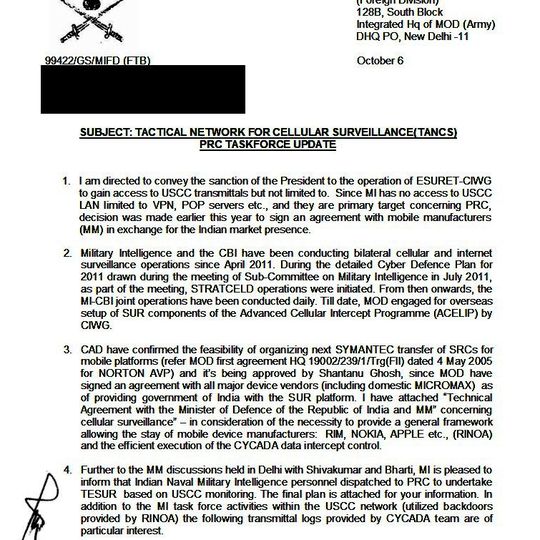