How could this possibly end badly? 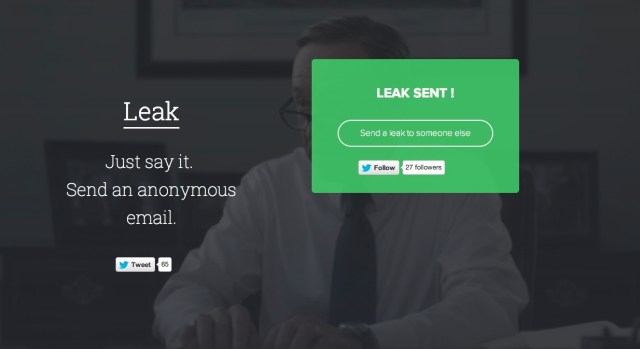 Justleak.it, or Leak, is a newly-launched site that lets users send anonymous messages. Have something to get off your chest? Wish someone would tell the intern who chews with his mouth open to stop doing that? Now you can. At least in theory. In practice it appears that all the anonymous messages I’ve sent have found their way to spam folders.

Obviously this power could be used for evil just as easily as being used for good, but it’s not like people can’t already be anonymous online. Link simply makes the process a little less complicated than registering for a fake email address. There are even guidelines on the site listing “Dos and Don’ts” of anonymous behavior like “Do use anonymity for good,” “Don’t post threats,” “Do report bad behavior,” “Don’t bully or harrass. [sic]”

The description of the “Do report bad behavior” section reads:

We rely on you to keep Leak a safe and constructive tool for quality content. If there is something you see that is not in keeping with the spirit of Leak, then we’d like you to inform us as soon as possible. There is no flagging feature for now because it’s impossible with anonymous emails. But we review all content that’s reported to us and we will, if necessary, try to do something to users who aren’t adhering to these guidelines.

So they’re acknowledging that they’ll do their best to stop people who violate their terms but also admitting there’s really not much they can do.

The spirit of the site appears to focus very much on the positive potential of being able to speak anonymously, but this is the Internet after all—someone’s bound to be a jerk. Anonymity is often a tool used by cowards to say what they don’t have the courage to attach their name to, but it doesn’t have to be.

So, Leak is a tool that has the potential to be used for good or evil, and it’s bound to be used for both. Anonymity online isn’t new, but it’s an issue that’s come under some debate recently.

Whether you plan to use Leak for good or evil, it does appear that most of the time the messages are going to spam folders rather than inboxes, so the chances that your intended recipient will actually see your message is low. That might change if the Leak team can work around it, but out of 10 test Leaks I sent this morning to people’s various email addresses only one went to the recipient’s inbox.

So what do you think? Does the Internet need an easier way to send messages anonymously? Is Leak going to be used for good or evil?