Appealing to Gay Audiences Is Great, Hollywood Reporter, but Can We Lay Off the Word “Stromo?” 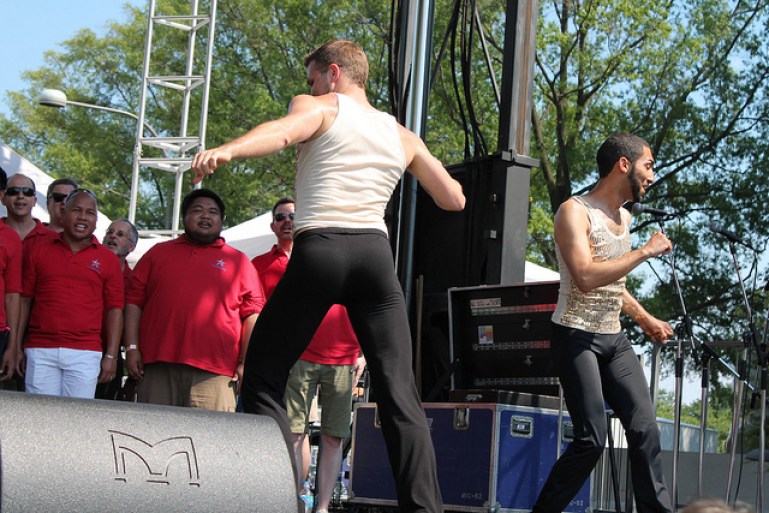 Today, on The Hollywood Reporter‘s website, there’s an article with the charming headline, “Introducing the Stromo! Why Straight Male Stars are Going Gay(ish).” My feelings about this … conflicted, they are.

The article discusses the seeming uptick in straight male celebrities who, whether they’re playing a gay role or involved in an LGBTQ+-specific project or not, want to appeal to the gay male audience. Merle Ginsberg’s piece cites Channing Tatum (who suggested that they do a Magic Mike XXL float at L.A. Pride this year), Nick Jonas (who performed at Pittsburgh’s LGBT Pride Festival), and actors like Chris Hemsworth, Chris Pine, Kit Harington, and Josh Hutcherson (who’ve all appeared on the cover of Out Magazine in recent years) as part of this trend.

My first response to the article was … great! It’s about damn time! It’s like, for the first time, men are in a position where they’re being ogled in that way. When they’re being attractive for women, the excuses for not being objectified always is “women are attracted to different stuff; men are more visual,” which is just bullshit to me. But now, in going for the gay male audience, they’re showing more skin and being attractive in a way that they weren’t necessarily before. NOT A PROBLEM FOR ME (as someone who is often attracted to the men).

But then, the tone of the piece, the way the article framed all of this, really started to niggle at me. First of all, the framing of it as a “trend,” as if it were something these Hollywood stars were doing to be fashionable as opposed to, oh I don’t know, something they were doing because we’re living in 2015, and more and more men of a certain age are comfortable having gay friends and understand the concept of “just because gay people are attracted to you doesn’t make you gay.”

Secondly, the words used are insulting and insufferable. Let’s start with the headline:

Introducing the Stromo! Why Straight Male Stars are Going Gay(ish).

Going to Pride events to perform is not “going gay.” It’s not even going gay(ish). You know what makes a man gay (or bisexual)? Him enjoying sex with men. Going to Pride events to perform is just a smart thing to do. The THR piece does touch on this point. Craig Karpel, of Karpel Group, a marketing company that specializes in connecting films to LGBTQ+ audiences, says:

Studios are realizing that gay people don’t just go to gay movies. We go to every movie. For basically straight films, we’re hired to do gift bags at nightlife events, festivals, parades, gay bars and clubs. The competition for clients to market in gay clubs is fierce — it’s a captive audience.

This isn’t just a sexuality comfort issue. It’s also a demographic shift. If you look at polls, many people over 60 have all kinds of prejudices; under 40, everyone supports gay rights and most people don’t care about labels anymore. Not only that, magazines that cater to the gay community guarantee beautiful shots. Publicists love beautiful covers as much as stars do.

Demographics are shifting, and more and more men have been raised to not only be secure in their own sexuality, but to be more comfortable with the idea of fluidity. These are all very good things. Sex sells, and the problem with representation of women in media isn’t inherent to the sexuality of the images itself (the issue of sex-positivity and the prevalence of sex in general in media is a separate conversation), but the fact that the objectification of women is disproportionate to the objectification of men, pointing to the larger problems of double standards, misogyny, and sexism. So, to me, it seems a fine solution to have more men being hot and showing skin.

However, what I think does the LGBTQ+ community a disservice is coining terms for these changing demographics like “metrosexual” or the even more stupid “stromo.” These men are cis, straight men who want to be attractive to people (and why not?) and who embrace things generally found on the feminine side on the spectrum (so what?). Giving them their own stupid labels not only demeans the LGBTQ+ community by equating their sexuality with a trend that can be as easily put on and taken off as a costume piece, and demeaning to anyone with a feminine gender expression (as if femininity is inherently weird and deserving of being “othered”), but it also demeans cis straight men by telling them what they are, and aren’t, allowed to like, policing their gender expression in a way that doesn’t do anyone any good. Though the THR piece touches on some of the good points I highlight above, the fact that it frames this story as a fluffy fashion piece undercuts all that.

The problematic aspects of this piece and pieces like this are best captured in a quote used from British social critic, Mark Simpson, who coined “metrosexual” (thanks for equating grooming with sexuality, dude. We all needed that. /sarcasm) back in 1994:

Men increasingly want to present themselves as available for fantasy to both sexes — especially if they’re heterosexual. Women no longer own that province of objectification. Straight men now want to be sex objects — and what better way to get objectified than by other penised human beings?

First of all, women don’t “own” objectification, they’ve had it thrust upon them. Second, I don’t think straight men want to be “sex objects,” so much as they want to be found attractive – there’s a huge difference. And that part about “other penised human beings” shows a huge amount of ignorance about gender and sexuality. Maybe we shouldn’t be letting people this ignorant about sexuality and gender make up words, huh? Just a thought.