Star Wars: The Last Jedi Ushers in the Future of Storytelling 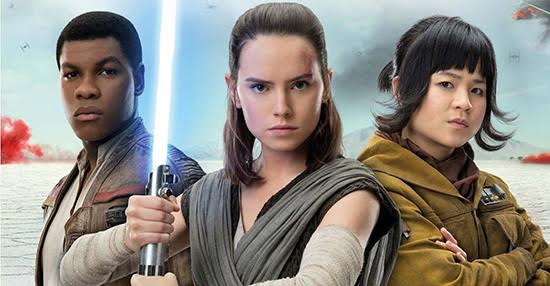 Still avoiding spoilers for Star Wars: The Last Jedi? Then avert your eyes and click away! This post will be laden with some important plot points from the movie.

Like it, love it, or hate it, it’s hard to deny that Star Wars as a franchise has been a driving force in pop culture as we know it, since the very beginning. This franchise changed the name of the game when it first rolled out onto the big screens in 1977 with sweeping visuals, compelling and genre-bending plot, and actors with chemistry that leaped off the screen. True to its predecessors, this year’s The Last Jedi has once again put the franchise into the spotlight as a genre-defining movie.

According to the internet, not everyone sees this as exciting as I do, but allow me to make the case for why this movie came out at exactly the time we needed to see it.

For years, the movie industry’s general genre of mainstream sci-fi has held increasingly dark outlooks, bleak dystopian nightmares that cast increasingly one-sided hero arcs for one subset of the population: white men. For a generation, Star Wars upheld that narrative as well, focusing solely on its white, mostly male characters without really exploring, or explaining, what happens to black or diverse characters—if they were featured at all—such as Lando Calrissian (Billy Dee Williams). In The Force Awakens, we saw this start to fall away.

We watched Finn (John Boyega), a conflicted black Stormtrooper turned Resistance fighter, dominate our screens and carve out his place in the Star Wars universe. Similarly we watched as Rey became the movie’s focus in a way we had all dreamed Leia would be in the originals. It was Finn and Rey who propelled this trilogy off the ground, giving a spotlight to characters who had been ignored so often in the past. Rogue One, though a prequel to the originals, also showcased the new wave of Star Wars inclusivity. Giving us a female-led team of diverse, ragtag fighters who gave everything for their cause.

Groups under-represented (or ignored) in film often hear “baby steps,” and “give them time to change.” The Last Jedi threw that out the window entirely. There are no more baby steps for this behemoth, the time to change is now, and Director Rian Johnson is here to make it happen. Make no mistake, this film is still Luke Skywalker’s send-off, his passing of the torch to the next generation in hopes they can do and be better than his own.

But along with Rey’s journey into learning the ways of the Jedi, we watch as female characters across the galaxy take charge and keep the fight going. General Leia continues to be the Rebellion’s greatest leader, commanding her fighters and shouldering the sacrifices that come with each battle. Instead of a man taking Leia’s place when she’s out of commission, as is assumed by both characters onscreen and even in my own gut while watching, another strong woman takes the helm: General Amilyn Holdo (Laura Dern). She’s not just a fighter, but also cunning and tactical, while embodying beautiful grace—and enviably cool purple hair.

Of course, in talking about the film’s leaps towards embracing amazing women and diverse characters, we cannot forget about Rose Tico (Kelly Marie Tran). 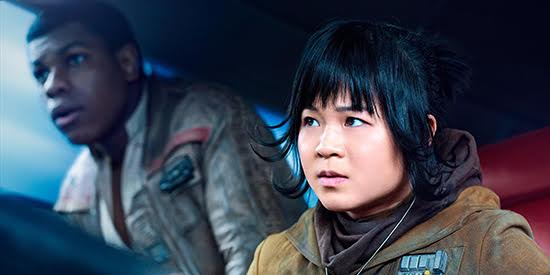 Rose leaps out of the screen full of emotion, wide-eyed in amazement at being near a big-name hero in Finn, but in keeping with the film’s constant theme, she quickly realizes being an infamous hero doesn’t always matter. In fact, it’s Rose who starts piecing together how their ship is being tracked. Rose is the one who leads the charge in Canto Bight, who teaches Finn that it’s not always about the big battles happening overhead. That war affects more than just the people on a ship; it affects the entire galaxy in real and tangible ways.

It’s also Rose who, in the end, saves Finn’s life when he refuses to listen to anyone else’s orders. Despite an already massive ensemble cast, Johnson was able to weave Rose is and create a character who, in any other film, might simply be a forgotten side character, and turn her into one of the main players in the game. Tran gave Rose life to this tiny character who could have so easily been lost in a sea of bigger names and galactic legacies, but instead she has become central to the story.

And let’s take a look at how breaking down the expectations of who can be a hero came into play with the biggest shocker of them all: Rey’s parents. The reveal (which we’ll assume for now is true) of Rey’s parents, as space scum who are fully irrelevant to the galaxy’s battles as we know them, is brilliant.

Now, I know many people had their theories about Rey being a long-lost Skywalker. Even I subscribed to the theory she was related to Obi-Wan Kenobi. Instead, we’re faced with this person who comes seemingly out of thin air into a fantastical world where the big players are already known. After all, this is Star Wars, and since those original films, we have been groomed to expect the “ah ha” moment where suddenly everyone important is related to or connected with someone equally important. Not only has Johnson flipped the expected script on its head, but he opened up the film to a much bigger message—one we need now more than ever

Instead of some grand important person who would save the galaxy, we were given a “nobody.”

We were given hope.

Hope that everyone matters in this story. Hope that even the smallest of us could be something bigger. Hope that our pasts don’t define us, only our actions and hearts do.

It’s an important and timely message. Who doesn’t want to feel like they could actually make a difference? In the original movies, we were given dreams. Dreams of being the hero, of being someone in the story. After all, Luke was never a nobody, not really. He was part of a lineage that shaped his every action, even when he didn’t know it. One might argue it was Luke’s origin story and his connection to Darth Vader that spurred a movement in the way we tell our stories even today. It has shaped the way in which we relate to characters and the goals they’re speeding towards. We’ve seen countless movies employ this trick, an homage to the first shocking moment, wherein the greatest hero in our galaxy was actually related to the greatest villain. With that original reveal, Star Wars made us want to know who are heroes really are. The decision to now take that same setup and instead eradicate it completely has set the stage for the stories to come.

Johnson continued driving this thread throughout the movie. In the film’s pinnacle moments, it’s the perceived unknowns who step out of the shadows and propel the story forward. In the opening scenes, we watch as Rebel bombers sacrifice themselves to follow Poe, fighting for what they believe in and sacrificing themselves to protect others. This is also a moment where Johnson shows us, right off the bat, that the future of our story rests in the hands of diverse characters, that Sci-Fi will no longer be a (white) boys’ club. Paige Tico (Veronica Ngo), Rose’s sister, is an unknown in her last moments as she deploys the bombs to destroy a Siege Dreadnought, and yet we watch her struggle, and we connect with her fight. In the first twenty minutes of a major franchise movie, an Asian woman is our hero, and though she dies, it’s not so focus can shift to only white characters.

In a near perfect foil of this opening, we also end the movie focusing on nameless, unknown characters: children. The story of the rebellion is being heralded by a young black child—and if that didn’t strike a chord with you, you haven’t been paying attention to the world recently. This final sequence, away from our heroes, away from the chaos of that last battle, cements Johnson’s message to us. There is hope for the future, and that hope comes in the form of people who are too often forgotten.

Was this a perfect movie? Certainly not. Could they have done better by Rose and Finn’s storylines? Absolutely. Do I think this film will change the name of the game? Unequivocally. Hollywood has always been a bit slow to step out of their boxes and breakdown the barriers, keeping marginalized voices out of truly groundbreaking moments in cinematic history.

For years, we have asked to see more women in action, see women take charge and embrace the whole scope of what that means—women who are as feminine, or not, as they choose without affecting any other part of their character, women who don’t have to be someone’s girlfriend or sex-robot to be interesting. We have also asked to see diversity on our screens. We want people of color, actors who are black, Asian, Filipino, Latinx, Middle Eastern, and on and on—diverse characters whose stories weren’t tired archetypes and old offensive stereotypes, characters who weren’t just there to be a wise teacher or other tired trope, but instead had their own stories. The Last Jedi slammed through those walls, casting not only a variety of diverse actors, but also a variety of body types, giving men and women a balance and foothold in a franchise that has permeated our lives for years, but one in which, until now, we had little of ourselves to see.

So while the internet fills with disgruntled whines, racist backlash, and sexist nonsense, I for one will be back in that theater seat watching this movie again and again—waiting for the next one, hoping that with each film I get to explore the galaxy, and do so with characters who look like the people in my life on the screen.

Lauren Jernigan is a nerdy bibliophile in NYC who spends too much time posting photos of her cat. She works as a Social Media Specialist and is online more than the average person sleeps. Follow along as she live-tweets her way through life: @LEJerni13