Something something Garfield something. 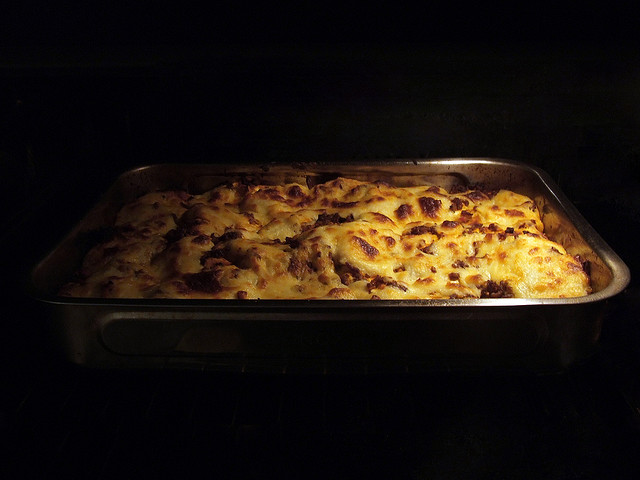 Last Wednesday a tractor trailer full of lasagna collided with a slow-moving train in Gaffney, South Carolina. Both drivers were able to escape with their lives, but tragically an estimated oodle of noodles were not so lucky.

The Gaffney Ledger (who went with the excellent headline “LASAGNA WAS EVERYWHERE”) explained how the truck full of precious cargo became ri-caught-a in hot water:

A trucker’s wrong turn led to a huge mess for the City of Gaffney, a trucking company, a railroad and hundreds of rush hour motorists Wednesday morning after a tractor-trailer filled with frozen lasagna got stuck on a railroad track at the worst possible time.

Is there a good time in South Carolina to mess the streets with pasta? The Ledger goes on to describe the devastation caused by

The train, which was traveling at approximately 32 mph, sliced through the trailer, carrying a portion of it with it as it continued down the tracks. Cartons and boxes of frozen food spilled all over the tracks.

Gaffney Police Chief Rick Turner said the ground was coated in a layer of lasagna so thick the fire department had to be called in to remove it, although sadly not with their mouths.

There was an inch of lasagna ground into the pavement. [The firefighters] came down with the truck to hose off the road but the water was beading up. They eventually used big buckets of detergent and brooms to scrub the roadway.

Damages to the tractor trailer were estimated at $150,000, but the emotional toll this will have on lovers of single serving portions of delicious Italian food is inestimable. So long, little lasagnas. God must have been hungry. May you rest forever in the embrace of his noodly appendage.