Meet Vomiting Larry, The Robot Who Vomits For Science 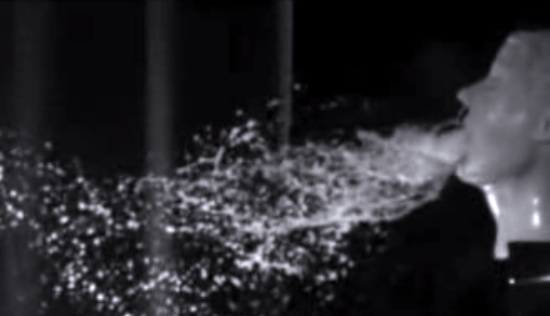 Vomiting Larry, The Robot Who Vomits, may sound like a character in a short-lived and particularly unpleasant Saturday Night Live sketch, but the world we live in is not that simple. Far from a joke, Vomiting Larry is a robotic assistant built specifically to produce projectile vomit, and lots of it. Larry — who is technically a “simulated vomiting system” that you can see in action after the break — is helping researchers study the food borne illness norovirus in hopes of teaching researchers how it spreads, and thus how they can best control potential outbreaks.

While a vomiting robot is — and we hope you’ll agree — totally hilarious, norovirus is no laughing matter. Just last week, we brought you news of an outbreak of the disease on a pair of cruise liners that sickened hundreds of people, ruining holidays across the Caribbean. It’s a common sort of food poisoning that sickens millions in the United States every year, and though it often results in nothing worse than having to take a particularly embarrassing sick day or two, the virus can be a serious threat to vulnerable populations like children and the elderly.

Though it’s often spread through tainted food, norovirus can also be a puke borne illness. When someone suffering from norovirus pukes — and that’s not an uncommon reaction — the virus becomes aerosolized along with the rest of their stomach contents, and can travel long distances. How long, exactly, though?

That’s where Larry comes in. As a robot, Larry can spill his superior metal guts longer and harder than any pitiful human could hope to, and can do it over and over again, helping the doctors studying norovirus better understand just how far the virus can travel in a patient’s vomit and ideally improving techniques for cleaning up after them. Apparently our first instinct — to point a flamethrower at any surface that someone puked on and be done with it — is kind of a nonstarter.

You can see Larry in action in the video below, courtesy of the BBC. Feel free to skip to about the 2:40 mark where Larry makes his appearance, and don’t feel bad about it. We’re all here to see a robot get sick. There’s no shame in it.