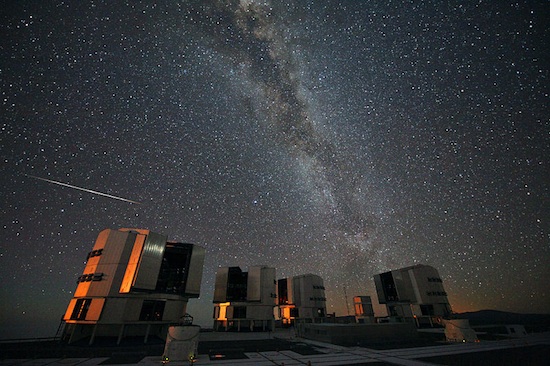 The European Southern Observatory’s Very Large Telescope (VLT) in Chile has already made a name for itself in the scientific community, second only to the Hubble Space Telescope for generating optical observation related academic papers. Though the first of the VLTs four primary telescopes was completed in 1999, plans to link the telescopes together as a single, massive unit have been in the works for nearly a decade. After years of work, all four telescopes were successfully integrated last week, giving scientists a 130 meter (426 foot) “virtual” mirror.

When operating in this linked mode, the VLT becomes the largest telescope on the face of the Earth. Since 2002, two or three telescopes at the site had been successfully linked, but a four-way integration eluded the researchers. An attempt last March produced miserable results, and was scrubbed after a mere 30 minutes.

Amazingly, the methodology of linking the telescopes is a very physical one. When scientists wish to use the telescopes in unison, the light collected from each individual telescope is actually carried via underground tunnels and combined into a single beam. This process, called interferometry, must take into account the infinitesimal delays between the arrival of light from each telescope.

With the final test of the four linked telescopes this past Thursday, the VLT can now offer astronomers the most powerful optical observation tool on the planet. Given the installations already sterling reputation, this milestone is sure to result in some fascinating new science and breathtaking images.

(BBC via Slashdot, image via Wikipedia)