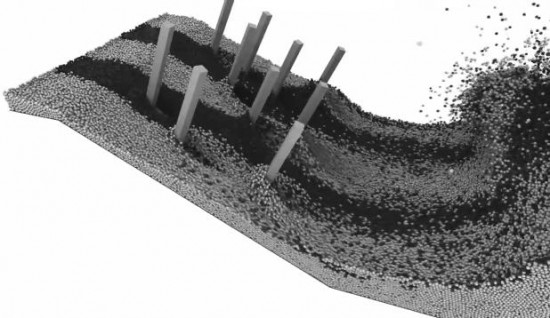 Thiago Costa is my new favorite person (sorry Christoper Nolan). The Brazilian programmer, artist, and animator has held the job of Lead Technical Director at Ubisoft Digital Arts since June 2009. Whilst there, he has been developing a new physics engine (Lagoa Multiphysics) and putting tragically short clips of it onto his Vimeo account. But now we have the first legitimate trailer, and it’s simply incredible. Behold the future of computer-animated physics below:

Now if you’re like me, your initial thought after finding out this guy worked for Ubisoft was “put this in games.” But according to a Redditor, that might not really be a relevant thought. It’s a long, detailed, and worthwhile comment that you should definitely read. The gist is basically that games will not be able to run something this sophisticated in real time, which is obviously necessary for gaming. So as beautiful as this is, it’s not going to immediately impact games. Also, focusing on sand and water and rabbits is more a method of showing off, and it’s unlikely that an engine like this improves the physics for large objects by all that much.

Even so, it’s beautiful to watch and will certainly have an impact. And for those of you who have seen the Inception trailer, you can’t deny that the first ten seconds of this video made you think to yourself “The dream is collapsing!”