Unlikable Characters and the Cost of Female Liberation in Lady Macbeth 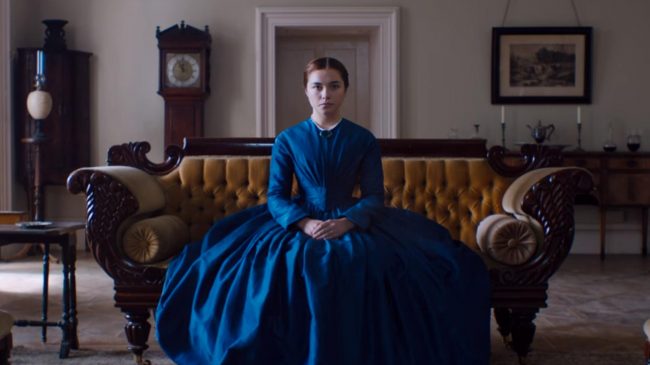 The British film Lady Macbeth, directed by William Oldroyd, immediately shrouds the female protagonist with a murderous and anti-hero air. Shakespeare’s Lady Macbeth was the ambitious wife of a tragic hero known for her ruthlessness and haunting guilt. Oldroyd’s Lady Macbeth, a young girl named Katherine (Florence Pugh), is a wife trapped in a loveless marriage who uses violence in an effort to attain some kind of freedom. That journey, however, is one that rarely fares well for the 19th-century lady.

Lady Macbeth is an adaptation of a 19th century Russian novel by Nikolai Leskov that first appeared in a magazine by Dostoyevsky’s, something that is no surprise considering the very Russian approach to guilt and violence. Still, the British setting, along with certain casting choices, add a new layer of racial tension and commentary on the societal restraints on women.

The story begins with the marriage of Katherine and Alexander, a man many times her age who treats her like an object, demanding she stay in the confines of the house and sexually objectifying her. More than once, he abruptly demands she strip naked as he watches from across the room. In one very uncomfortable scene, he orders her to face the wall while he pleases himself. His father, Boris, is just as controlling. His demands that Katherine quickly produce an heir and behave properly starts to drive Katherine further and further into snapping.

The movie portrays this with constant scene of her looking stifled, trapped in the camera as her hair is tied up, her posture stiff from corsets, and her own manner stiff. Eventually, a small amount of relief arrives when Boris and Alexander leave the estate, and she’s there alone with the servants. It’s at this time that she meets Sebastian (Cosmo Jarvis), a farm hand, as he and other men are suspending a black housemaid, Anna (Naomi Ackie), from the roof.

We’re meant to understand Anna’s pain, and how Sebastian’s physical, as well as verbal abuse (he calls her a “sow”), later traumatizes her as she cries by herself with no one to confide in, as far as we see. However, this element of the plot is mostly pushed aside to focus on Katherine, who is intrigued by this situation and develops an attraction to Sebastian.

In their first confrontation, she forces Sebastian to face the wall and in that moment, she senses a kind of power. It’s in many ways sexual, as the formerly powerless Katherine replicates the control her husband had over her with another man. The two begin a sexual relationship, with Sebastian first forcing his way into her room. This trope, where a man essentially forces himself on a woman because he’s aware of her attraction, is a damaging one that romantic films especially are guilty of. It’s very uncomfortable to watch Katherine give in to such a man, and then essentially fall in love with him despite, or because of, his inability to honor her initial “no.”

This affair, which Katherine pursues and continues with girlish delight, is quickly discovered and leads to the murders that the Lady Macbeth title anticipates. Sebastian suffers a beating and confinement from Boris, so she calmly poisons her father-in-law in front of Anna, who turns mute after the terrifying incident. After her husband confronts her and threatens to put her back in her place, she brings Sebastian into her room and the two murder and bury him.

To watch Katherine kill these two men to preserve her freedom to be with Sebastian is an understandable level of “unlikable.” As a woman in this time, her actions are a resistance to a loveless marriage with oppressive men and an act of rebellion against patriarchal control. We see her suddenly look more at home, her hair is worn down, she’s able to explore the outside, and she begins dressing Sebastian up in fine clothes like he’s the head of the house. However, it’s impossible to ignore how the third act complicates her un-likability with a final murder and a set-up.

After Alexander dies, a woman and a child come to the estate, revealing that Katherine’s husband had fathered a child and now she must care for it. While she bonds more and more with the child who’s of mixed descent, Sebastian grows increasingly angry and the two then plot to murder the child in an upsetting and graphic scene. So what do we see within Katherine, as she goes far beyond unlikable and into fully hate-able once her victims are no longer oppressive men but an innocent child?

After this, Sebastian becomes consumed with guilt and announces to a room of questioners that the two plotted the kill the child and had a full-fledged affair where she pursued him without rest. With a stoic face, Katherine denies the claim and blames Sebastian and Anna for the crime. The two former servants are then taken away, while Katherine remains staring outside her window, fully alone. This plot twist comes as a creative decision from the team, as a point where they diverge from the novel’s plot. 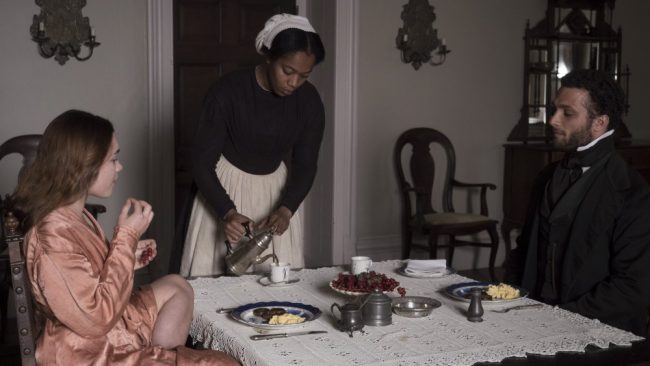 This incident doesn’t come out of nowhere, as we see Katherine exploit Anna on more than one occasion. Earlier in the movie, Anna hides the fact that Katherine drank all the house’s wine and is punished by Boris by being forced to crawl like a dog on the floor. This humiliating incident is almost nothing to Katherine, who simply looks on with no visible guilt or later apology. The space Katherine exists in, both at the mercy of the patriarchs that continue replacing one another, and above the servants like Anna with no means to fight against her, is one that opens up a conversation about privilege and intersectionality.

Unlikable female characters are a special kind of representation in the different ways they can function. Sometimes, the “unlikable” character can make us aware of our own biases, where we realize the standards by which we judge women and men are uneven. For instance, we tend to be more forgiving of male characters for failing to play their familial role, which female characters often don’t get the same treatment.

In the case of Katherine, it’s both a look at a female anti-hero pushing against gendered oppression and a white woman replicating that same kind of damage to the bodies of those below her in rank. When she pins the crime on the two, I was reminded of the moment in Get Out where Daniel Kaluuya’s Chris is standing over Allison William’s Rose and she cries out for help to a cop car. In that moment, the audience is filled with fear and anger because they understand how the rhetoric of protecting white women fuels biases and anticipate the authorities falling into Rose’s weaponization of white womanhood.

Katherine’s “freedom” comes at a sacrifice, and the fact that it is only maintained through the sacrifice of her lover and the body of a black woman (after the murder of two men and a child) holds some undeniable subtext. It is a fact within the feminist movement, that white women have often excluded black woman and even prospered at their expense. The big advertisement for Lady Macbeth outside my theater sang praises for the film’s feminism and feminist message. I have to question whether that’s an appropriate title for the film.

While I won’t suggest Lady Macbeth endorses any of its protagonist’s behavior and I definitely subscribe to the idea that we need to allow female character more space to make terrible decisions, to label this film feminist is somewhat misguided. It’s difficult because “feminist movie” tend to blur with “feminist characters,” and that doesn’t feel accurate here. I don’t have a great answer, but Lady Macbeth is a valuable film to examine feminism.

Lady Macbeth, takes an unflinching look at the oppression of women in the 19th century and the extreme lengths required to find any solace or freedom. It portrays an murderous girl who fights against notions of proper femininity while also addressing her own complicity in violent structures. Whether intentional or not, it is a film that draws out a conversation about the different kinds of female liberation and gestures towards a history of white violence.

It is impossible to talk about Katherine’s character without also examining how she exploits Anna. As the film progresses, the voiceless Anna who is constantly mistreated and taken advantage of, becomes a stand-in for the greater communities that have often been voiceless, or made voiceless. While I don’t know if the creators meant for it to be so, she is the true center of the Lady Macbeth narrative.