How Old Is Too Old For the Junior’s Section? 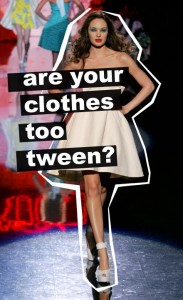 There comes a time in every woman’s life when she realizes she’s too old for the junior’s section. And she is sad for a moment, because it means she’s outgrown her youthful, nubile figure and now sports a mature, developed one. (And if she still wants “nubile,” she’s going to have to work at it.) But then she realizes that for the most part, the strange period of awkwardness with limbs and flesh growing at alarmingly inconsistent rates has ended. Now, it is just a matter of keeping horizontal expansion at bay. So, no more late-night runs to McDonald’s for ironic Happy Meals. Fine. They gave her heartburn anyway.

But every once in a while, she’ll venture back into the junior’s section, or a junior’s store, and find something cute. Irresistibly cute. And she’ll just buy it in a larger size and remove the tag. Because it must be okay to wear as long as it fits, right? If one has the attitude to pull it off, it’s good, right? … Right??

And she may ask herself the following: Is 31 too old to shop at Delias? Like, does she have to stop now? Is her youth over? Is she too old to pull this off, even though something fits just fine, even if it’s two sizes larger than she has to buy in women’s stores?

This dilemma begins at the dawn of adulthood, when one’s awkward teenage years are over. And everyone’s teenage years are awkward. There is no getting around it. A teenager who avoids looking awkward is a rarity, like an albino lovebird, and a teenager who isn’t self-conscious is probably lying. Once past this, there’s a phase of feeling like you’re past “growing,” and simply settling into this new body. But it still might not feel quite right, because you’re so used to feeling “wrong,” and the last thing you want to do is wear something that causes people to look at you. And by the time you feel pretty good about yourself and ready to be looked at, you’ve “aged out” of the fun apparel. Because for better or for worse, it’s just not right to wear some of those clothes.

Now, the totally hypothetical woman in question is not talking about wanting to buy the super cutesy, trendy stuff. Most of us realize that at a certain point, miniskirts are just out of the question. But even the basics – solid-colored tees and thermals, maybe jeans – feel like they’re totally mocking Hailey Hypothetical when the number closest to her size in the Gap refuses to travel above her knees. “See? Your childbearing hips cannot handle these garments any longer! Get thee to Sears for a sensible pantsuit, elder stateswoman!”

But then again, what constitutes “age appropriate”? When we see women in their 30s wearing Uggs and neon, we laugh at them. What are they trying to prove? Because whatever they’re holding onto is clearly asking to be let go. Is it a matter of reality setting in, walking into a Delias store and thinking, “If I had been an attractive, careless teenager, I could be that girl’s mom”? Is it a less expensive option than plastic surgery? What does adulthood (beyond young adulthood) have to look like? Are we to believe that once surpassing a defined life event, say, motherhood, that we’re all going to be issued a pair of pleated, elastic-waist jeans, a box of sugar-free chocolate, and a DVD collection of Nancy Meyers movies?

This comes up a lot on the TLC show What Not to Wear. A lot of the women who agree to become subjects are simply afraid of looking old. They still have energy and ambition, and they think that these qualities are embodied in the juvenile fashions they refuse to give up. (Granted, these women go way beyond wanting to wear a super kickass Spider-Man t-shirt once in a while. Shoot, one woman insisted on wearing full-on toddler-style clothes.) And when those clothes go in the trash, then it’s all over. Now they have to give it all up and hand themselves over to a completely selfless, nun-like lifestyle. On the flip side, some of them are simply hiding the fact that they’re super, super self-conscious about their bodies. (The lesson of the show: You can dress any body type well. But this does not include over-sized souvenir t-shirts, anything with cats on it, or clothes from the porn store.)

But for those of us who are past these issues and are finally comfortable with ourselves (and proud of ourselves for overcoming those former insecurities), can’t we wear something that lets us show off a bit? Are we bragging? Um, yes! This is victory, bitches. But let’s make a pledge: when we shop in that tween scream store, we promise not to get anything with puffy sleeves or Care Bears on it. (Spider-Man is hereby acceptable, because superheroes are less childish than stuffed animals. And because I said so.) But we will be showing off the arms we worked into toned masterpieces with something less ridiculous and appropriately fitted.

Maybe clothes are the last outwardly visible bastion of youth. Maybe if we can’t hold onto anything else and have to face life — which we’d been able to avoid with blissful ignorance back when we could scour the racks at Delias — we can do it while maintaining a cute façade. Yeah, we’re not kids anymore. But if I — er, Hailey Hypothetical can get away with jeggings, then damnit, she will. Nothing can stop “her” from finally not feeling self-conscious about “her” ass.