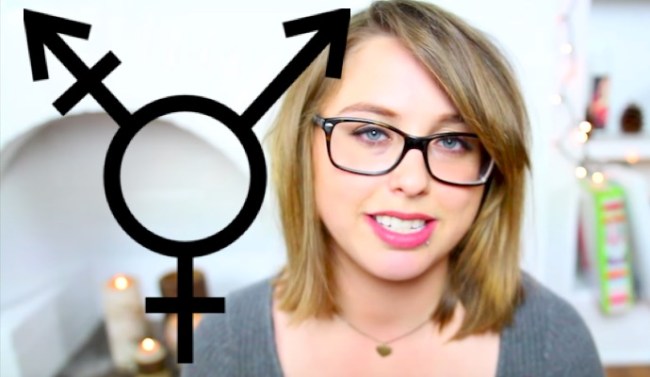 If you consider yourself a YouTuber—which to me has always sounded like some manner of root vegetable—you probably know about Laci Green. She’s been on YouTube for over ten years, hosted MTV’s first channel, Braless, and recently was honored by Time as one of the most influential people on the Internet (over a million followers don’t lie). Green’s used that platform in the past to promote sex positivity and call out misogynist harassment, making her what most people around these parts would call a Pretty Good Person.

Then she started hanging out with the alt-right and everything she stood for went straight to hell.

I’m not here to break down what happened to Laci and why; the above article (by the inimitable Katelyn Burns) does that so thoroughly I’d be wasting my time. To be frank, I was one of the few people who had barely even heard of Green until a few months ago. I dimly recalled the time she apologized for saying “tr-nny” in a old video, but not much else.

So it came as something of a shock to find out that Laci knew me—or rather, she’d seen my work and decided to broadcast it to her followers in the worst possible way.

A little over a year ago, when my job here at TMS could best be summarized as “the one who knows how Tumblr works,” I wrote my first freelance article for The Establishment. I’d been transitioning for about six months and was starting to notice how bonkers certain aspects of hormone therapy can be. My then-girlfriend, also trans, complained of a weeklong bout of nausea, intense abdominal cramps, heavier-than-usual mood swings, and weird cravings—what she half-jokingly called her period, since it cycled roughly every month. “I thought the good part of being trans was that I wouldn’t get those,” she muttered darkly.

Hearing this made me utterly fascinated. I checked with other trans women and transfeminine people I knew, and a few reported similar symptoms. But try as I might, I couldn’t find any medical literature on the subject. Although some of the symptoms I’d heard thus far were known side effects for common hormone therapy medications like spironolactone, progesterone, and estradiol, the fact that they mimicked something everyone seemed to think was impossible piqued my interest. So I decided to do a little research.

My method was as bare-bones as they come: I put out a call on Tumblr—gotta stay on #brand, kids—for trans-identified people who were assigned male at birth, currently taking hormones, and who experienced “period symptoms.” Some great conversations began as a result, and I started writing in earnest. But the majority of responses were from trans-exclusionary radical feminists, or TERFs, who were shocked and appalled that I’d even conjure the possibility of such a thing. “Holy shit how fucking delusional can you get,” wrote one; “TRANS WOMEN ARE MEN WITH SOME SERIOUS MENTAL ILLNESS,” screamed another (“trans males” or just “males” is a common way for TERFs to describe trans women). The one that truly frightened me read “I’ll gladly help them if they want to bleed from their genitals once a month.”

Again, all this anger came from the certainty that what I was describing—symptoms similar to periods and/or PMS in people born without a vagina or uterus—couldn’t possibly exist. “Just because you shot your estrogen up your ass doesn’t mean you grow a damn functioning uterus,” someone groused. (Note: estradiol isn’t a suppository. I can’t stress this enough. If you are putting estrogen in your butthole you are officially doing it wrong.)

Others were more exact: “Transwomen do not experience period or period-like symptoms because they lack every biological asset necessary for a period,” one wrote. “[N]o uterus to contract, no ovaries to ache, no eggs to be released, no lining to be shed, no vaginal canal to carry the fluid outside the body.”

What baffled me about that sentiment was that it was so close to my own thesis—the TERFs just weren’t following through to “but it happens anyway, which is wild.” While this flame war was raging in my mentions, I was collecting reports of cyclical cramps that mimicked uterine contractions, nausea bordering on morning sickness, even diarrhea—which is a less common but nasty symptom connected to menstrual cramping. And just like with cis women, the trans folks I talked to described symptoms ranging from mild and inoffensive to excruciating. (Note: if any medication you take leads to severe pain, talk to your doctor, especially if you’re biohacking your endocrine system.)

Naturally, when the article came out, TERFs had nothing good to say, and I certainly didn’t get any apologies (not that I expected them). Most seemed to just read the title and get mad for the same reasons as before, totally ignoring the diverse testimonials I’d collected. But I was mostly happy that even more trans people started sending me messages saying “Me too, I thought I was the only one.” I chalked it up as a W and moved on.

So what does this all have to do with Laci Green?

Well, in her newest video “How Many Freakin Genders Part 2,” Green cites my article. It’s practically a blink-and-you’ll-miss-it moment; I wouldn’t even have noticed if a friend of mine hadn’t pointed it out. About seven minutes in, while discussing why it’s vital to maintain current taxonomies of “biological sex,” Green posts an out-of-context screenshot of the last paragraph of my piece—a glib joke about how “periods aren’t just for vaginas anymore,” because I am a dork—and makes some faces worthy of the Get-A-Load-Of-This-Guy Cam. “Pseudoscience runs amok on feminist blogs,” she marvels, furrowing her brow, “where people now argue that males get menstrual cramps too.”

Green is generally quick to say that she respects trans people’s gender identities, and maybe she thinks she does. But here’s the thing: Green’s whole sticking point—that we have to call trans women male and trans men female because SCIENCE—is actively disputed by scientists. Sex is a diverse spectrum, just like gender. Demanding strict adherence to inexact taxonomies is a mistake that, for one thing, perpetuates harmful cultural stigmas. For example, the idea that cisgender men who like to sleep with trans women are “same-sex attracted” is a one that leads to “trans panic” violence as straight men attempt to prove they aren’t gay; it’s also an idea that Green endorses. “Male” and “female” are approximate terms. Is it really so absurd to push those linguistic boundaries and try to capture more nuance?

What incenses me personally about all this isn’t just that Green is dramatically wrong, or that she misrepresented & misquoted my work on a grand scale. (I’m far from the only one she’s done that to.) It’s that she’s done both of those things in a way that precisely mimics all the TERF abuse I got for trying to engage in actual scientific inquiry, however anecdotal: the mockery and hate and fervent wishes that I would experience agonizing pain for daring to wonder how my sisters’ bodies worked. And at the same time, Green expects everyone to see her as a courageous fighter for truth and reason, someone who respects trans lives but isn’t afraid to be “gender critical” in the name of upholding the scientific method.

I said on Twitter earlier this week that I was sure Green herself is a TERF. But that’s not necessarily accurate, because there’s nothing radical about what she’s chosen to do with her platform, and she doesn’t really fit some of the far-out bits of TERF ideology. (Hey, look at that! I revised a theory!) My new best guess? Laci Green is a centrist in TERF drag, parroting talking points that she barely understands because she’s realized anti-feminism and transantagonism can make her a lot of money. Her once-activist ethic is now reactionary; her enthusiasm for real science has shriveled.

But even if Green believes in everything she’s said, that doesn’t make it better. It just means that she really doesn’t see anything wrong with what she’s saying or doing, even if that includes wildly misinterpreting people’s statements to make them look foolish in front of hundreds of thousands of people. When you get right down to it, I don’t especially care whether Laci Green is a TERF or just doing a really good TERF impression. I just wish she’d stop.

Sam Riedel is a former Contributor Coordinator and social media editor at The Mary Sue; for the purposes of anthropological inquiry, she’s all woman, baby. Her work has lately been published by Bitch Media, Vice, and The Establishment. Follow her on Twitter @SamusMcQueen for red hot pro wrestling takes and irregular selfies.