Enough With the Pearl-Clutching Over Kyrsten Sinema Confrontation Video 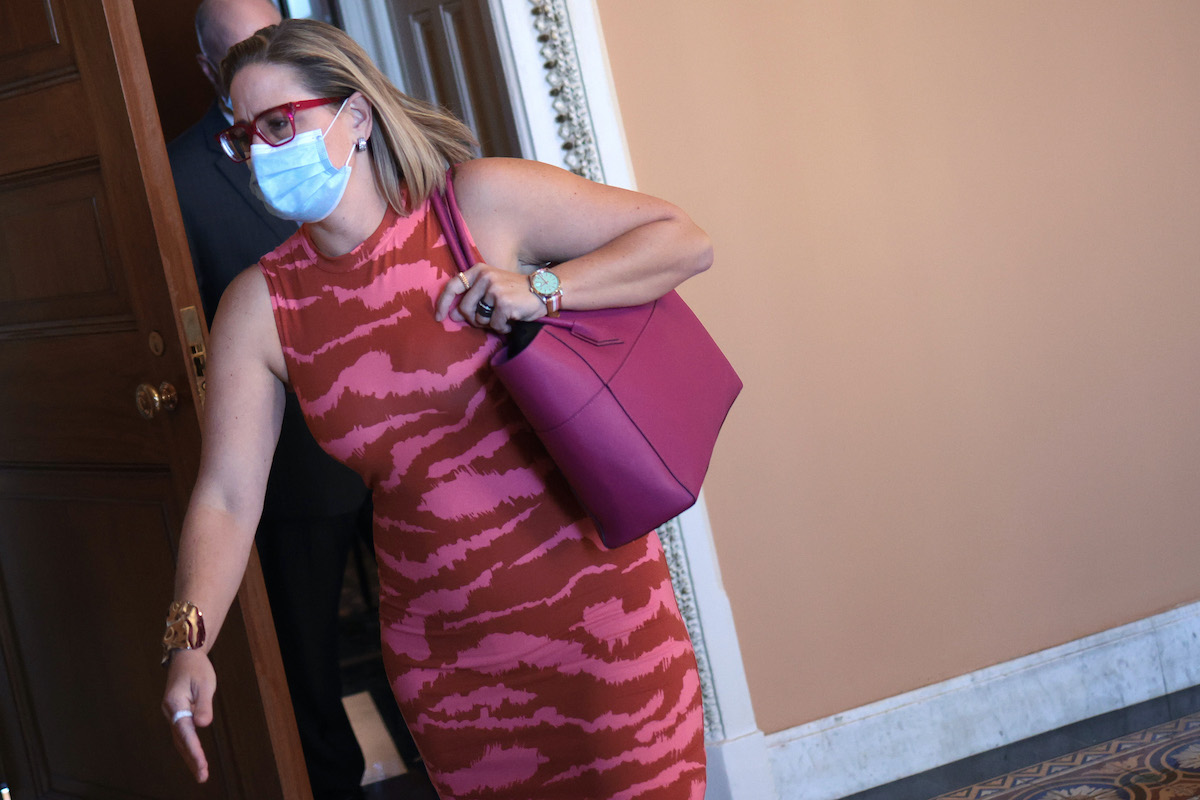 Over the weekend, a small group of activists confronted Kyrsten Sinema at Arizona State University, where the senator also teaches. In the filmed encounter, the young organizers follow Sinema from her classroom, through a hallway, and into a bathroom, urging her to support President Biden’s Build Back Better plan, which she has been obstinate in opposing.

“We knocked on doors for you to get you elected,” says one of the activists, who later identifies herself as Blanca. “And just how we got you elected, we can get you out of office if you don’t support what you promised us.”

Blanca tells Sinema through a closed stall door that she was brought to the United States when she was three years old. She says both of her grandparents were deported in 2010 and that two weeks ago, her grandfather passed away. She says she was unable to attend his funeral because of her lack of citizenship, and because there is currently “no pathway to citizenship.” Biden’s reconciliation proposal includes sweeping immigration reform, including legislation providing people like Blanca and many others a pathway to citizenship.

🔴BREAKING: Blanca, an AZ immigrant youth confronts @SenatorSinema inside her classroom, where she teaches @ ASU. “in 2010 both my grandparents got deported bc of SB1070…my grandfather passed away 2 wks ago & I wasn’t able to go to Mexico bc there is no pathway to citizenship.” pic.twitter.com/JDZYY2fOD2

Since that video went viral, there has been a predictable amount of handwringing about civility and “intimidation” and everything else you’d expect. Sinema posted a lengthy response to Twitter chastizing the group, writing that it “was not a legitimate protest.” Donald Trump’s #1 Nazi Stephen Miller tweeted that the activists were “stalking” Sinema and cruelly bemoaned the lack of immediate deportation. CNN called it “confrontation culture taken too far.”

Meanwhile, The Week published an op-ed criticizing the organizers for their lack of “persuasion,” arguing that tactics like these “run the risk of alienating those officials as well as members of the broader public who sympathize with lefty causes but are averse to intimidation.”

Imagine being so concerned about decorum that you worry about “alienating” Kyrsten Sinema. This is a woman who has taken it upon herself to nearly singlehandedly stall legislation that is overwhelmingly popular with voters of all parties, including her own constituents. A woman who constantly and gleefully votes against her constituents’ well-being. A woman who abruptly leaves negotiations on the very legislation she shut down to attend fundraisers with wealthy corporate donors.

Sinema has already effectively alienated herself. She has made it clear she holds no interest in hearing from her constituents, meeting exclusively with high-rolling donors. And in behaving so antithetically to how she presented herself during her campaign, she has essentially stolen her constituents’ votes and fled.

If it becomes clear that the only way to influence a congressperson is by giving them money, then people without money are going to bother them in the bathroom. That’s the deal.

If these activists make Sinema feel encroached upon by engaging her in a non-political space, who actually cares? Protest isn’t supposed to make everyone feel comfortable. If it does, it’s easy to ignore, which is what Sinema has been doing to the people who chose her to represent them.

And if some Democratic voters see this video and disapprove so heartily that they end up voting Republican, well, I just wonder why we’re supposed to place their delicate feelings above those of these young people who, after working so hard to engage with our political systems and elect a candidate they believed in, are now forced to beg that same person to follow through on her promises—promises that, when broken, put their well-being and even their very lives at risk.

As LUCHA Arizona wrote on Twitter, “We wouldn’t have to resort to confronting @senatorsinema around Phx if she took meetings with the communities that elected her. She’s been completely inaccessible. We’re sick of the political games, stop playing with our lives.”