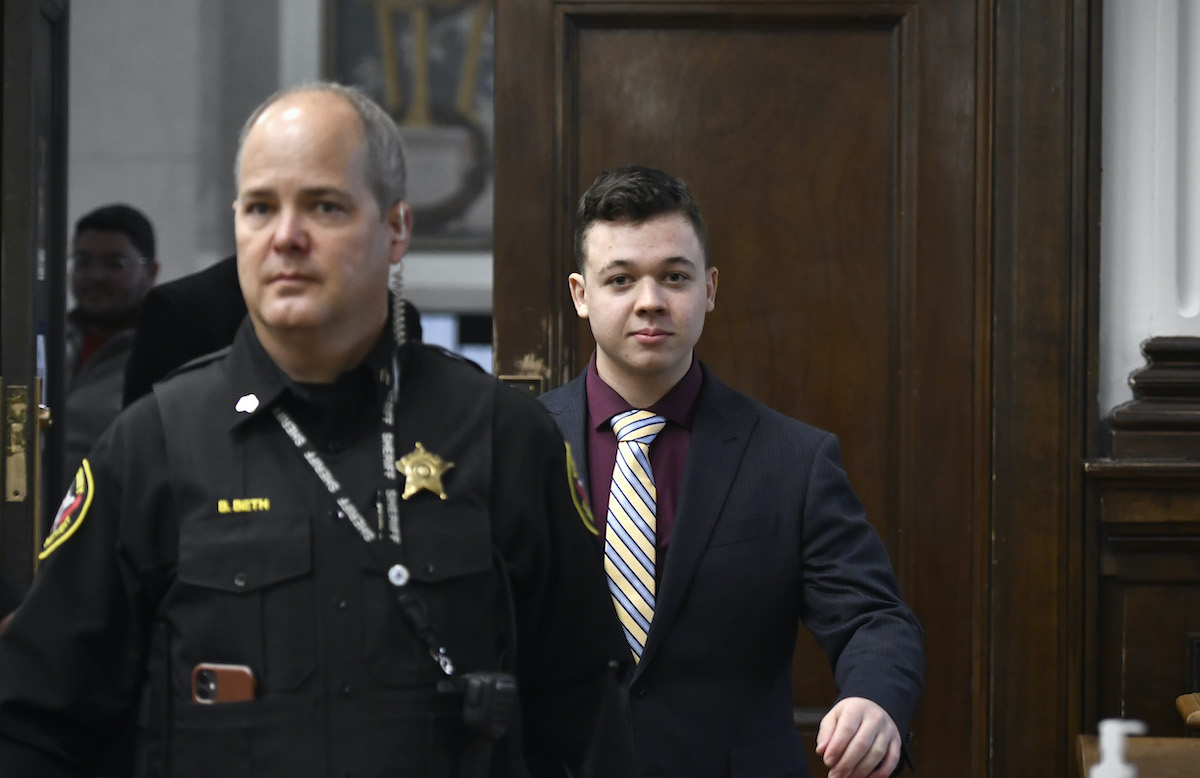 Kyle Rittenhouse took the stand in his own murder trial Wednesday. The now 18-year-old shot and killed two people and injured a third while acting out a twisted vigilante fantasy during a Black Lives Matter protest in Kenosha, Wisconsin last summer. Yesterday he testified in an attempt to convince jurors that he was acting in self-defense.

Rittenhouse’s testimony was maddening, as the prosecution called out his many lies about what exactly he was doing in Kenosha that night, after traveling there from his home state of Illinois and illegally obtaining an AR-15.

But the strangest moment of the day came when Rittenhouse appeared to break down in tears during his testimony. I say “appeared” because, well, see for yourself:

#dramatic scenes at the #KyleRittenhouseTrial as Mr #Rittenhouse begins to cry while on the stand. pic.twitter.com/kX6ULWYJq4

Viewers were not convinced.

“Hello 911? He was black, my name is Karen” pic.twitter.com/cA0jcYazq0

White privilege is illegally carrying a weapon to an event with the intent to use it, murdering two people, then getting up on the stand and crying about being the victim. (And of course he’ll be acquitted.) https://t.co/iaUjGWbxmF

Even the dictionary weighed in with an apt subtweet:

The term ‘crocodile tears’ (a superficial display of anguish) comes from a medieval belief that crocodiles shed tears of sadness when killing their prey. https://t.co/tkuVCEbBRa

Infuriatingly, Rittenhouse’s charade worked and the judge allowed him to take a recess to compose himself. That’s not exactly surprising, given that this is the same judge who said he would not allow the people Rittenhouse shot to be referred to as “victims” (which is actually not entirely uncommon) but would allow them to be called “rioters,” “looters,” or “arsonists” in court (which is VERY UNUSUAL and blatantly biased!).

Judge Bruce Schroeder appeared to show his prejudice numerous times Wednesday. He repeatedly interrupted the prosecution to stop reasonable and pertinent lines of questioning, like here, where Rittenhouse is being asked why he was carrying an AR-15 in the first place—a pretty relevant question.

He also made the jury watch footage of the events in question in miniature form after buying the defense’s argument that Apple’s pinch-to-zoom function manipulates data via artificial intelligence—something that is simply not true.

Been just staring into the distance with every update about Judge Schroeder, because I dunno how to cope with someone this flagrantly dumb and racist right now. The justice system, again, real fucked up. This idiot has so many lives in his hands. https://t.co/8NuK5cbWE2

At one point, Schroeder’s phone went off and everyone got to hear his ringtone: Lee Greenwood’s “God Bless the U.S.A.” While the song is nearly 40 years old and a pretty generic patriotic country number, many people also noted that in recent years, it’s been tightly associated with Donald Trump’s presidential campaigns.

“God Bless the USA” is the opening song played at every Trump rally.

It is the ringtone of the judge in the Kyle Rittenhouse murder trial. https://t.co/HpqpTj56ud

Schroeder and prosecutor Thomas Binger repeatedly argued during yesterday’s trial. At one point, the defense asked the judge to declare a mistrial with prejudice, which would mean prosecutors could not retry the case. Schroeder didn’t declare a mistrial, but he did seem to consider it.

The entire day, start to finish, was a complete farce.