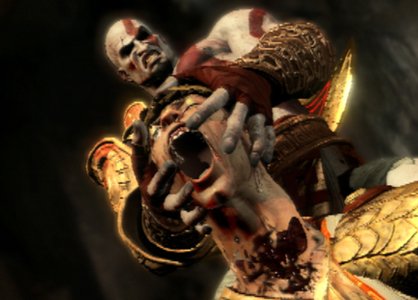 The January issue of the Official PlayStation Magazine is reporting that Kratos, main character, rage personified, and unstoppable murder machine from the God of War series, will be a playable character in the PlayStation 3 release of next year’s Mortal Kombat reboot, which is currently set release in March. Not only will Kratos be a playable character, but he’ll have his own combat moves (Cyclone of Chaos, anyone?), fatalities, and a God of War themed combat arena. Not to mess with the canon of the new Mortal Kombat’s story, Kratos won’t be playable in story mode.

Creator of God of War, David Jaffe, commenting on his Twitter about a possible moveset for Kratos, in reference to the God of War series’ iconic, mostly comedy-based “sex with women” minigames:

Dude Kratos would have a F**KALITY and f**k the S**T out of Sonya AND Katana at the same motherf**king TIME!!!! :)

Kratos appeared in the PSP’s Soul Calibur: Broken Destiny, among other games in which one wouldn’t expect to see the god killer, but Kratos appearing in Mortal Kombat is like a match made in Hades. Sure, Soul Calibur is a fighting game, but Mortal Kombat is pretty much a game about brutal murder–something no one does better than the grey Ghost of Sparta: Did you see the title pic for this post? That’s Helios. You know, the god?

I wonder if the Mortal Kombat developers are going to make Kratos invincible, since whenever he dies, he just murders everything in Hades and climbs back out.