Serving eight to nine lives, time off for good behavior. 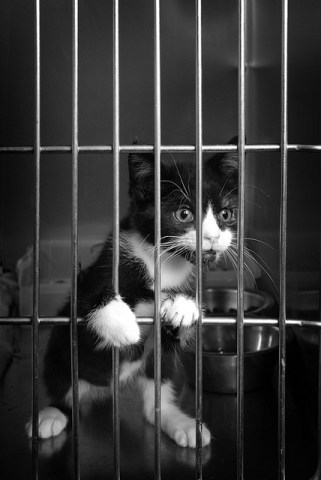 The NY Correctional System is a place that most of us never want to experience. Unless we’re kittens, apparently. A litter of four hardened felines has reportedly conned their way into the Great Meadow Correctional Facility in Upstate NY.

The gang was recently discovered in the basement of the correctional facility and has been cared for since by inmates and prison staff, doing time in a 12 by 3 foot “kitty condo” built for them by an inmate. Doc, Annie, Comstock and Meadow (all named after correctional facilities in the area) have been passing their sentence by chasing light between the bars, scratching tally marks on the wall with their itty bitty claws, and cheering up inmates.

Though cared for mostly on weekdays by the prison’s Head Electrician Bruce Porter, on weekends they are watched over by an inmate nicknamed “the Cat Whisperer.” (Obviously, because this is a Lifetime Movie.)

The kittens will likely be eligible for purrole by the spring, and Deputy Superintendent of Administration Jeffrey Lindstrand recommends that all those who are interested in helping them reintroduce to civilian life call his office to set up an adoption.

We’d offer to take them in ourselves, but we’re way too busy what with all these onions we’re cutting.