We are the endless appetizers. 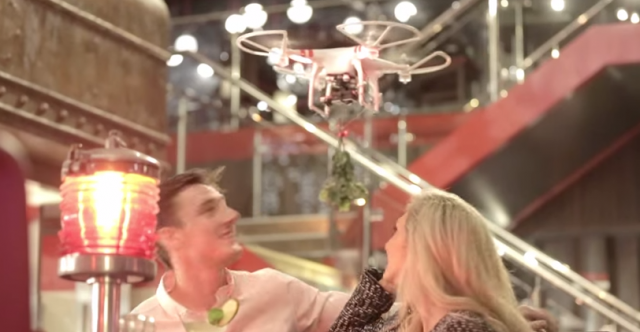 Last month we covered TGI Friday’s “Mistletoe Drone” program, the franchise restaurant’s initiative to encourage holiday cheer while simultaneously satiating their robot overlords’ lust for power. Rarely has our snark been so justified. Blood hath been spilt in Brooklyn.

Over the past weekend, a local reporting team from Brooklyn Daily went to the Sheepshead Bay location to cover the New York debut of the kiss-copters. The TGI Friday’s then deployed two of their murder machines, one of which was a 23-inch drone with six rotors and no prop guards. According to Brooklyn Daily:

The two remote-controlled helicopters dangling sprigs of mistletoe were intended to spread holiday romance, but one of them flew out of control and clipped Courier photographer Georgine Benvenuto in the nose with one of its spinning, uncovered blades.

“It literally chipped off a tip of my nose,” said Benvenuto, using tissues to stanch the blood. “It took off part of my nose and cut me here, right under my chin.”

Benvenuto said she’s just thankful she wasn’t blinded in the name of love.

TGI Friday’s seemed unconcerned by the incident, and reminded customers that “earlier Mobile Mistletoe events in Long Island and Texas incurred no casualties.” (TGI Friday’s! Endless appetizers, low chance of robot-on-human murder!) Diners who witnessed the carnage were equally nonplussed. According to Karim Turner of Yonkers, who apparently is one tough mother, “I’ve seen far more worse blood than that.”

In some of my favorite local news coverage ever, another diner was even inspired by the incident to acquire a drone for his own personal use:

Another man, who happily kissed his wife under the heavy downdraft of the larger drone, said the flying toy might even make a good Christmas gift for his wife.

“If you wanna bring it to the house, she’s gonna blow dry her hair with it,” said George Gonzales, who has been coming to TGI Friday’s with his wife for their twice-a-week “date night” for almost 16 years.

Hold tight to your faces, Mr. and Mrs. Gonzalez. I know a drone who would wear them like a mask.