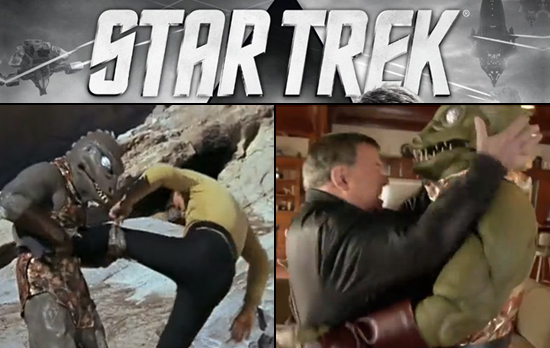 If you haven’t seen much original Star Trek before, you’re going to want to at least watch one brief, and very (in)famous, clip in a moment. A clever and hilarious new trailer for the upcoming Star Trek video game features William Shatner once again battling the Gorn in hand to hand combat.

The video game itself is debuting on April 23rd. It’s a third-person “bro-op” adventure game that lets you control young James T. Kirk and Spock during the time between the two latest movies — Star Trek (2009) and Star Trek Into Darkness (2013).

And the Gorn? The Gorn, who are featured in the game, and have cropped up in other Star Trek shows and books, are a bipedal reptilian race who sure do move a lot more swiftly in these later incarnations. Come to think of it, so does Kirk.

Before or after watching the trailer, check out the clip from the Star Trek espide “Arena,” because it ranks in my book as one of the most enjoyable pieces of cinema.

The original battle between James T. Kirk and the Gorn: