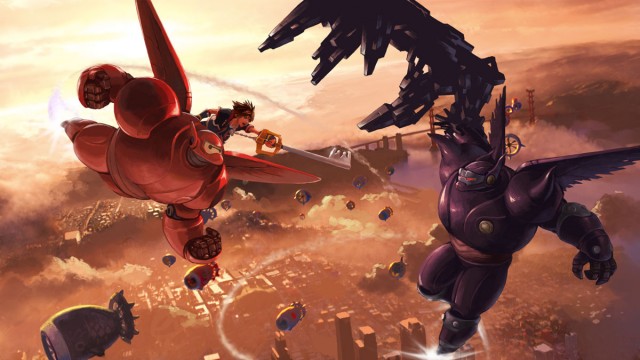 The concept art (pictured above) for the planned inclusion of San Fransokyo displays Kingdom Hearts protagonist Sora riding on an armored Baymax, swinging a keyblade at a robot who also looks like Baymax … if Baymax went through a goth phase, maybe. Looks like we should hope for some decent flight mechanics and maybe a small glimpse or two at the sprawling depths of the cyberpunk city of Big Hero 6.

If you want to hear a little spoiler-y hint as to where that Dark Baymax hails from, read on! Hashimoto has revealed that this goth Baymax is actually the Baymax who got left in the portal at the end of Big Hero 6, and the antagonists of Kingdom Hearts III found him and imbued him with the powers of darkness. So, Kingdom Hearts III will navigate the same thematic paths as prior games, by including “twin” versions of characters facing off against one another.