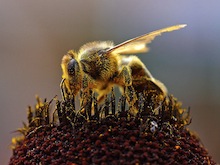 This is both adorable and encouraging: A group of eight- to ten-year-olds in England wrote and published a journal article in the very legit “high-powered” scientific journal Biology Letters. According to an excerpt from the article’s abstract, the study covers “whether bees could learn to use the spatial relationships between colours to figure out which flowers [to visit].” With the exception of the abstract, the kids wrote the entire article themselves. What have our kids been doing lately?

The 25 kids, who attend Blackawton Primary School in Devon, England, conducted the study through the educational science program, “i, scientist,” which encourages children to conduct their own scientific research and is overseen by the kids’ head teacher, David Strudwick, and neuroscientist Beau Lotto, whose son, Misha participated in the study. (There’s a half-hour video about the program here.) The kids are officially “the youngest scientists to publish an article in a Royal Society journal.”

i, scientist teaches kids to approach experiments as games. In this case, the game involved the bees’ behavior towards sugar water and salt water dispensed through tubes that were connected to blue lights and yellow lights. Are the bees attracted to certain colors? Will they visit the same color if the water (standing in for nectar) is different? And is this related to how the bees determine if they’ve already visited a certain flower, or if they can distinguish a harmful flower? They recorded the bees’ behavior in colored pencil: 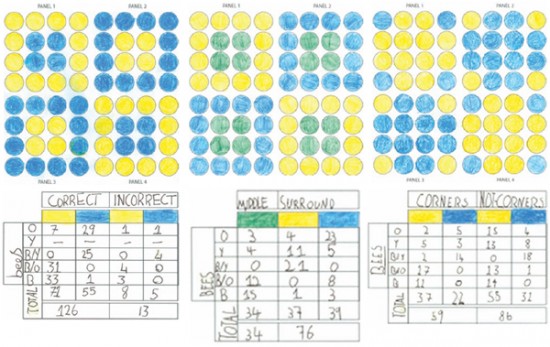 So, what was their conclusion?

We conclude that bees can solve puzzles by learning complex rules, but sometimes they make mistakes. They can also work together (indirectly) to solve a puzzle.

Biology Letters generally requires a subscription, however the “Blackawton Bees” article will be available for free until the new year. This might be the most funtastic scientific journal article you’ll ever read by the most non-jaded scientists ever. And you will smile so hard.

(via Royal Society Publishing via Discover via Gawker)