Kickstarter Backers Are Mad at Oculus Over Facebook Deal, But Maybe Everyone Should Just Chill Out

Too bad the Internet is fueled by pure fan rage. 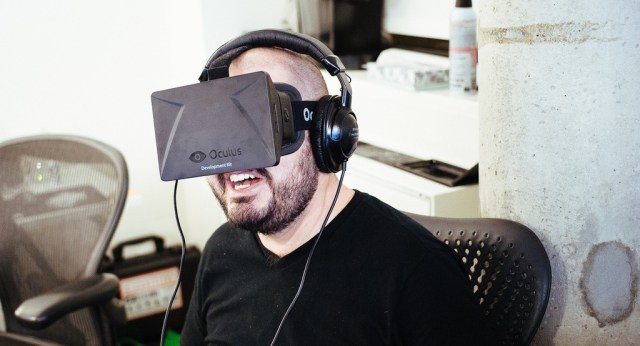 Man, people are really upset over the whole Oculus Rift/Facebook deal, and perhaps most understandably, their backers on Kickstarter are feeling the most betrayed. Still, maybe we should all pause for a moment of sanity before making any Vines of throwing a Rift in the garbage.

Since the announcement last night that Oculus had sold to Facebook for $2 billion dollars, angry backers have been sharing their thoughts and feelings on the Oculus Kickstarter comments page. Some backers are just a bit disappointed, like John Susek, who said, “I’m disappointed. You had the potential to become bigger than Facebook on your own.”

Then, there are the people like Jason Baxter, who are pretty upset, saying, “Disgusted. Did you have to stoop so low? Really?”

And then, some are furious and completely disillusioned like Sergey Chubukov, who wrote, “You selling out to Facebook is a disgrace. It damages not only your reputation, but the whole of crowdfunding. I cannot put into words how betrayed I feel by this.”

Whoa, let’s just back up a bit, everyone, and look at this logically with our hurt feelings suppressed for a moment. I can think of a whole lot of reasons for the Oculus team to sell to Facebook (approximately 2 billion reasons), but what about the people who backed them on Kickstarter? Should they be upset?

Probably not, and not just because I think a lot of them have an overblown sense of entitlement. After realizing how upset everyone got by the sale, Oculus founder Palmer Luckey headed over to Reddit to answer some questions and assure fans that nothing about Oculus was going to change.

You can read the whole thread on Reddit, of course, but the important thing is that he’s promised that you won’t need to log in with Facebook to use your Rift, and any ads will be the choice of the software developer and not mandated to appear on the hardware by Facebook. Basically, people are interpreting the Facebook deal to mean that Rift’s VR software will come from and work directly through Facebook, but they’re missing the point that the Rift is a piece of hardware that developers are free to develop any software for.

That’s the benefit of a VR headset that’s not tied to a console like Sony’s Project Morpheus is tied to PlayStation, and it’s a benefit that Luckey has promised won’t change with Facebook. I’m sure Mark Zuckerberg has a ton of software ideas in mind for using the Rift in conjunction with Facebook, but it’ll be a piece of PC hardware that you’ll be able to use with software from different developers just like any other monitor, joystick, or mouse.

This is where the people who are upset about the deal kind of lose their footing, because they respond to statements like this with responses like, “But you can’t trust Facebook. They’re going to make it proprietary and fill it with ads and make it a tool for gathering data.” I understand that line of thinking, but it’s completely unfair to start slinging insults and talk of betrayal at Oculus without even waiting to see if those fears come true.

For instance, I completely understand why Markus Persson would back out of the Oculus/Minecraft deal until he knows how everything is going to play out, but that doesn’t mean we’re never going to get Minecraft on the Rift. It might, but it might also mean that it doesn’t come to the Rift until Persson sees that Facebook’s involvement hasn’t changed anything.

It also doesn’t mean we’re never going to get Minecraft in virtual reality. The other thing the angry backers seem to be forgetting is that Oculus doesn’t own VR. If the Rift becomes nothing more than a way for you to look at pictures of your friends’ pets and babies on Facebook all day so they can sell ads and mine your user data, that doesn’t mean it won’t pave the way for VR as a whole.

Whether you’re a fan of Mark Zuckerberg’s methods, and Facebook’s by extension, or not, he’s betting big on the future of technology. He wants to put the Rift in as many homes as possible as quickly as he can, and getting people to buy a new form of technology is the hardest part of the virtual reality struggle. If Facebook’s Oculus plans to make the Rift cheap to buy and accelerate its development are successful, it’ll get society as a whole to understand and accept VR as something they want in their daily lives, which should lead to faster adoption of VR hardware and then wider support from software developers.

At that point, what you’re upset about is that the headset you initially backed (the Rift), was used to get VR into the public consciousness, but an almost identical product with a different name winds up being the one that you play most of your video games on. To me, that seems like a very minor sticking point when we’re talking about a technology revolution like virtual reality.

Either way, Oculus Kickstarter backing dollars won’t go to waste, and I’m 100% sure of that. Other companies are already seeing the positive response to the Rift and trying to capitalize on it for themselves. If the Rift crashes and burns because of Facebook, another headset will almost certainly rise to take its place, and it will have Oculus to thank for opening up the market. Your donation was not made in vain.

And that’s what the backers seem to be most upset about. They’ve commented that, with the grand talk on the Oculus Kickstarter page, they thought they were backing an idea and a future more than an individual company that could be sold out from under them. In their complaints, they’re missing the fact that this sale doesn’t kill that vision that they contributed to.

One way or another, this technology is the future, and every dollar donated to Oculus has helped make that possible.

(via Wired, The Verge, Engadget and, image via David Zhou)