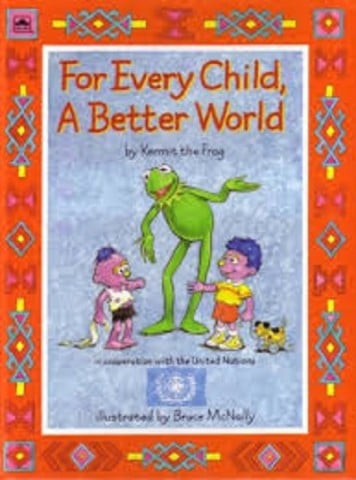 It doesn’t get more myopic and ridiculous than this, folks. Mary Carney, a Marshfield, Wisconsin School Board member is currently fighting what she thinks is a worthwhile fight for the children of her state. She wants to ban the Muppets book, For Every Child, a Better World from the kindergarten curriculum. Why? Because it’s “too graphic” for their pristine little heads.

For Every Child, a Better World was created by Muppets Press in conjunction with the United Nations to raise funds for their efforts against poverty, and is dedicated to the memory of Audrey Hepburn, who was a Goodwill Ambassador for UNICEF and did lots of humanitarian work in her life, specifically focusing on children. It’s a book narrated by Kermit the Frog that attempts to explain to elementary school kids, in an age-appropriate way, that there’s poverty in the world and that we should all maybe try and do something about it.

Its goal is to raise global awareness and is set to be used as part of this school district’s curriculum in early 2016. So, what’s “graphic” about all that? According to The Marshfield News-Herald:

Some people have said they were traumatized after reading the book, according to Carney, who cited online reviews as evidence.

“I just have concerns that it’s too graphic, even though these are Muppets characters,” Carney said. “Unfortunately in this world there is a lot of war and strife and poverty; I understand that. I just don’t know how appropriate that is to be teaching that to 5-year-olds.”

“I believe young children should see the world for what it truly is—beautiful, good and hopeful—and their innocence remain intact for as long as possible.”

Yeah – never mind the 5-year-olds who are actually living in that poverty. God forbid we have our 5-year-olds exposed to that! What would happen if they knew that existed?! Also, if you want children to see the world for what it “truly” is, you can’t blot out the parts you don’t like or that make you uncomfortable. Especially when they affect other children just like your own.

This worldview (or lack of one) of Carney’s seems to extend beyond the Muppets. Back in July, when the curriculum was first being discussed, Carney brought up similar objections to other aspects of the new curriculum that were focused on horrors like helping kids become better global citizens. Again, from the News-Herald, she said:

The focus is away from … American exceptionalism and being proud to be an American, and the focus is instead on being kind of a citizen of the world, and we can no longer just be isolated, or ethnocentric. I think it’s a philosophical shift.

Yes. Yes it is. It is a philosophical shift, and it’s one that needs to be made. Believe it or not, you can appreciate your own country and still acknowledge that there’s a larger world we’re all a part of.

The thing is, the new curriculum also includes stuff like learning about the American flag, the branches of government, the principles upon which the country was founded, and what freedom means. There’ll be all sorts of opportunities for flag-waving and talking about the good parts of the U.S. anyway.

Thankfully, the school board voted 4-1 to approve the new curriculum, and no one else has raised complaints about the book. Because that would be ridiculous.