Astronomers May Have Found Most Populous Exoplanet System 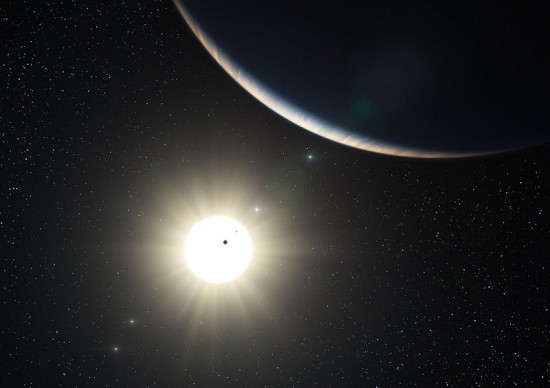 In 2010, astronomers announced that they’d discovered at least five — or as many as seven — exoplanets orbiting the sunlike star HD 10180 in the constellation Hydrus. Now, a new analysis of that data suggests that there are least seven planets, but as many as nine orbiting the distant star. If true, this would make the HD 10180 the most populous exoplanet system yet discovered.

Though our own solar system boasts eight planets, since Pluto’s demotion to a dwarf planet, we’ve yet to discover another system that can beat our own for planetary denizens. This new research by Mikko Tuomi, which is slated for publication in Astronomy and Astrophysics, could change that. Using existing data from the HARPS spectrograph, Tuomi applied new analytical techniques that confirmed the existence of two possible planets in the system and suggest two more.

In order to guess at what planets orbit distant stars, astronomers observe the light “wobble” of stars caused by the gravity of orbiting planets. This allows scientists to make accurate guesses about the number and size of planets in a given system. For instance, HD 10180 has five planets with masses about the same as Neptune and one about the size of Saturn — in this case, about 64 times more massive than the Earth.

The three additional planets suggested by Tuomi’s findings point to masses about 1.3, 1.9, and 5.1 times the mass of Earth, respectively.

Scientists can also use the “wobble” to determine the time it takes a planet to complete an orbit around its star. In the case of the earlier HD 10180 planets, these ranged from between five and over 2,000 days. The new planets appear to have very small, fast orbits — one as little as 1.2 days. This suggests that although they are approximately Earth-sized that, like Mercury, they are extremely close to their sun.

Actual confirmation of nine planets around HD 10180 will take further studies confirming Tuomi’s findings. Spotting planets around stars 127 lightyears from Earth is a tricky business, after all. However, Tuomi’s research offers strong evidence of a busy neighborhood around the star.

(via Physorg, image via Wikipedia)