.@KellyannePolls says that 2 Iraqi refugees “were the masterminds behind the Bowling Green massacre.”
(There was no such massacre.) pic.twitter.com/sD3Nnb5xfE

If you’re thinking, “This time, they have to admit this is complete nonsense,” I’d like to direct your attention to the veritable mountain of nonsense that has been doubled down on before this. Kellyanne Conway showed up on the news last night with some particularly alternative facts: that the not-a-Muslim-ban-Muslim-ban is justified by the “Bowling Green Massacre”—an event that does not exist.

As such, it’s … hard to know what to call it. Given context clues, it seems Conway was fabricating a terrorist attack. In 2011, two refugees from Iraq, living in Bowling Green, Kentucky, were found to have “attempted to send weapons and money to al Qaeda in Iraq,” according to the Justice Department. They didn’t succeed due to an undercover investigation (and weren’t found to have been planning any attack on U.S. soil), but the incident caused the Obama administration to look at how the perpetrators got through the refugee screening process, fix the security hole, and double check their work.

Conway was attempting to liken this to Trump’s travel ban (as the “both sides do it” strategy goes), although, while this action caused problems for people from Iraq on their way to the United States, the Obama administration’s actions weren’t a ban and were very different at anything deeper than a cursory glance. The idea that the Obama administration’s actions justify Trump’s is facile at best, and the story got plenty of coverage, despite Conway’s insinuation that the media is disproportionately covering Trump’s ban. If she’s upset that the media isn’t drawing the comparison enough now, that’s because it’s a bad comparison. That would be biased, disingenuous media coverage.

In tweets this morning, Conway appeared to attempt to correct herself, sharing an ABC article about the Bowling Green arrests,  wanting to be patted on the back for not outing someone who did not run a fake story after doing due diligence, and asserting that the reporter who stirred up the Martin Luther King Jr. bust story was also let off the hook. That’s kind of bizarre, considering that, while Conway specifically may not have called out the MLK bust mistake, Trump himself called out the reporter by name after the mistake had been admitted, and Press Secretary Sean Spicer brought it up again during a press briefing.

Sure, we all misspeak sometimes, but the Trump team was already on thin ice in trying to use the Obama administration’s actions as precedent. Taking that ridiculous comparison one step further in falsely portraying an event that never even became an event as a “massacre” is absolutely worthy of being pointed out, especially when it comes directly from the counselor to the president—especially when her response is “everyone makes mistakes” and glosses over “I made a mistake.”

Meanwhile, Twitter is mocking the made-up attack mercilessly, as it does:

Here are all the names of the people that perished in the Bowling Green Massacre. May they Rest In Peace pic.twitter.com/vB3k6vNz2y

Finding these Bowling Green Massacre jokes to be a little too soon. Out of respect, we should wait until it takes place.

And Conway is continuing to spread “alternative facts,” as she does (the article she linked proves her false):

This is not accurate. Obama nominated a woman named Avril Haines to be Deputy Director of the CIA. https://t.co/IZfCb70HJI 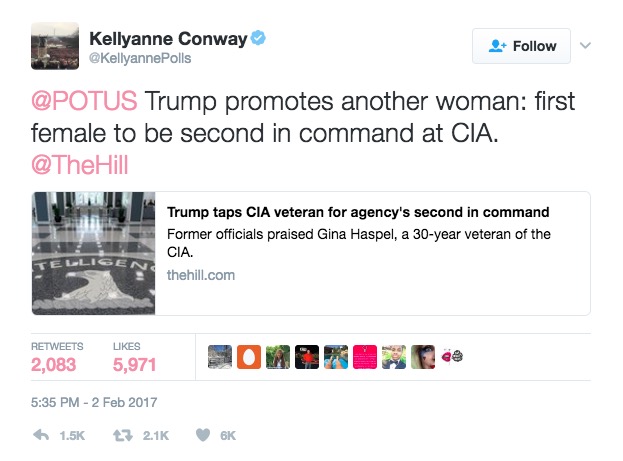 I don’t notice team Trump talking at all about the actual violence perpetrated against Muslims in a Canadian Mosque by a Trump supporter.