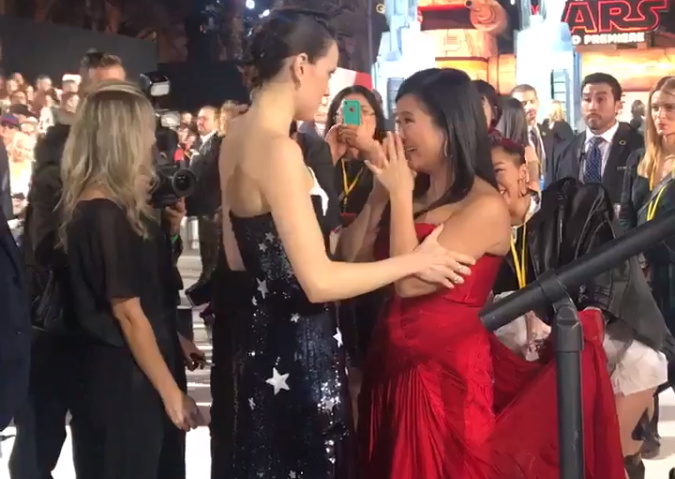 At last night’s Star Wars: The Last Jedi premiere in Los Angeles, Kelly Marie Tran couldn’t help crying tears of joy as she took in where she was. The child of Vietnamese refugees, she’s spoken many times about how she wanted to live the life her parents didn’t get to. “They had given up so much so that I could live at the level that so many people are just automatically born into,” she told Buzzfeed back in November. “Now I have this [life], and it’s purely because my parents dropped everything and moved to a country where they didn’t know the language [and] didn’t have any opportunities.”

Speaking with The Star Wars Show‘s Andi Gutierrez the night of the premiere, Tran became understandably emotional as she was introduced as Rose Tico.

“That’s a completely unreasonable request,” Gutierrez said. “I would be losing it right now if I were you.”

As she made her way down the red carpet, she stopped to thank producer Ram Bergman for the life-changing opportunity.

And later, Daisy Ridley – who probably understands better than anyone what it’s like to be catapulted into the Star Wars spotlight – comforted Tran with a big hug.

I feel strange posting a private moment, like this. But this level of emotion, met with this level of support, is @StarWars encapsulated. pic.twitter.com/lYd1bCcr1V

Tran has repeatedly spoken about her parents’ struggles as refugees from Vietnam, and how she felt that she had to honor their sacrifices by doing what she loved. “My parents are both refugees from Vietnam, and they spent their whole lives working towards a reality where my sisters and I would have choice,” she told the New York Daily News. “That was purely it. My parents never had the luxury of having a dream.”

“I remember thinking I was living for multiple generations,” she continued, “and if I wasn’t pursuing something that made me happy, if I wasn’t really living to my fullest, then I wouldn’t really be doing them justice.”

When we say that representation matters, we’re often talking about the effects that movies have on their viewers. It’s important for children to see themselves reflected as heroes in our stories. But representation also creates opportunities for actors like Tran, who might otherwise find themselves forever in secondary or stereotyped roles, instead of living their dreams on the red carpet.

(Via SYFY Wire; image via screengrab)