Kelly Marie Tran, Too Pure for This World, Wore A Custom “What Would John Boyega Do?” Sweatshirt to Star Wars Celebration 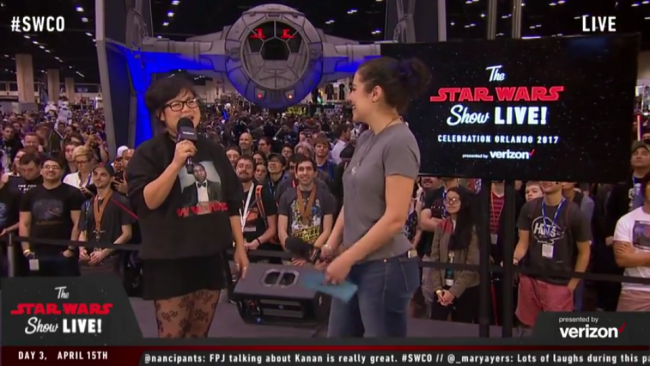 (I promise I will bring you non-Star Wars news today, but I am as helpless as any mortal before the might of the Disney Corporation’s marketing machine.)

Kelly Marie Tran, who will play Resistance mechanic Rose in Star Wars: The Last Jedi, is clearly having a blast at her first Star Wars Celebration as a cast member – and she took her “costume” to the next level. Tran ordered a custom-made sweatshirt that reads WWJBD – “What Would John Boyega Do?” – and wore it at Star Wars Live.

The best hand-made shirt at @SW_Celebration award goes to Kelly Marie Tran with her “What Would @JohnBoyega Do?” sweater. TOO DELIGHTFUL! pic.twitter.com/XC9Mk1IrHV

(You can watch Tran talk about the sweatshirt in the below video starting at 2:06:00)

“I have to tell you something,” she said to the crowd. “This sweater – I actually got it made by myself. Like, I went online and paid to get it made. And I’ve been telling John about it, and he doesn’t believe me. I’ve been sporting this, I went to Galactic Nights last night, I’ve been wearing it everywhere. So if you could do me a favor and take a photo and tweet this at him, and freak him out…”

Asked about the WWJBD slogan, she said, “That’s my new motto. Isn’t that everyone else’s motto?”

The love is clearly mutual. Boyega previously said that Tran would be the “new lead” and real star of The Last Jedi, and in a Cannes interview with Vulture last year, he said, “I love her. I love her. I think she’s fantastic…She’s great. She’s freaking great, and I love her. I freaking love her. She’s fantastic. Seriously. She’s changed a lot in terms of perspective on just chemistry and industry. She’s a real cool girl.”

He continued, “It’s a friendship thing in the sense of you meet someone and you’re just like, ‘I vibe with you. I feel like I’ve known you for years.’ And that’s a very, very good thing.”

At this year’s Star Wars Celebration, Tran also shared stories from her previous Celebration, in London, when no one knew who she was. At the time, she knew she would be The Last Jedi, but the other attendees did not. “I had such a good time,” she said. “I took photos with a bunch of people – so many people that didn’t want to take photos with me, which was the best. I was that annoying person that was like, ‘Please take a photo with me!'”

While many of our readers are obviously still shipping Finn/Poe, this has me curious if Boyega and Tran’s onscreen characters will be as delighted with one another – romantically or platonically – as they are in real life. Either way, I’m glad that these two Star Wars leads seem to be having such a ball working together.