Something everyone from Zoomers to Boomers can agree on. 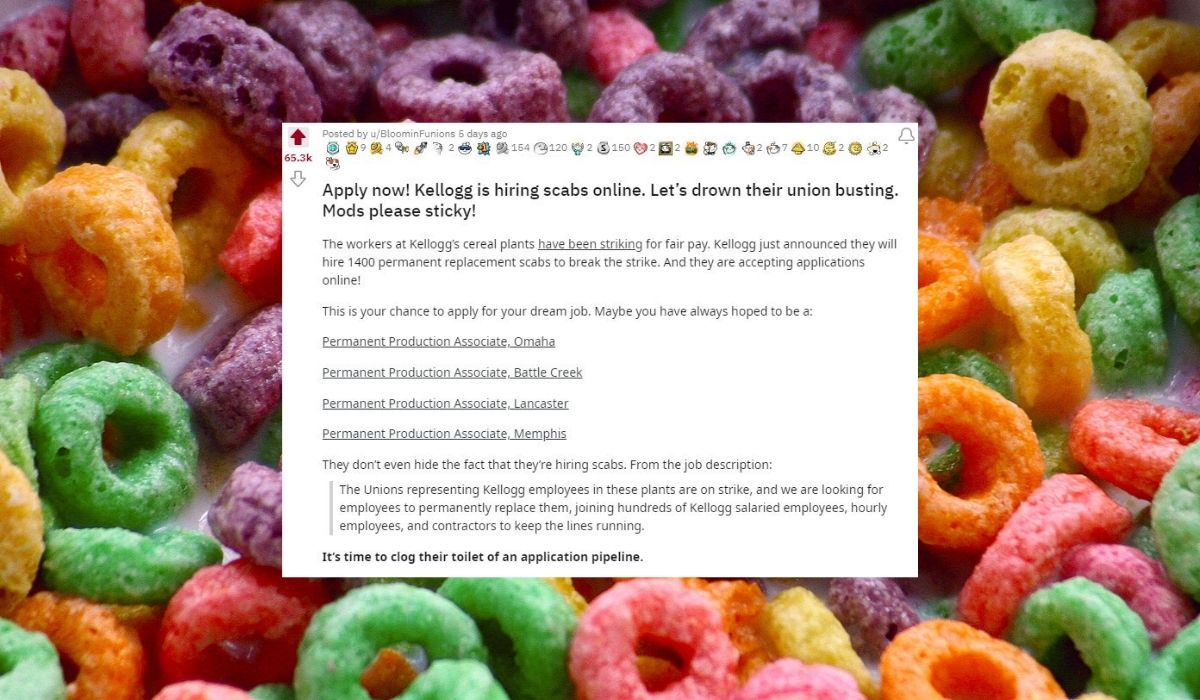 Motivated by stagnating wages, CEO Steven Cahillane making $11 million in 2020, and reported 16-hour workdays with 7-day workweeks, Kellogg’s factory workers in four states began striking on October 5—yes, the same people who feed the country and world struggle to feed their families. After weeks of negotiations, the best Kellogg’s offered was a 5-year contract that gave a 3% raise for longtime employees and less than pennies for everyone else.

With the union voting “no,” Kellogg’s announced they’ll move forward on permanent replacements for 1400+ striking workers. Labor organizers and high-profile people all the way up to President Biden have called out Kellogg’s corporate greed.

Striking Kellogg’s workers in four states have overwhelmingly rejected a tentative agreement, and voted to continue the strike. They’ve been out since October 5th, and are still standing strong! https://t.co/hSnctJtyKb

Last week we hit up the Kellogg’s strike in Omaha and heard some stories from the workers holding it down outside the plant. I think unions r neat! Bosses eat rocks! pic.twitter.com/nJMpqsG3rU

BREAKING: President Biden condemns Kellogg’s plans to permanently replace striking workers, calling it an “an existential attack on the union and its members’ jobs and livelihoods.” pic.twitter.com/yCqqQ5bD0Z

NO PRESIDENT has done this before—BIden condemns Kellogg’s use of permanent replacements: “I am deeply troubled by K’s plans to permanently replace striking workers. Permanently replacing strikers is an existential attack on the union & its members’ jobs”https://t.co/W0SeRPu2G5 pic.twitter.com/ZKwXEaJ4te

Last week, a viral post on the r/antiwork subreddit called for collective action and solidarity with the strikers. The original poster, and others, asked people to flood Kellogg’s hiring efforts with fake applications. The activity on this subreddit drew more eyes because of screenshots (that also went viral) on Twitter and Reddit’s Recap of 2021 releasing the day before, calling r/antiwork “the poster child for the great resignation.”

After blowing up on Twitter, the news reached TikTok. This is especially dangerous (for Kellogg’s) as TikTokers (and the K-pop armies) are the same crowds who signed up en masse to Trump’s failed rally in Tusla, Oklahoma, in 2020. While this was a prank, it also showed that young people were more than ready to use the platform to organize against greed and white supremacy.

One user (probably of many) quickly put together software that streamlined the fake application process to basically a click of a button.

About 30% of Redditors and 65% of TikTokers are under 29 (a.k.a. Gen Z and the youngest few millennials) and have either experienced firsthand the devastating state of our current labor market or have seen others (like parents or older siblings) struggle in an unfair system. They’re eager to make noise and disrupt with a sense of urgency, with a future looking bleaker and bleaker—in this case, to the benefit of Kellogg’s strikers and their communities.