Donald threw a party and nobody came. 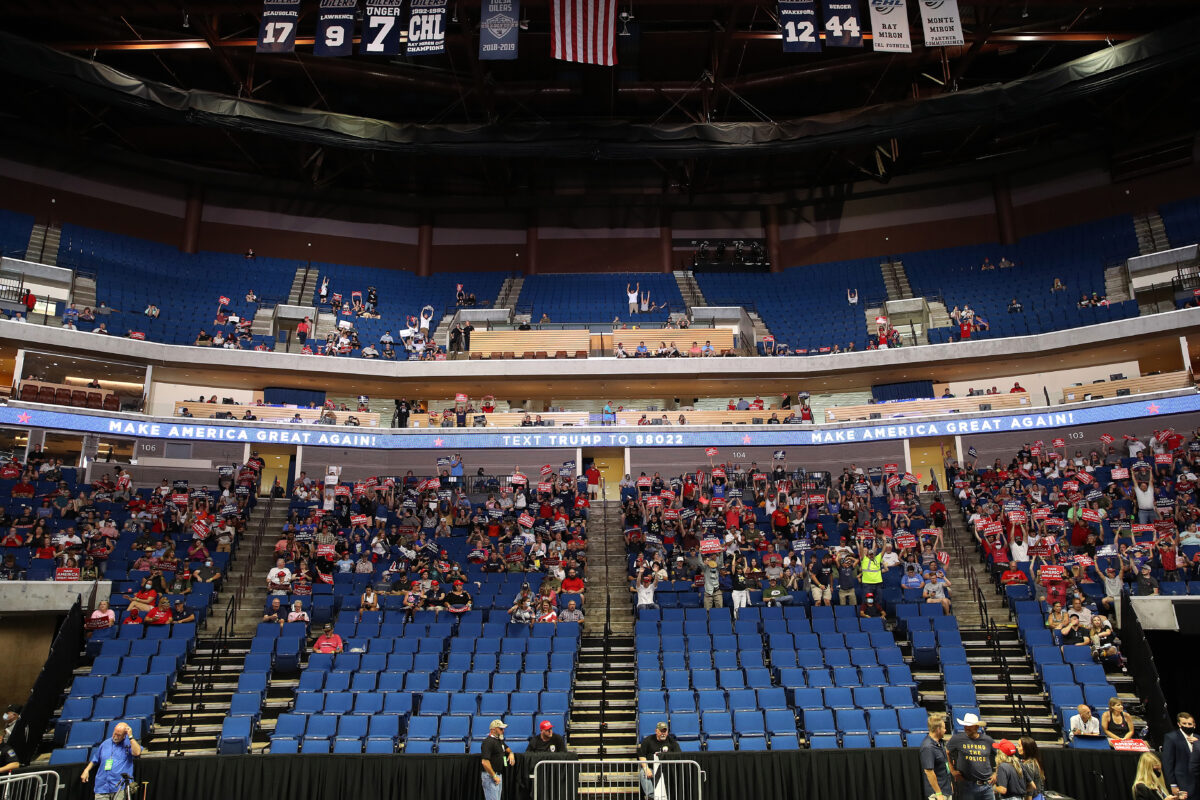 Last night, all eyes were on Tulsa as Donald Trump held his first big rally since the COVID-19 pandemic. For weeks, his campaign manager Brad Parscale has bragged on social media that the event had over 1 million ticket requests (despite the venue capacity of only 19,199). Team Trump was so convinced the event would be a blowout, that they built an entire outdoor stage set-up for Trump to speak to the overflow of people.

Over 1M ticket requests for the @realDonaldTrump #MAGA Rally in Tulsa on Saturday.

Before entering each guest will get:

There will be precautions for the heat and bottled water as well.

But then, in a humiliating turn of events, only a couple thousand people showed up. News cameras panned around an arena with empty balconies, and a floor thinned out with die-hard supporters. As the rally began, security people began hastily taking down the outdoor stage.

As others are reporting, looks like attendance here in Tulsa is well below campaign's expectations. Here's the main floor at the arena currently pic.twitter.com/EASfSHL5nN

So what happened? There are several factors to explain the low turnout: fears of COVID-19 and dismal polling numbers definitely played a part. But as the rally unfolded, a combination of K-pop fans and teens on TikTok revealed that they had registered for hundreds of thousands of tickets to inflate the numbers and troll Trump.

YOU.LOVE.TO.SEE.IT. Generation Z, you hit Trump where it hurts, right in his overinflated ego. YouTuber Elijah Daniel told the New York Times, “It spread mostly through Alt TikTok — we kept it on the quiet side where people do pranks and a lot of activism, … K-pop Twitter and Alt TikTok have a good alliance where they spread information amongst each other very quickly. They all know the algorithms and how they can boost videos to get where they want.”

In the end, only a dismal 6,200 were estimated to have shown up. And the folks who did were treated to a ten minute explanation of RampGate, and whatever jumbled word salad Trump sputtered out. Many fans looked bored and zoned out throughout the event.

Parscale tried to spin the pathetic rally turnout by claiming that protesters kept Trump supporters out of the arena, which is a lie.

KPop allies, we see and appreciate your contributions in the fight for justice too 😌

The truth is that Team Trump got trolled by an army of Gen Z badasses running circles around Trump’s incompetent campaign. And that’s a beautiful thing to see. The Tulsa rally, which was meant to kick off Trump’s re-election campaign, was an utter failure.

This is what happened tonight. I’m dead serious when I say this. The teens of America have struck a savage blow against @realDonaldTrump. All across America teens ordered tickets to this event. The fools on the campaign bragged about a million tickets. lol. @ProjectLincoln.

The schadenfreude runs deep, and no we can’t resist mocking Trump for being, well, Trump. But I also felt so much hope watching this rally unfold. After weeks of protests against police brutality, we’ve seen hundreds of thousands of people across the globe marching to demand racial equality. We are legion. Trump and his broken deplorables are not.

While Trump and his vile sycophants may take up all the headlines and the media coverage, they’re not the majority. There are more of us than there are of them. And that’s a beautiful thing.