"Some of her favorite pastimes are murdering people with her spear and meditating." <3 <3 <3 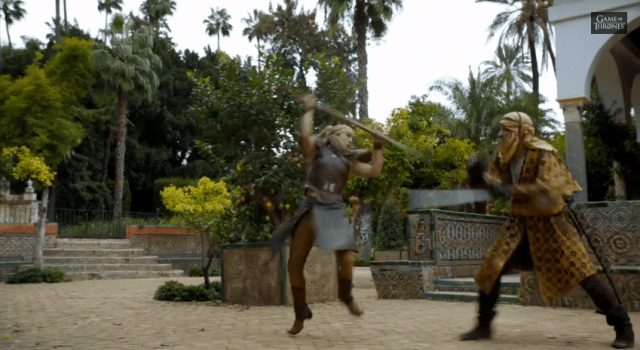 We here at The Mary Sue are anxiously awaiting the arrival of George R.R. Martin’s “Sand Snakes” to Season 5 of HBO’s Game of Thrones. They’re super-interesting warriors and while we know they’ve had to make a few changes for the show, we’re hopeful (boob armor and all) they’ll be awesome on screen. One of them, New Zealand actress Keisha Castle-Hughes, got to talking about them recently and had great things to say.

Speaking with Stuff.co.nz, Castle-Hughes said she’s very excited to be working on the show as it’s one of her favorites, and that she found out she was cast as Oberyn Martell’s daughter while watching “The Mountain and the Viper.”

“I actually found out I had the part as his daughter on the night that the episode aired, so I had like a very intense reaction [Editor’s Note: Much like the rest of the world.] like emotional reaction to that scene,” Castle-Hughes told them. And gave these spoiler-free details on her character this season and what she thinks it means for the show overall:

Obara Sand, she’s like a fierce, she likes to think of herself as a warrior monk. Some of her favorite pastimes are murdering people with her spear and meditating and picking on her younger sisters… I think people are going to be really blown away by the Sand Snakes, there’s three of us. So we’re his, Oberyn’s, daughters. There’s eight of us in total but they’re showcasing three characters, Obara, Nymeria, and Tyene. It will be very exciting to see women in Game of Thrones who work together because we haven’t seen that yet. We’ve seen strong women but they’re always either lone wolves like Arya Stark or Brienne of Tarth, or they’re political leaders like Cersei Lannister or Daenerys. And so we meet these three women who are warriors, who work together, and who have nothing to lose which is very dangerous.

Ok yes that’s all well and good but more about that spear please.

It’s been very intensive, my character wields a 7-foot spear, the same as her father, so I’ve had lots of martial art training in the martial art of Wushu which has been really interesting and different for me, I’m more of a dramatic actress and I’ve never really done a lot physical or stunt-based roles before . It’s been a massive challenge but it’s been so much fun.

Meanwhile, HBO is set to air a half hour special for the new season on February 8, at 7:30 p.m. which, according to Entertainment Weekly:

The special is titled Game of Thrones: A Day in the Life. It’s a half-hour documentary that covers one day of season 5 production on three different Thrones sets in three different countries – Belfast, Northern Ireland; Dubrovnik, Croatia; Sevilla and Osuna, Spain. The special follows key crew members and promises to highlight “the epic sets, renowned cast and global scale of Thrones, as well as the more intimate and individual challenges of our subjects, giving the audience a new perspective on one of the most elaborate productions in television history.”

Here’s a little teaser for it.