Update on the Fight Against Brett Kavanaugh | The Mary Sue 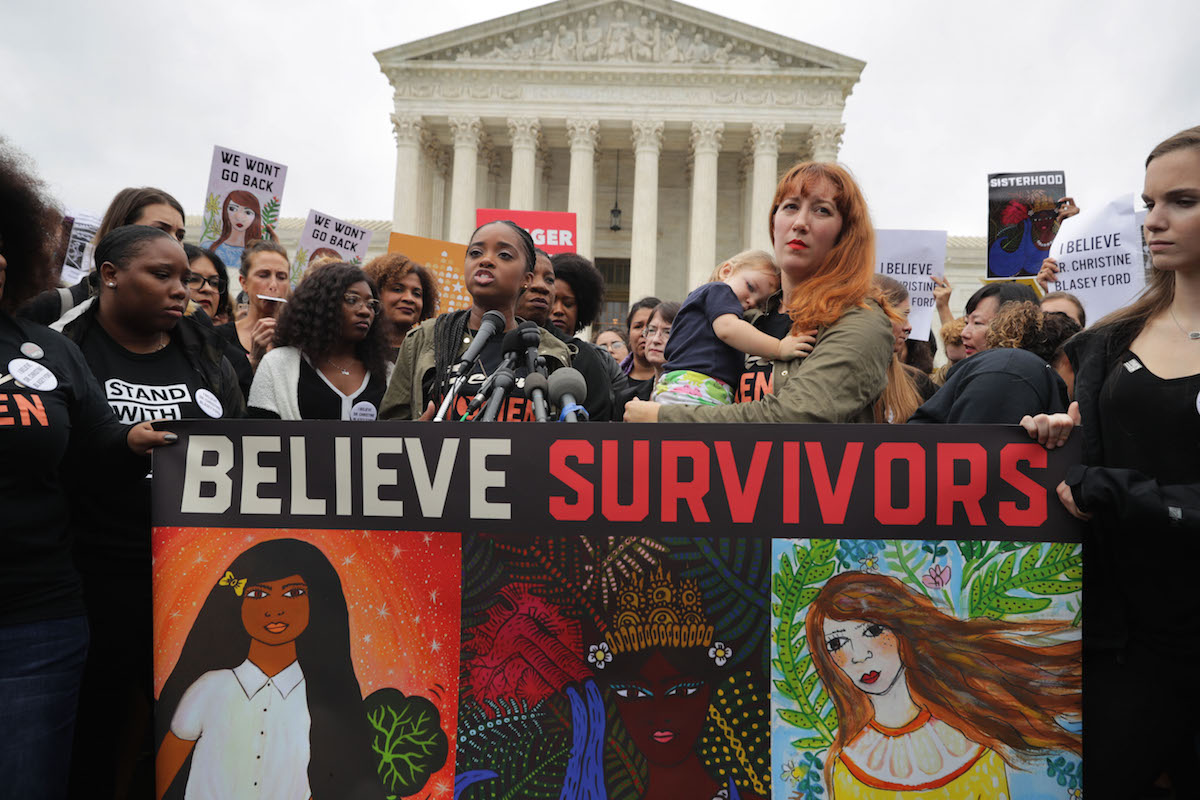 Last week, the fight to get Republican senators to take seriously the sexual assault allegations against Brett Kavanaugh felt to be at full throttle. Chuck Grassley, the head of the Senate Judiciary Committee, seemed to be sticking to the extremely narrow window they set without consulting Dr. Christine Blasey Ford as to when they would accept testimony from her.

Mitch McConnell came right out and said the Republicans’ minds were made up regarding Kavanaugh’s confirmation, testimony be damned. And Donald Trump’s flippant, nasty tweets inspired survivors of sexual assault to speak out on Twitter, sharing the reasons why they didn’t report their experiences.

Because our nonstop political hellscape doesn’t take breaks for weekends, the fight only continued over the weekend. Here’s where we’re at now. (Content warning for sexual assault throughout.)

Dr. Ford has agreed to testify and is scheduled to appear in front of the committee on Thursday. Originally, the committee planned to have Kavanaugh and Ford at the same table during each other’s testimonies. Under the new terms of their agreement, Kavanaugh will not be in the room while Ford is speaking or being questioned.

As for Kavanaugh, he claims to have found calendars from the summer Ford says he attacked her, which don’t show him at the party she describes. Because it’s a totally normal thing to keep your calendars from high school, and to trust that they thoroughly documented every party attended by a teenage boy who was known to brag about his heavy drinking habits.

Not going to a party this weekend. Just gonna stay home. Now to mark it in my calendar and place it in a time capsule for 35 years pic.twitter.com/diu41rFk68

And this from the man who had trouble providing documentation or recalling details of important events during the first week of his hearing.

Weird that he didn’t have a calendar to help him recall whether he had a meeting about the Mueller investigation with someone from Marc Kasowitz’s law firm earlier this year but sure this seems legit https://t.co/Nytvat6P2J

My brother just asked how it is that 93% of Kavanaugh’s judicial records can’t be found but he has no problem locating his teenage alibi calendar. 🤔

Over the weekend, a second woman, Deborah Ramirez, came out with additional allegations against Kavanaugh. Ronan Farrow and Jane Mayer of The New Yorker report, “Kavanaugh had exposed himself at a drunken dormitory party, thrust his penis in her face, and caused her to touch it without her consent as she pushed him away.

Ramirez is now calling for the F.B.I. to investigate Kavanaugh’s role in the incident. “I would think an F.B.I. investigation would be warranted,’ she said.” One classmate from Kavanaugh’s social circle described him as being “aggressive and even belligerent” when drunk. Kavanaugh denied the event ever took place.

Now, a third woman (and also possibly a fourth?) is preparing to come forward with more allegations, according to attorney Michael Avenatti.

I represent a woman with credible information regarding Judge Kavanaugh and Mark Judge. We will be demanding the opportunity to present testimony to the committee and will likewise be demanding that Judge and others be subpoenaed to testify. The nomination must be withdrawn.

Warning: My client re Kavanaugh has previously done work within the State Dept, U.S. Mint, & DOJ. She has been granted multiple security clearances in the past including Public Trust & Secret. The GOP and others better be very careful in trying to suggest that she is not credible

Brett Kavanaugh must also be asked about this entry in his yearbook: “FFFFFFFourth of July.” We believe that this stands for: Find them, French them, Feel them, Finger them, F*ck them, Forget them. As well as the term “Devil’s Triangle.” Perhaps Sen. Grassley can ask him. #Basta

Finally, there was another sort of allegation made against Kavanaugh as well, one that’s ostensibly milder but still disturbing. According to an article in The Guardian, a top professor at Yale Law School, who is also a vocal defender of Kavanaugh, told a group of students that it’s “not an accident” that all of Kavanaugh’s female clerks “looked like models.” The professor, Amy Chua, called Kavanaugh a “mentor to women,” and indeed, the majority of his law clerks were women. (Women also make up the majority of law students nationwide, so good on him for doing the bare minimum.)

“Yale provided Kavanaugh with many of the judge’s clerks over the years, and Chua played an outsized role in vetting the clerks who worked for him. But the process made some students deeply uncomfortable,” the article states. “One source said that in at least one case, a law student was so put off by Chua’s advice about how she needed to look, and its implications, that she decided not to pursue a clerkship with Kavanaugh, a powerful member of the judiciary who had a formal role in vetting clerks who served in the US supreme court.”

The article makes sure to clarify that these women weren’t unqualified. But it speaks to a depressing lesson most women and girls are taught early in life: Our appearance is seen by many to be a valid part of our resume. Girls as young as seven report feeling judged on their looks and some studies have linked physical attractiveness in women to higher salaries. For Kavanaugh to engage in appearance-based gender discrimination–even if it is unconscious–should definitely be taken into consideration when assessing his place on the Supreme Court.

In addition to today’s national walkout, protestors have been gathering outside the committee hearing room, as well as at the offices of senators across the country.

LIVE: Video of protesters getting arrested, after taking over the Russell rotunda in the Senate building to protest Kavanaugh. They are chanting “We believe the women!” #BelieveSurvivors pic.twitter.com/gr2i29UmRK

Heroic students from @BowdoinCollege and activists from @mfalpac putting their bodies on the line outside of @SenatorCollins office. We are so grateful for their fight. #StopKavanaugh #BelieveSurvivors #BeAHero pic.twitter.com/LkxDkqNLoG

The entire hallway is in tears. We are at a moment in history where women have to repeat their trauma to the masses to literally beg Senators to vote with moral clarity. #StopKavanaugh #BelieveSurvivors #BeAHero pic.twitter.com/Ky26a9fPTf

“Today is an occasion & opportunity to show that we stand with survivors of sexual assault & have their back against the attempts to shame them or stigmatize them. We must make sure they are treated with respect & have an opportunity to be heard.” #BelieveSurvivors pic.twitter.com/bazEaLVmUj