There are many reasons #WhyIDidntReport. 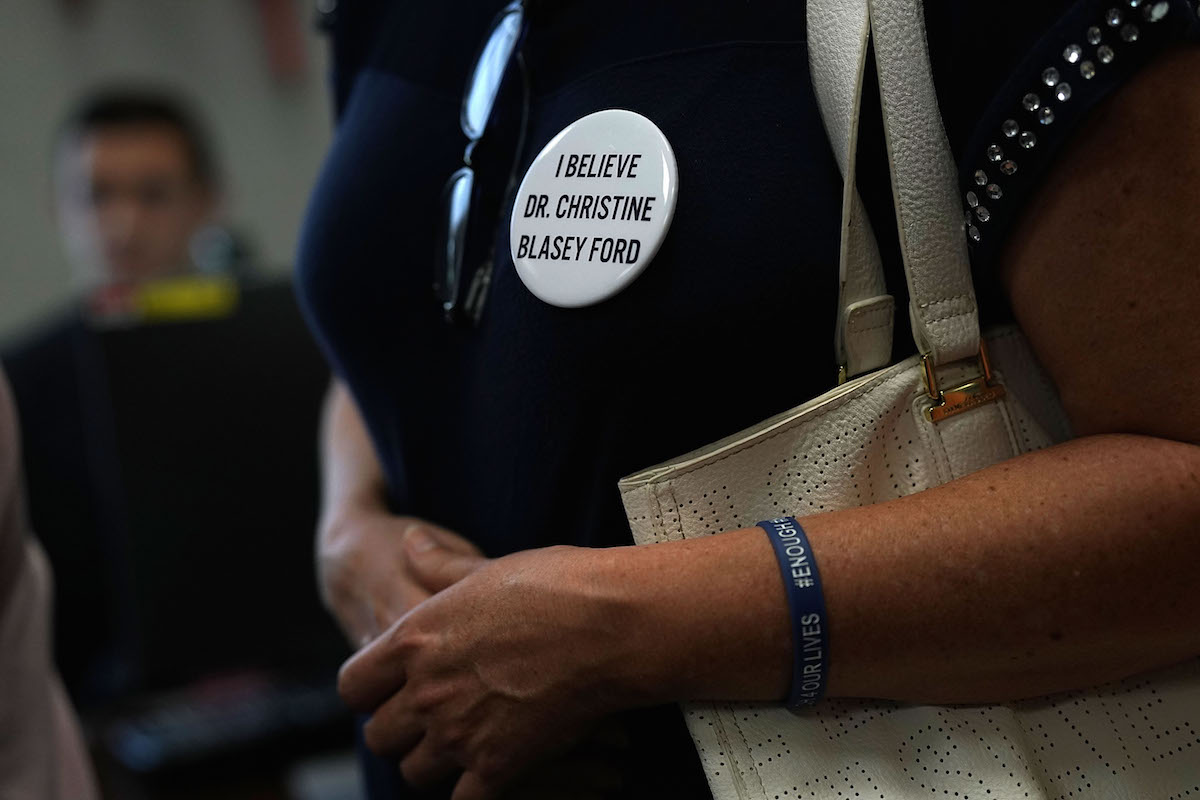 Word out of the White House was that Donald Trump had “shocked” those around him with his “respectful” comments regarding Dr. Christine Blasey Ford, the woman who has accused Brett Kavanaugh of attempting to rape her in the 1980s. (Just another unnecessary reminder that the president is a man whose display of basic human decency is seen as “shocking.”) He had tweeted that he hoped she would testify in front the Senate Committee, and he’d defended Kavanaugh, saying he “doesn’t deserve” to face these accusations, but he hadn’t actually attacked Ford directly. And that was shocking to many.

It also didn’t last long. Friday morning, Trump tweeted out the following: “I have no doubt that, if the attack on Dr. Ford was as bad as she says, charges would have been immediately filed with local Law Enforcement Authorities by either her or her loving parents. I ask that she bring those filings forward so that we can learn date, time, and place!”

I have to admit, I stared at that tweet, sighing defeatedly for about 20 minutes, not even knowing where to start breaking it down. We talk about this so much and so often, how hard it is for a victim of sexual assault to come forward either immediately or decades later. How an experience like the one Dr. Ford went through (and if you haven’t read her full account of what happened, do so) can manifest as a trauma that isn’t easily spoken about or shaken off. That a rich, powerful, privileged man can think it’s as easy as following steps–steps laid out by institutions long dominated by men–and then justice will fall into place, isn’t surprising but it is incredibly depressing.

His words also show that we still think of the survivor of an assault as bearing a heavier load of that burden than the perpetrator.

Thousands of Twitter users spoke out today using the hashtag #WhyIDidntReport. Normally, this is where I would embed tweets, but the stories are being shared are so personal, even though they’re public on Twitter, I’m going to leave them there and just encourage everyone to scroll through the hashtag. There are stories from people who did speak up and were ignored, who heard of others who shared an attacker who had previously been ignored and therefore didn’t feel safe coming forward, whose attacker was a boss or a babysitter or in some insurmountable position of power, or who didn’t want to risk their job, their reputation, or their mental health.

Here are a few of the less personal, but still impactful, tweets:

According to National Sexual Assault hotline out of 1000 rapes, 310 are reported to police. 6 of those lead to jail time. These are the stats for the US. Most countries haven’t documented them. #WhyIDidntReport pic.twitter.com/ZxFMRavSGJ

Reminder: Every single person posting #WhyIDidntReport is reliving their trauma to try and teach folks to extend long overdue empathy and protection. The folks posting are only a drop in the bucket – so many people aren’t (and may never be) ready to relive that trauma.

#WhyIDidntReport: Almost 50% of trans people will experience sexual violence in their lifetime. Despite the numbers, with the amount of transphobia in our country, it’s no wonder trans survivors don’t feel safe reporting. pic.twitter.com/Y3mO2mKbKs

For men wondering why women are trending #WhyIDidntReport rape & sexual assault—maybe take a moment to open your eyes & understand the horrific world men have created.

Men—we need to change this. pic.twitter.com/BCUkIZAGcM

In addition to the tweets, there has been some incredible reporting on this issue this week, even before Trump tweeted his ignorance. On Medium, Jessica Valenti wrote about the statistics and studies that illustrate why women don’t come forward, and how that “isn’t just data: it’s a map to understanding how abusers are able to flourish.” This part in particular stuck out for me: “Knee-jerk sympathy for men accused of wrongdoing — something feminist philosopher Kate Manne dubs “himpathy” — isn’t new. For decades, studies have shown that men are less likely than women to believe a woman when she says she was raped and are more likely than women to hold negative views of rape victims.” Women know they will be doubted, challenged, and vilified. Men know the world will be on their side. Yet we still ask why women don’t come forward.

This week, the NYT’s brilliant and informative podcast The Daily put out an episode with a woman, Caitlin Flanagan, sharing a story that is very similar to Dr. Ford’s. It’s a short episode but it illuminates so much–how the “boys will be boys” sentiment is damaging to both boys and girls, and how boys are taught (or at least allowed) to use girls as learning experiences. Mostly, it is one woman speaking firsthand about why she didn’t tell anyone, even her loving parents, about the boy who held her down and tried to rape her.

(If you’re more a reader than a listener, Flanagan also published a version of the story in The Atlantic this week, and Vulture has a great breakdown of the episode.)

I get that for many, there is a genuine lack of understanding when it comes to why a woman–or in Ford’s case and too many others, a girl–might not come forward, no matter how smart or strong she is, no matter how loving her parents. For those people, think of all of the above tweets and articles as resources, if you really do want to understand what keeps victims from coming forward.

But there are many more who don’t approach the question with good faith, who are simply trying to make a smug political point and have no actual concern for the women themselves. Those people, including Trump, can fuck right off. They are the reason why we have to say “believe women,” because the standard default for those in power has, for so long, been, “don’t believe women, and no matter what they say, find a way to justify your belief that they’re lying.”

That’s what we saw this week from Megyn Kelly, who called Dr. Ford a “major Democratic donor” (which she’s not). We saw it from prominent conservative legal operative (and friend of Kavanaugh) Ed Whelan, who constructed a “stunningly irresponsible” theory about mistaken identity that he had to apologize for. We’ve seen it from Mitch McConnell, Chuck Grassley, and every other Republican politician who has insisted Brett Kavanaugh will be confirmed no matter what, as if their job is to confirm him and not to determine whether or not he is worthy of confirmation.

Those people are the reason why survivors of sexual assault don’t come forward. And they still have the nerve to say they don’t understand.