Kate Mulgrew Is Not a Geocentrist | The Mary Sue

OH THANK GOD: Kate Mulgrew Is Mad About the Geocentric Documentary, Too

All you people who called her "too stupid to live" should probably apologize. 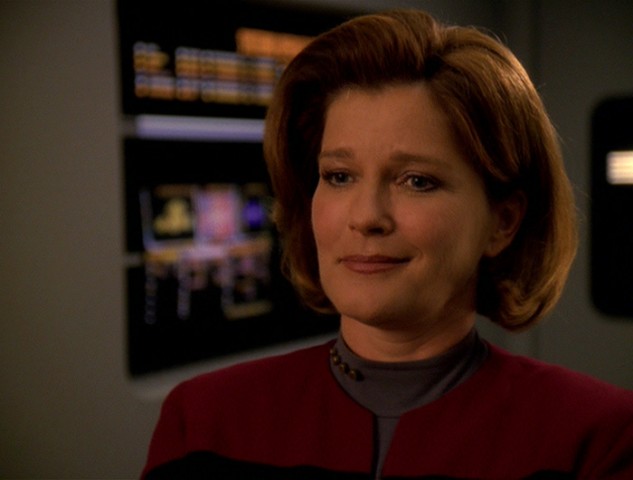 Yesterday, we ended the day on a major bummer when we learned that Kate Mulgrew, the actor best known for playing Captain Kathryn Janeway in Star Trek: Voyager, would be narrating a documentary backed by geocentrists and Holocaust deniers. Today, she’s set the record straight.

Mulgrew took to her official Facebook page about an hour ago to address growing concerns that her involvement with The Principle, a documentary about how NASA is totally trying to hide the truth that the Sun revolves around the Earth from us or whatever, in some way reflected her own views.

“I understand there has been some controversy about my participation in a documentary called THE PRINCIPLE. Let me assure everyone that I completely agree with the eminent physicist Lawrence Krauss, who was himself misrepresented in the film, and who has written a succinct rebuttal in SLATE. I am not a geocentrist, nor am I in any way a proponent of geocentrism. More importantly, I do not subscribe to anything Robert Sungenis has written regarding science and history and, had I known of his involvement, would most certainly have avoided this documentary. I was a voice for hire, and a misinformed one, at that. I apologize for any confusion that my voice on this trailer may have caused. Kate Mulgrew”

Now, you might be asking, “But Kate—you were the narrator! How did you not notice that this documentary was going to be full of terrible misinformation?” In which case, we’d like to point you to this passage of the Lawrence Krauss-penned Slate article she’s referring to, which is bafflingly entitled “I Have No Idea How I Ended Up In That Stupid Geocentrism Documentary:”

I have no recollection of being interviewed for such a film, and of course had I known of its premise I would have refused. So, either the producers used clips of me that were in the public domain, or they bought them from other production companies that I may have given some rights to distribute my interviews to, or they may have interviewed me under false pretenses, in which case I probably signed some release. I simply don’t know.

We were pretty sure that Krauss, as well as the other cosmologists and theoretical physicists featured in the trailer, were going to be misrepresented—after all, none of them seem like the type to ignore fundamental theories of modern scientific thought and understanding. But, for him to not even remember being interviewed? That takes a level of deception and subterfuge that’s beyond anything we previously suspected of Robert Sungenis and his team, for sure. Of course, they probably meticulously edited Mulgrew’s script to ensure she was none the wiser as to their geocentric leanings.

Now that we’ve cleared up this matter and our faith in Captain Janeway has been successfully restored, we intend to take a page out of Krauss’ book and “stop talking about [the film] from today on.” There’s really no point in giving such a despicably anti-semitic and backwards-thinking person such as Sungenis any more of our time and attention.