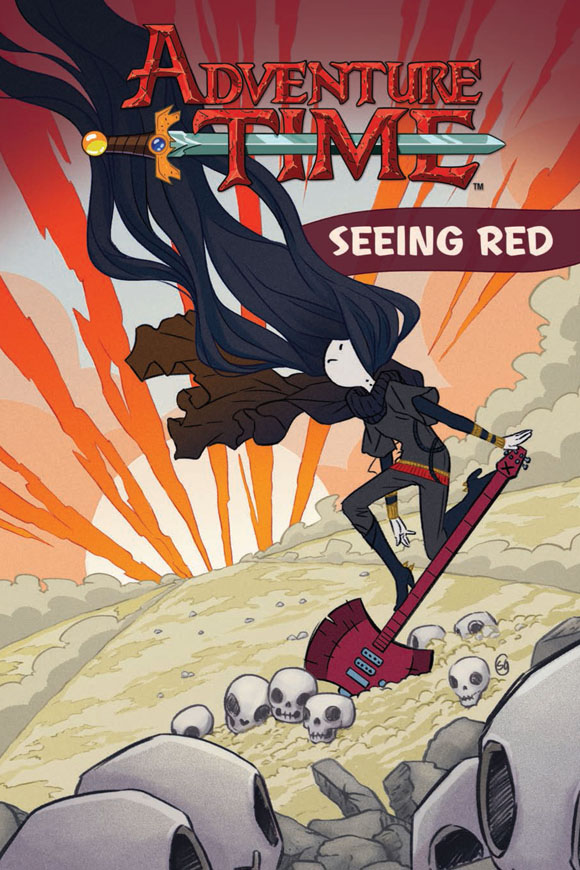 Kate Leth has become one busy woman. Not only has she stepped into the publishing sphere with work for Adventure Time and other Boom! Studios properties, she’s also been producing a set of her popular comic series Kate or Die for ComicsAlliance. That’s not all;  there’s the collaboration with high-profile podcast Welcome to Night Vale and the founding of an international group of female comic-shop workers, appropriately named The Valkyries. But given the success of the charming, highly personal, and indisputably cool Kate or Die, it’s no wonder she’s involved in so many upcoming projects. Now she’s stepped into the role of graphic novel writer and teamed up with artist Zach Sterling to produce a full-blown Adventure Time story all about everyone’s favorite rock n’ roll vampire queen, Marceline, for Boom! Studios. We had a chance to talk with her about the upcoming graphic novel, how she has no time for “hateful garbage,” and more.

The Mary Sue: How did the opportunity to do an OGN with Boom! come about?

Kate Leth: I had done some work with Boom! on previous Adventure Time projects and was asked if I’d like to write one of the graphic novels. Unexpected and very fun.

TMS: What is it like working with something that has the following and world building of Adventure Time? Is it intimidating?

Leth: I think it would be in a different franchise, but I feel very familiar with the world of Ooo! I’ve watched the show back to front, read all the comics, know a few of the creators. It can be intimidating, but I feel fairly comfortable! It’s easier to write about characters you love.

TMS: Marceline is a very popular character from Adventure Time. What about the character appeals to you, and perhaps made you want to approach the project?

Leth: Marceline is the best! She’s a punk vampire queen rock star. She’s a thousand years old. Her backstory fascinates me, and there’s so much that hasn’t been delved into. She’s tough, stubborn, definitely leaps to conclusions – but she’s also loyal, strong, and a bit of a softie. She’s volatile, but so very cool. I would have wanted to be her at 16.

TMS: Compared to the shorter form of most of your other comics work, how do you start writing something like Seeing Red? How do you prepare?

Leth: I work in outlines. I start with a pitch; that gets expanded upon, then I make a breakdown of what’s happening every 10 pages or so. Staring down 140 blank pages of story is terrifying, but 10 isn’t so bad. There’s one big arc to the whole story, but there are lots of fun, little things happening on every page. It’s a little intimidating, for sure, but I feel awesome for having accomplished that task!

TMS: Marceline’s complicated relationship with her father is well known to Adventure Time fans. What can readers expect from Seeing Red?

Leth: You can expect to see more of the struggle between them. My original draft had more of her past with the Ice King tied into her relationship with her dad, but it got a little muddy. I wanted to focus on how hard it can be to sustain a normal relationship with family as you grow, as you change. It’s hard stuff!

TMS: Marceline and Jake is not a team-up you see often without Finn. What brought about the unusual duo?

Leth: I really like male/female friendship stories. You don’t see many of them, especially with a girl in the lead! I have so many guy friends, so many great relationships with them, and you don’t see it reflected in media too often. It’s also fun to throw together to characters that, like you say, haven’t been seen together too often. Jake’s a little afraid of Marceline. She’s a bit like a cool big sister. It’s fun.

TMS: How does your experience as an artist assist in your communication with Zach Sterling?

Leth: It was helpful, I think. Having done comics, knowing how panels work, what will fit onto a page or flow together better; it all helps. Zachary is brilliant. He took my direction and ran with it so many times, making it bigger and better. I would have these very specific panel descriptions and he’d match them to the letter. On other pages I’d be vague, and he’d surprise me in the best ways.

TMS: Which character’s voice do you feel most at home writing?

Leth: Honestly, I loved writing Hunson Abadeer’s dialogue. Marceline is a lot of fun, but she’s not easy. It’s tricky to keep her from coming across as too angsty, or too angry. She has a lot of fragility. I think good dialogue from her is the most rewarding, but Hunson and Jake were just so much fun.

TMS: Kate or Die is sort of your origin point. As you move to other projects, how do you see Kate or Die moving forward? Would you perhaps be interested in other long-form, maybe creator-owned, projects? Are there projects already in the works?

Leth: Kate or Die is taking a bit of a backseat this year – I do have a lot of projects in the works! Just like everybody else, I can’t really talk about them. Trust me, though, there are a few really fun things coming your way.

I’ll still keep doing the Kate or Die strips for ComicsAlliance, but I can probably say my personal comics will be even more sporadic. I’m just so busy! If my schedule frees up, you get more comics. Give and take, haha.

TMS: Kate or Die is often an intensely personal comic. What gives you the confidence to share such intimate details with the Wild West that is the Internet?

Leth: It’s given me more of a backbone, I tell you what. I used to be terrified to post personal things, because the backlash was so instant and so fierce. Lately, I guess I’m tougher. I’m not afraid to post someone’s rude comic or just block people giving me a hard time. I’ve learned the difference between constructive criticism and hateful garbage, and I have no time for hateful garbage. My personal comics have reached an audience I didn’t expect, and the positive response is amazing. I hold onto the nice letters.

TMS: How did your arrangement with ComicsAlliance happen? Do you approach your work for them differently than you approach Kate or Die in its independent form?

Leth: ComicsAlliance is a delight. Andy Khouri, one of the editors there, approached me and asked if I’d be interested in doing biweekly strips. I was having trouble getting my own comics up on a regular schedule, so I loved the idea of having to put something out every two weeks.

My strips for them focus on geek culture, whereas my own comics are just about “whatever.” I always take into consideration what’s going on in the news, what topics are on people’s minds. With my personal work, it’s usually just spur-of-the-moment emotions getting thrown down on paper. Knowing that ComicsAlliance is a job probably makes me work a little harder – things get a bit more polish.

TMS: As some may be aware, you also recently collaborated with the creators of popular podcast series Welcome to Night Vale. Can you tell us what that was like?

Leth: That was very exciting, is what it was! I started tweeting at the show’s account shortly after I started listening to the podcast, and it turned out that Jeffrey Cranor (one of the two writers behind the show) was a fan of my comics. I ended up making some fanart, which he liked, and I got asked to design the Eternal Scout patches for their store. We collaborate now somewhat regularly. It’s really exciting. I love what they do.

TMS: Many of our readers are familiar with the Valkyries, the network of female comic-shop employees you founded. For those who don’t know, can you give us a little background and tell us what the response to the group has been?

Leth: Well, the Valkyries are a group of women who work in comic shops all over the world. I started it about a year or so ago on Facebook, and word has just gotten all over the place! What started as a group of about 40 has grown to 170. We have members all over North America, in Australia, in the UK. It’s incredible.

Mostly, it’s a place for us to talk comics – to discuss upcoming titles, to share likes and dislikes, to vent or praise the industry. It’s been great, and publishers are starting to take note. We get some advance copies, some publicity. Image has, in particular, been really supportive. It’s nice to see.

TMS: What’s coming up for you in the future?

Leth: I’m traveling everywhere! I hit Texas next week, I’m off to Orlando and Seattle shortly after that for Megacon and ECCC… I’m all over the place! In terms of work, again, lots of projects I can’t reveal. Isn’t that both the worst and best? It’s going to be a crazy year.

TMS: Finally, tell us, if you can, what is your dream project, or a property that you would die to work on?

Leth: Other than more creator-owned, original stuff? Clone High. All I want is to write that comic. It’s #1 with a bullet. Wesley.

Keep an eye out for this wild ride into the Nightosphere starring Marceline, Jake the Dog, and a whole host of ghoulish relatives! Here’s some (non-sequential) preview pages of Adventure Time Vol. 3: Seeing Red OGN, in stores March 5, courtesy of Boom.