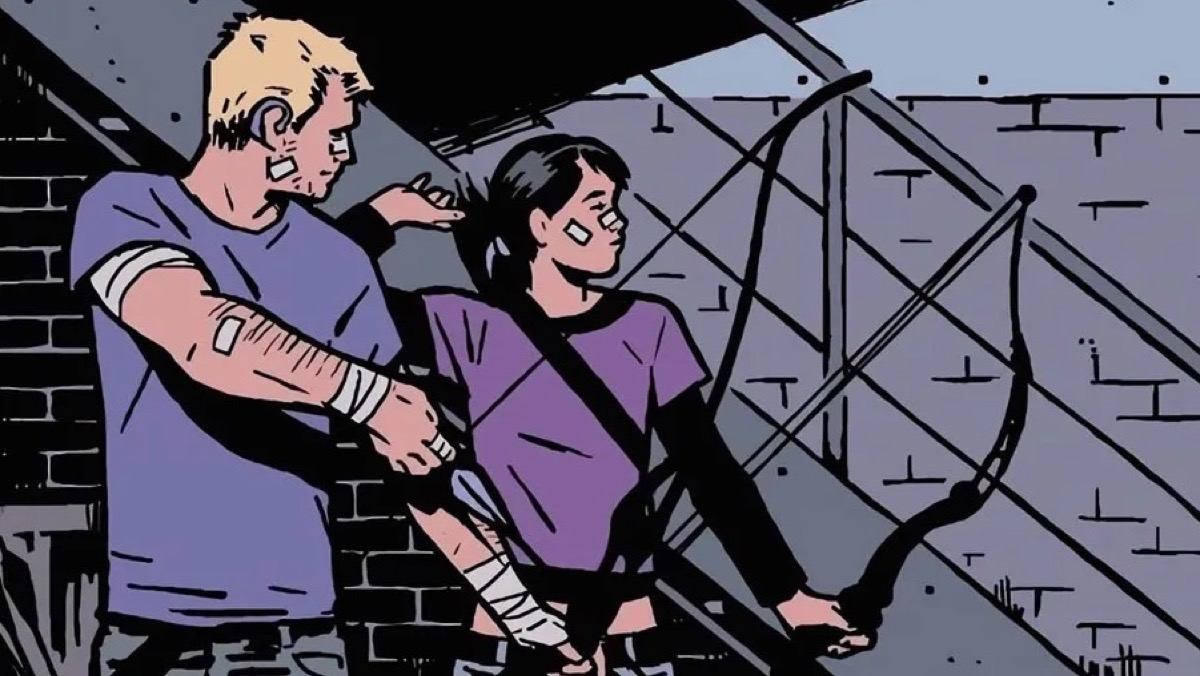 Finally, we have confirmation of who Kate Bishop is! Hailee Steinfield has been rumored for the last few months to be taking on the young archer in Disney+’s Hawkeye series, but we did’t know for sure. But the rumor just continued, and despite that there is still no official word, we now we have set pictures of Steinfield as Kate Bishop, so … I guess we were right?

Images surfaced of Jeremy Renner and Hailee Steinfield filming on location in NYC, with another familiar player making an appearance, as well. The two descend the subway steps, Kate with her bow at the ready.

Kate Bishop appeared in her iconic purple (a sweatsuit, which I respect) and was taking to the New York City subway with her bow in hand.

And, fans of Bishop’s comic persona (and the world of Clint Barton in general) will also recognize a certain furry friend next to Bishop and Clint in the set pictures.

protect lucky the pizza dog at all costs pic.twitter.com/PCuPphADld

Who also now has his own fancam.

welcome to the lucky the pizza dog appreciation club! pic.twitter.com/3eMKeqx6lE

This Lucky seems to have both his eyes, which the Arrow-turned-Lucky of Clint’s comic life doesn’t because of his dedication to Clint. (Lucky was thrown into traffic after attacking men who were after Clint, and after multiple surgeries, he survived but lost the use of his left eye. But his bond with Clint remained.)

Hawkeye is, for the most part, the upcoming Marvel show that we know the least about. We know that Kate Bishop is there and that we’re maybe going to see Yelena Belova there. Other than that, there isn’t much to go off of. But we know that Clint Barton is there and, maybe, training the next Hawkeye to take over in the Marvel Cinematic Universe.

It’s going to be a look into Clint Barton’s world that we never really got before. Within the MCU, we only saw Hawkeye as the Avenger who would leave to go live with his secret family or … go on his serial killer binge once his family was Snapped away. But other than the little glimpses we got from the character, that was … pretty much it for both himself and Natasha Romanoff.

Now though, we’re getting a look into Nat’s past with Black Widow, and I feel like we’ll get a closer look at Clint Barton and the character that does exist in the comics. Hawkeye is going to be a fun look, especially since the inclusion of Kate Bishop and Lucky does harken back to the comics more than any of his other MCU storylines.

But like … how long until I get the details on Kate Bishop’s sweatsuit? I would like to own that glorious purple look sooner rather than later.