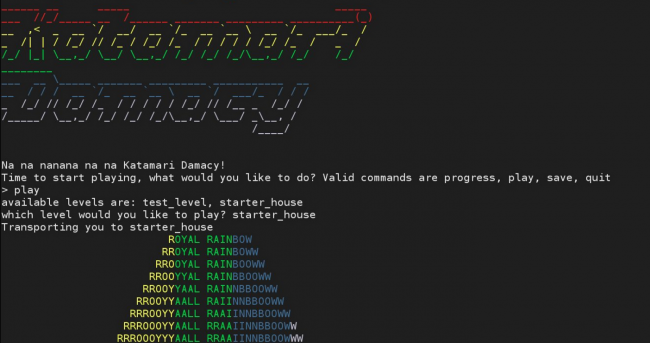 If you thought the notoriously trippy/wacky/amazing/transcendent game Katamari Damacy wouldn’t work as a text-based adventure, then buddy: you are damn-acy wrong. Noah Swartz, who works by day as a technologist for the Electronic Frontier Foundation, coded up a text-based adventure (titled Katamari Adventure) based on the sticky ball rolling space royalty game. To be honest, I’m finding myself at a loss for words (or, perhaps the opposite problem: a glut of words) to describe Katamari Damacy, so I’m having a hard time trying to fathom how one person was able to not only code and design a text-based game but also take care of all those descriptions of the little things you can roll up into your ball.

The idea, born from a post on LiveJournal, was submitted to the San Francisco “Stupid Shit That No One Needs And Terrible Ideas” hackathon, which is a hackathon that invites coders, makers, and techies alike to come together to create, well, terrible things that nobody really needs. It feels a bit like a lampoon of the current tech scene in San Francisco, where often the running gag is that everything is “like Uber but for [insert thing nobody needs here].” The amount of ridiculous things that come out of the tech industry are quick to be judged, and this hackathon takes that idea and really runs with it. That being said, I really don’t know what Katamari Adventure would be doing on that list, but there it is.

If you want to give Katamari Adventure a shot for yourself, head on over to Swartz’s GitHub to check it out. You can also check out his text-based Neko Atsume simulator, too! Text cats, joy. Oh, and spoiler: you’ll never be able to please your space dad. Them’s the breaks, kid.