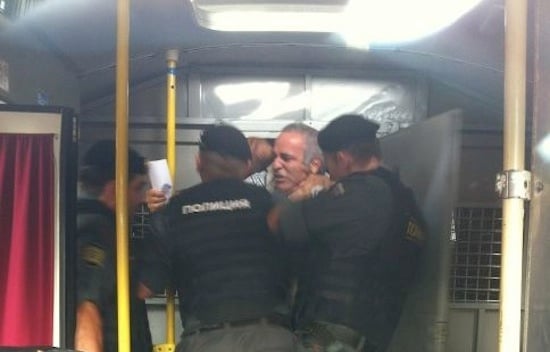 When they arrested Chess Grand Master Garry Kasparov outside of the Moscow courthouse over the Pussy Riot scandal, perhaps the Russian police didn’t realize the prevalence of photography, video recording, and social media. Given that they grabbed him as he was speaking with a reporter on camera, it would be an understatement to say that Kasparov’s arrest was widely recorded and reported. Kasparov then turned around and mined social media to defend himself in his trial.

The charges of illegal protest by Kasparov were acquitted just this past Friday after the judge, Ekaterina Veklich, made clear that the evidence presented by him clearly stood in opposition of the testimony and “facts” given by the Russian police. According to The New York Times, her response was that, “the facts recorded in the police report do not correspond to reality.”

The evidence Kasparov had gathered included these 754 images on Flickr — a frame by frame capture of the event. Combined with timestamps from the photos of his arrest, which did not correspond to the police’s version of events, the data was overwhelmingly on Kasparov’s side that something kind of sketchy had gone down. It even throws into question whether he actually bit an officer, as they also claim and use as the reason for their overwhelming force.

Though Kasparov is optimistic about his acquittal signalling change for the better, the reality is that other political dissidents don’t exactly carry the same clout. Not everyone can say, “Hi, I’m Chess Grand Master Garry Kasparov.” Well, they can, but it doesn’t make it true.

(via The New York Times, image credit via Olaf Koens)