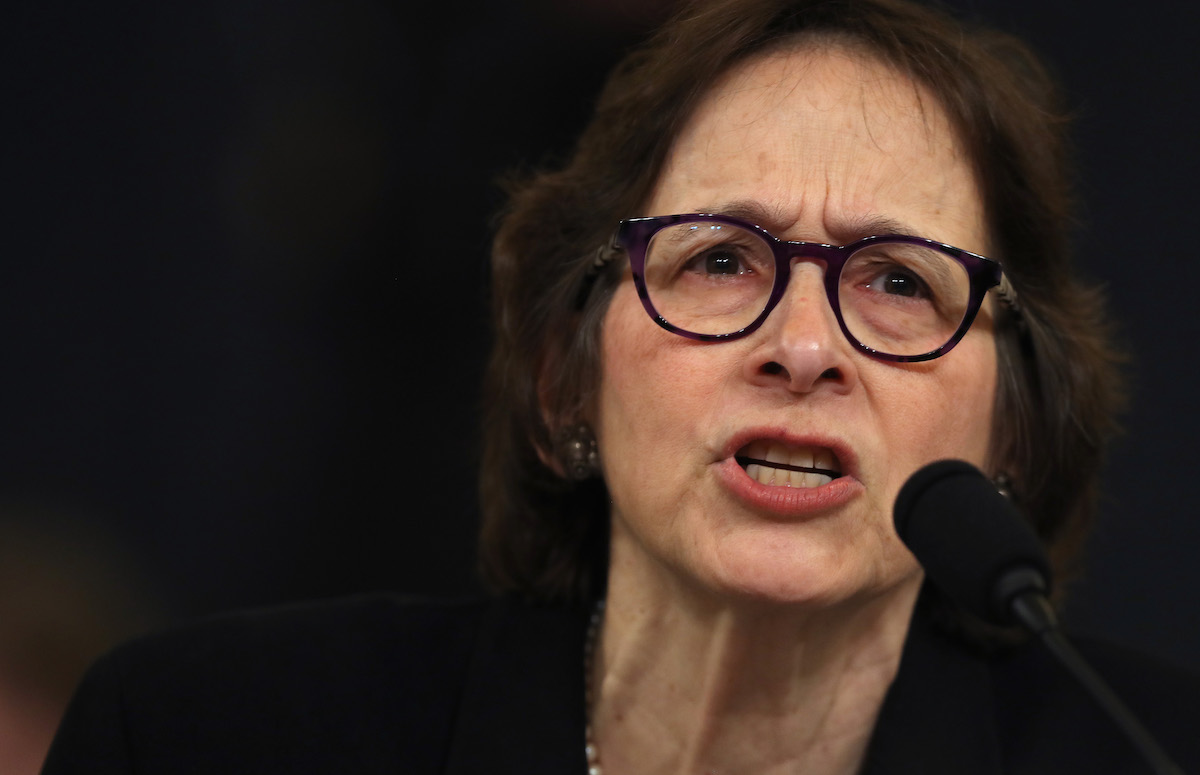 Today marked the House Judiciary Committee’s first public impeachment hearing. Unlike the Intelligence Committee, which called a number of fact witnesses to give testimony regarding specific instances of possible impeachable offenses committed by Donald Trump, the Judiciary Committee is starting off with a group of law professors, who they’ve gathered to discuss the historical and constitutional basis for impeachment.

If that sounded like it was going to be a snooze-fest, boy, were we wrong–in large part because of the participation of Professor Pamela Karlan. This impeachment inquiry has called a number of incredible women to testify: women like Fiona Hill, Marie Yovanovitch, Laura Cooper, and Jennifer Williams–and now Karlan.

As the New York Times writes, Karlan is a professor at Stanford Law School and the director of the school’s Supreme Court Litigation Clinic. She worked in the Justice Department’s civil rights division under Barack Obama. She’s worked on the California Fair Political Practices Commission, for the NAACP Legal Defense Fund, and she’s argued nine cases in front of the Supreme Court.

Karlan has written the literal textbook on Constitutional law. (A few of them, actually.) She is the paragon of expertise. And she was not messing around today.

I don’t think I would like to hand in an inadequate assignment to Prof. Karlan.

If you’re a lawyer or a law student you know that Prof. Karlan is and always has been a straight up G#ImpeachTrump

Apropos of nothing in particular…the women -Amb. Yavanovich, Fiona Hill and now, Prof. Pamela Karlan- who have testified in front of these Impeachment Hearings are amazing and no-nonsense. They make me feel like standing up in my living room, amd shouting, “Yes, girl. Yes!”

Arguably the most impressive moment in Karlan’s time in front of Congress today came early, when she fired back directly at the Republican ranking member, Doug Collins.

During his opening statement, Collins had taken a swipe at lawyers and law school (despite the fact that he himself graduated from law school), claiming that these witnesses must have been far too busy to be prepared for today’s hearing. “You couldn’t have possibly actually digested the Adam Schiff report from yesterday or the Republican response in any real way,” he said.

Pamela Karlan *is not* messing around: “Here Mr. Collins I would like to say to you, sir, that I read transcripts of every one of the witnesses who appeared in the live hearings … I’m insulted by the suggestion that as a law professor I don’t care about those facts.” pic.twitter.com/TXhmZXVWiM

She even noted that she had to buy a pre-cooked turkey for Thanksgiving because she was so determined to be fully prepared for today.

Prof Karlan said the Trump Cartel done fucked up her Thanksgiving with this corrupt bullshit.

That may have been the biggest mic drop of the day, but it wasn’t the only moment Karlan shined. She has an incredible talent for being able to explain complex Constitutional issues in easy metaphors, and she did so multiple times today.

Prof. Karlan: “Soliciting itself is the impeachable offense.”

Likens it to a police officer who asks for $20 to get out of a ticket and then decides to let the speeder go without actually taking the money.

Professor Karlan of Stanford with a solid example: say you live in Louisiana and a natural disaster strikes. Your governor goes to the POTUS to ask for disaster aid & is told that Louisiana only gets the money if he brands the president’s opponent a criminal. #ImpeachingHearings

Prof. Karlan is terrific with the real world metaphors that non lawyers can understand. “it’s like a daily double.”

That ability to explain things simply is essential here because her job, along with the other three witnesses called today (two of whom were also stellar and one of whom was Jonathan Turley), is to lay the foundation for Congress moving forward, to give Trump’s actions a Constitutional framework–no matter what Doug Collins tries to say.

Doug Collins is now going off on how all of the legal witnesses already know about the constitutional aspects involved in impeachment -because he doesn’t seem to understand that they are there to educate the panel and the American public and not themselves. Wow, this guy.

And Karlan and her colleagues definitely did that today.

Prof. Karlan so eloquently explains why the Founding Framers put impeachment, foreign emoluments & naturalization language in the Constitution. They wanted to guard against a President who betrayed our national interests for personal or foreign interests. #ImpeachmentHearing

Prof. Karlan: “Everything I read on those occasions tells me that when President Trump invited, indeed demanded, foreign involvement in our upcoming election, he struck at the very heart of what makes this a republic to which we pledge allegiance.” https://t.co/oAV50JNrPc

Professor Karlan: The Constitution is indifferent to who the next president of the United States is…all it cares about is that we have free and fair elections.