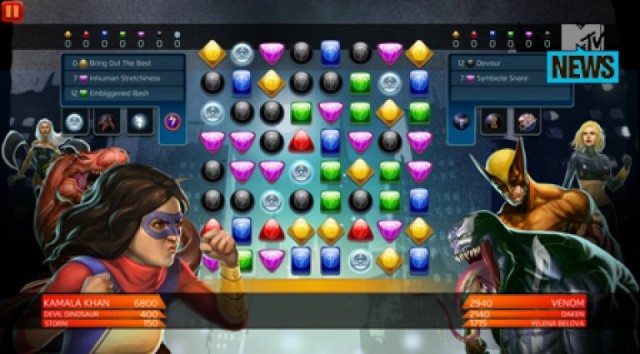 Kamala Khan, the new Ms. Marvel, has become a favorite in the comic book world since she was announced in November 2013, praised for sparking the important conversation about diversity and representation. That’s why it’s no surprise that we’re excited about Kamala’s first step into the world of games in Marvel’s free-to-play match-3 adventure game Marvel Puzzle Quest!

For those of you who don’t know Kamala, she’s a high school girl from an immigrant Muslim family. The first Muslim superhero to lead a her own comic book series, Kamala is kind and optimistic, and she enjoys writing fan fiction. People from all over the world, of all different backgrounds, love her, and it shows that Marvel is moving in a good direction.

So how will the game look with Kamala in the mix? MTV News had the exclusive reveal of her new role. Her stretching, shape changing powers will show in the game and her positive, good-hearted personality will help with energy and power-ups. This puzzle game is available on Android, iOS, and PC.

Adding Kamala into Marvel Puzzle Quest is a part of Women of Marvel Month, an event running through all of March in honor of Women’s History Month. Many female characters, not just Kamala, are being featured in games, and some amazing comic covers drawn by women are shown as well.

If you can’t get enough Kamala, she’s already teamed up with Phil Coulson in the SHIELD comics, and will also be part of the All-New All-Different Avengers – plus, Marvel is hinting that there’s even more Kamala to come.