After the premiere of the Jurassic World trailer, there were some folks arguing over the science involved (which, haven’t we had enough experience with Jurassic Park films to know not to expect much in that regard?) but others had a different agenda.

WON’T SOMEONE THINK OF THE ENDANGERED SPECIES?!?” they cried, after seeing a great white shark being offered up to a mosasaurus as a delicious pointy-teethed hors d’oeuvre. I’ll admit, when I first saw the shark all I could think was “What’s going to happen to the shark?” but my second thought was, “They make dinosaurs, I’m sure they can make sharks too.” Turns out, I was right.

Empire Magazine asked director Colin Trevorrow some questions which arose after the first trailer, one of which was the mighty shark debate.

“I thought it would be cool if we had this massive animal and the park used one of our most fearsome modern predators as food. There could be a whole other facility where they used shark DNA to mass-produce them to feed the bigger beast,” he told them, “It’s a bonkers idea, but I’m comfortable going to Crazytown, because I used to live there when I was a kid.”

So there you have it. He also dove into the newly created dino we’ll be seeing:

There is no shortage of awesome [real] dinosaurs. We could have populated this entire story with new species that haven’t been in any of these movies. But this new creation is what gave me a reason to tell another Jurassic Park story. We have the most awe-inspiring creatures to ever walk the Earth right in front of us, but for some reason that’s not enough. We’re always hungry for the next thing, and those who profit from it are always looking to feed that hunger. The focus groups want something bigger than a T-Rex. And that’s what they get.

But on to the juicy stuff – does Chris Pratt have a trained raptor motorcycle gang?

“Owen’s relationship with the raptors is complicated. They aren’t friends. These animals are nasty and dangerous and they’ll bite your head off if you make the wrong move,” Trevorrow said, “But there are men and women out there today who have forged tenuous connections with dangerous predators. That’s interesting territory to me.” 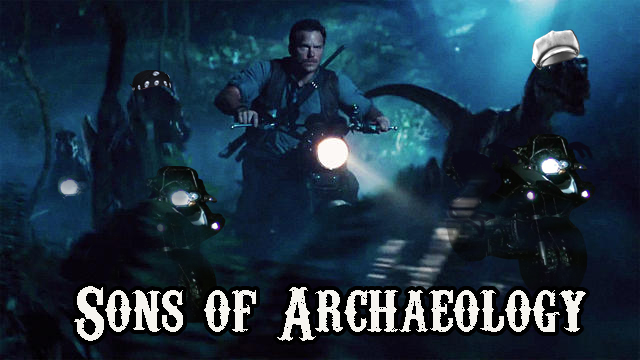 (via Spinoff Online, photoshop by Bindmanart on Tumblr)