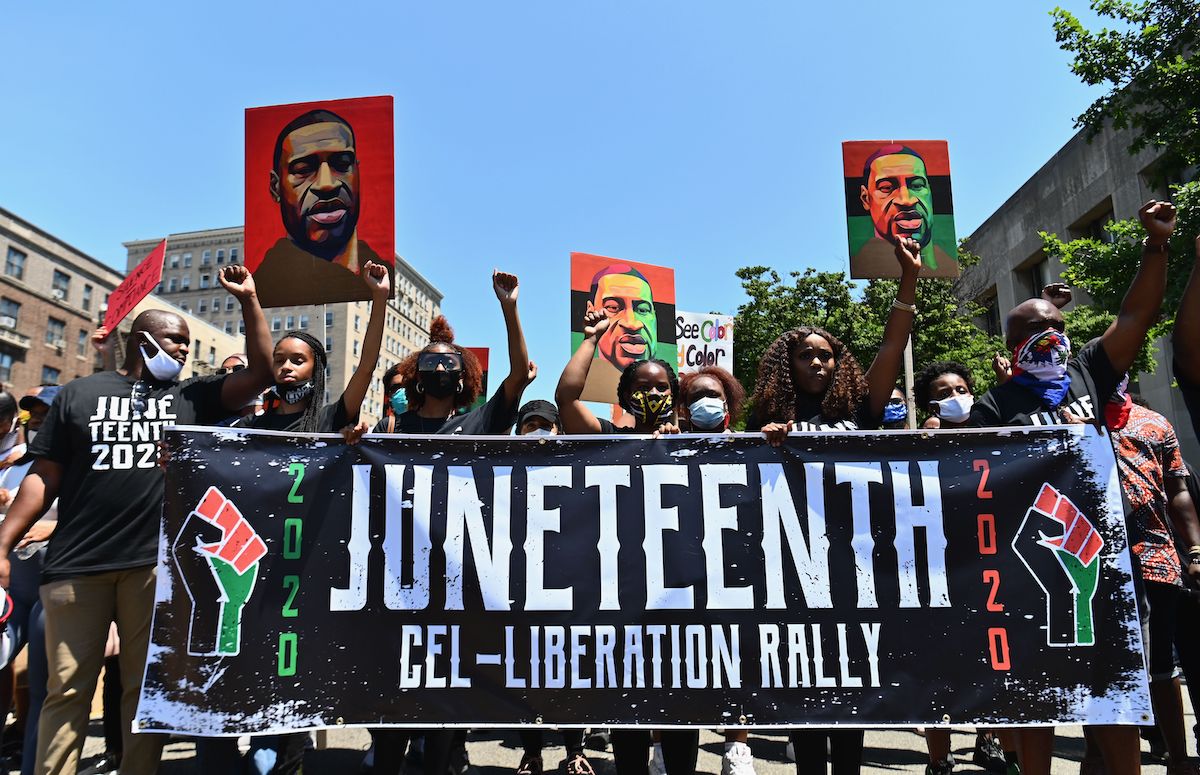 The Senate unanimously passed a bill this week establishing Juneteenth as a federal holiday. The day commemorates the end of chattel slavery in the United States. Even though Abraham Lincoln technically abolished slavery with the Emancipation Proclamation, it wasn’t until June 19, 1865, nearly three years later, that the last enslaved people in Texas were freed.

It’s a piece of our history that far too many Americans still aren’t familiar with and a federal holiday could go a long way toward making it more known. At the same time, there’s no requirement for private businesses to give employees the day off for federal holidays, so there is a question of who exactly this largely symbolic gesture benefits.

Can’t get an anti-lynching bill passed, the For the People Act to protect our voting rights or the George Floyd Justice and Policing Act.

But enjoy this day off! https://t.co/NN0VDo5l2x

Guess that is the question, were actual Black folks consulted about whether we wanted a federal Juneteenth holiday?

My concern is these efforts are too often distractions for the real work that doesn’t get done.

Juneteenth until now: a black people based celebration of freedom from slavery.

Juneteenth, in five years: “today all mattresses are 10% off!”

What makes this bill all the more perplexing is that it passed the Senate by way of unanimous consent right in the middle of the GOP’s efforts to ban schools from teaching students about the racism woven throughout the country’s history.

In recent months, conservative media outlets and Republican lawmakers have taken aim at “critical race theory,” which, by the way, is a method of legal analysis, so unless all of these elementary school kids are also prepping for the Bar exam, I don’t know why Republicans think they’re going to be subjected to it.

And they don’t know either. It’s very clear that no one attacking critical race theory actually knows what it is, but the term has become a stand-in for the subject of racism itself. States including Tennessee, Florida, and Texas have introduced bills banning public schools from teaching about issues of racism.

One of the senators who voted to make Juneteenth a holiday https://t.co/YgBtweGH2e

In Texas, a teacher “may not be compelled to discuss a particular current event or widely debated and currently controversial issue of public policy or social affairs,” and if they do discuss such an issue, they must do so “without giving deference to any one perspective.” So for example, a high school social studies teacher shouldn’t talk to their students about racial justice protests but if they do, they have to give equal weight to the “Blue Lives Matter” side of things.

It appears that white conservatives in these states are terrified that their children are going be taught that they are America’s villains. Questionable anecdotes involving children coming home crying, asking their parents if they’re racist because they’re white, have been popping up all over the place and in some places, seem to be driving actual legistlation.

“Proponents of the law haven’t cited any examples from specific schools where critical race theory or similar instruction is being taught. They have cited an anecdote involving an anonymous 7-yr-old whose mother said the child came home from school asking if she was a racist.” https://t.co/2LyTVnOvMG

The governor claims without evidence that it teaches children “to hate our country and to hate each other.” pic.twitter.com/qAIBNzKpF5

The Texas bill (now officially signed into law by Governor Greg Abbott) bars teachers from discussing a lot of different things, including the idea that an individual’s race or sex makes them “inherently racist, sexist, or oppressive, whether consciously or unconsciously.”

White conservatives are claiming that their children are facing an epidemic of teachers telling them they are inherently racist. I fully do not believe that is actually happening but what this law does do is prohibit teachers from discussing inherent, invisible biases. It also makes it incredibly difficult to discuss even the most basic fact that slavery was based in race and racism to begin with.

I can’t wait til this time next year when “Do black people exist?” is widely debated.

The Juneteenth bill was introduced in the Senate last year but was singlehandedly killed by Senator Ron Johnson, a Wisconsin Republican. Johnson announced Tuesday that he would drop his objection to the legislation. “It sounds like Congress wants to do it so I’m not going to stand in the way,” he told HuffPost.

But he was still critical of the bill, saying, “I just think it’s kind of odd that now apparently the only way to do [celebrate the end of slavery] is to give 2 million federal workers a paid day off, cost American taxpayers $600 million.”

Except making Juneteenth is not the “only way” to commemorate the end of slavery. One really big way to do so would be to teach it in schools.

This’ll be fun to teach in the anti critical race theory states :”so we’re all getting this day off because absolutely no one did anything wrong.” https://t.co/gzTTF1jBem

In addition to barring conversations about race and racism from happening in schools, these laws are also doing all they can to discourage students from having them elsewhere. That Texas law specifically prohibits schools from rewarding students in any way for engaging with social and political systems.

This includes projects for grades or even extra credit involving internships or other activities “involving social or public policy advocacy,” as well as “political activism, lobbying, or efforts to persuade members of the legislative or executive branch at the federal, state, or local level to take specific actions by direct communication.”

These laws are not just trying to crush discussions of racism, they are actively working to make young people less curious, less informed, and less engaged politically.