Donald Trump Says That No Politician in History Has Been Treated Worse. I Beg to Differ. 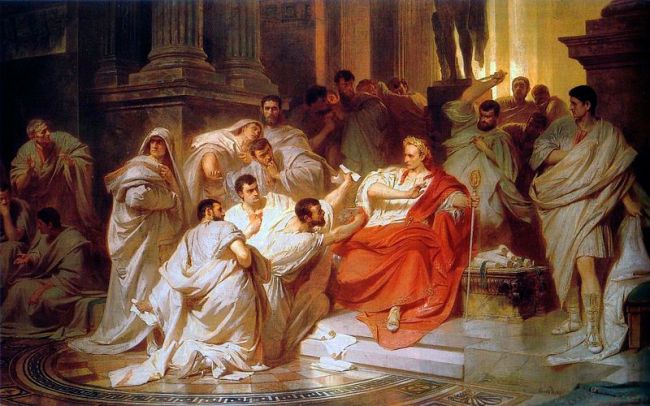 Donald Trump can maybe make that claim once Jared Kushner joins up with 60 of his frenemies to stab him to death, but not before.

Can you believe this Trump guy? Today he whined that no politician has ever been treated as unfairly or as rudely as he’s being treated—as though he had been lured into addressing the Senate at the Theatre of Pompey, then had his toga pulled down in front of the Gods and everyone by that coward, Cimber.

“Why, this is violence!” I exclaimed. Then the villain Casca had the nerve to stab me right in the neck, as if the toga thing wasn’t hard enough to deal with.

Has Donald Trump been stabbed in the neck by one of his own Senators yet? I didn’t think so. Has Donald Trump, blinded by blood, attempted to flee the crowd of his assassins—then stumbled and fallen, as they fell on him like wolves? When that happens, he can call me and only then will I commiserate.

The truth of the matter is that when you spot your most beloved ally, Brutus (who is quite possibly also your son), amongst those stabbing you to death, you get first dibs at claiming that you, a politician, have been treated unfairly. Has Donald Trump felt the bite of sharp, relentless steel wielded by his own flesh and blood? I’m not saying it’s impossible, given how things are going for him, but right now, that’s all me, okay?

Donald Trump has never had to yell out, “καὶ σύ, τέκνον,” which translates into, “You too, child?” and that charlatan Shakespeare misquoted as “Et tu, Brute?” when he was subjected to his total favorite helping out with his murder. That’s all I’m really saying here. Donald Trump can be quiet on this particular front unless he has to cross my own personal Rubicon.

Donald Trump wasn’t stabbed 23 times while just trying to go about his business as the Dictator-God of Rome. Donald Trump’s dead body didn’t lie unattended for three hours while his gang of assassins went through the streets singing, “People of Rome, we are once again free!” I really won’t ever be over that, and I don’t think history is, either.