Dogged Epstein Journalist Julie K. Brown Is Getting the Praise She Deserves | The Mary Sue

Julie K. Brown, the Journalist Who Broke the Jeffrey Epstein Cover-Up Story, Is Getting the Praise She Deserves 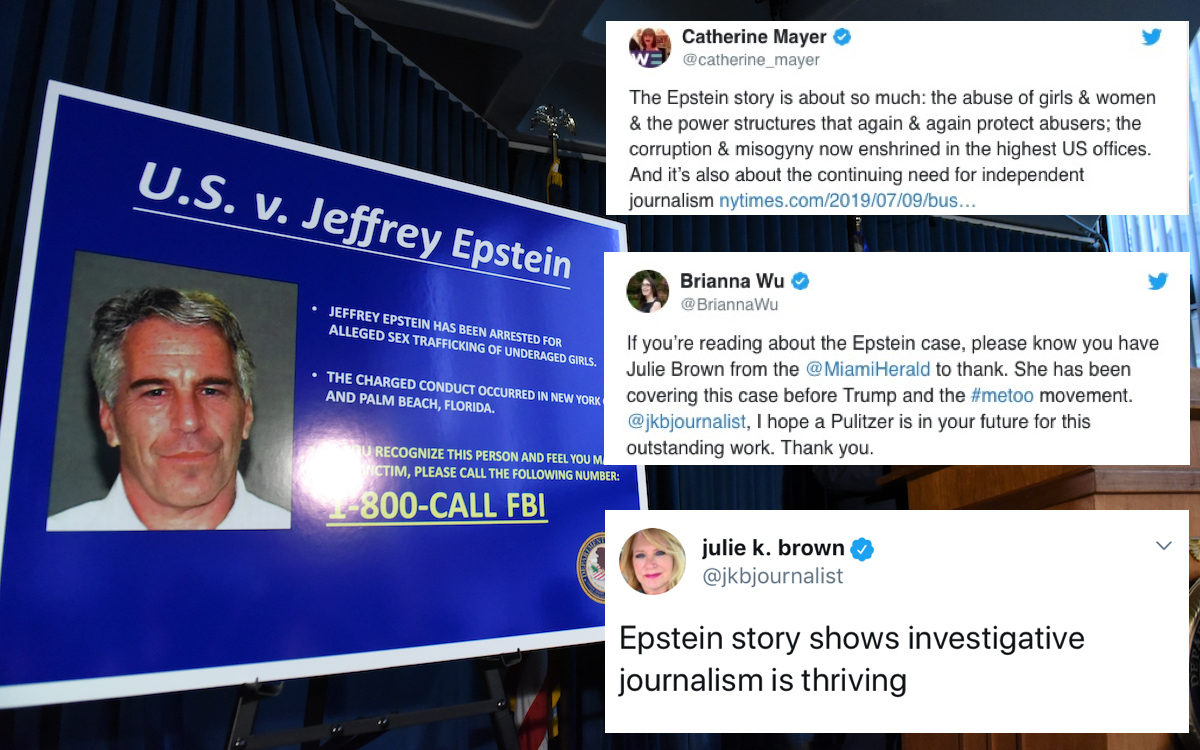 Jeffrey Epstein, the convicted child abuser and billionaire with very powerful friends, has been arrested and again charged with sexually exploiting dozens of young women and girls, some as young as 14. These seem to be at least primarily the same crimes he was convicted of in Florida in 2007 and Epstein’s lawyers are arguing that the prosecutors are trying to get a “do-over” of the last case.

It sounds like these new charges are avoiding double jeopardy laws by focusing more specifically on the crimes that took place in Epstein’s New York mansion, as well as possibly investigating Florida victims who were not included in the first case. But honestly, if it were a total do-over, it’s hard to argue that that wouldn’t be warranted (morally speaking–again, there are laws in place to prevent that).

As we now know, the plea agreement Epstein received–13 months in a private wing of a county jail, during which time he got to work full-time out of a comfortable office–was due to the illegal dealings of Alexander Acosta, then the prosecutor (not Epstein’s lawyer) in the case and now Donald Trump’s secretary of labor. And we know about those dealings thanks to journalist Julie K. Brown, who broke the story in the Miami Herald last year.

This Epstein news is such an explosive international story, it’s easy to forget that it was the result of LOCAL investigative journalism by one of Miami’s finest @jkbjournalist. Subscribe to the @MiamiHerald now at https://t.co/i93JwVYLTW

What Brown uncovered about that plea agreement is astounding. It’s not just the light jail sentence in a case that should by all accounts have come with a life sentence. The deal included immunity for any of Epstein’s “co-conspirators” in these crimes, despite the fact that those conspirators were not named in the case. That clearly seems to indicate that there were some powerful people who were concerned their names might come out later, and Acosta was issuing them protection as well as Epstein.

We know that Epstein’s circle of friends (he calls it a “collection”) is large and includes powerful people. Journalist Vicky Ward says that Vanity Fair’s editor Graydon Carter cut her reports of Epstein’s abuses from a 2003 profile because he knew Epstein was “clearly very sensitive about the women.”

Carter, by the way, tried to throw Ward under the bus but both she and other reporters have some receipts.

Graydon deleted thoroughly reported facts from some of my stories when subjects called him to complain. Believe @VickyPJWard. https://t.co/PAXpOmoH6d

Epstein’s “collection” of friends also includes men like Donald Trump, Bill Clinton, the UK’s Prince Andrew and many more. These are men that partied with Epstein in his homes and his private plane. Alex Acosta tried to protect these men or others like them–those who either took part in these crimes or helped him cover them up. But thanks to Brown’s reporting, hopefully some of that web will soon be unravelling. She did amazing work and she deserves a Pulitzer and every other possible accolade for it. For now, at least she’s getting her due credit on Twitter.

If you’re reading about the Epstein case, please know you have Julie Brown from the @MiamiHerald to thank. She has been covering this case before Trump and the #metoo movement. @jkbjournalist, I hope a Pulitzer is in your future for this outstanding work. Thank you.

There’s more than one way to grow a journalist. She’s @jkbjournalist.https://t.co/gPbk57dQNR

@jkbjournalist identified +80 Epstein victims, spoke to many of them & cops who worked on case. She discovered Acosta led team which cut illegal deal. She revealed new info, revived case. At times, she paid expenses out of own pocket.

Great profile of a remarkable reporter. My favorite part is she spent $100 sending certified letters to Epstein, his lawyers, and others, tracked his flights and showed up at his home, all to get comment — shows her determination to be fair and accurate. https://t.co/gyok83HD4W

Such an important lesson: sometimes the best time to dig into a story is when everyone else thinks it’s over. “There were all of these puzzle pieces out there, and when you put [them] together, with the passage of time, there was this really damning story” https://t.co/mW509Yl4CZ

The Epstein story is about so much: the abuse of girls & women & the power structures that again & again protect abusers; the corruption & misogyny now enshrined in the highest US offices. And it’s also about the continuing need for independent journalism https://t.co/79kaOUcewp