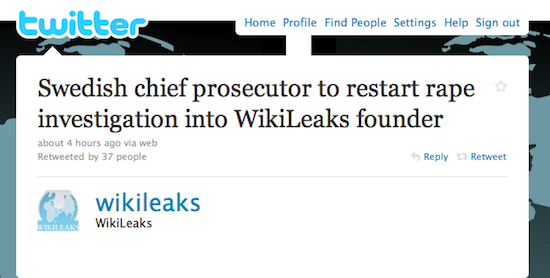 In late August, WikiLeaks founder Julian Assange was accused of rape and a warrant was issued for his arrest in Sweden, but it was quickly withdrawn; however, Swedish prosecutors have announced their intent to reopen the investigation, saying that there is “reason to assume that a crime that falls under public prosecution has been committed.”

“We have gone through the case and it is my opinion that regarding the first part there is reason to assume that a crime that falls under public prosecution has been committed,” Director of Public Prosecution Marianne Ny said in an e-mailed statement. “There is also reason to investigate further.”

The second preliminary investigation was widened to include events mentioned in the initial police report, which fall under charges of sexual coercion and molestation, the statement said.

Whereas WikiLeaks responded to the initial round of rape allegations by saying “We were warned to expect ‘dirty tricks’. Now we have the first one”, WikiLeaks and Assange have thus far been largely silent, with no press or public statement beyond the Tweet pictured above; the first time the rape allegations were raised, Assange had said they were “without basis.”