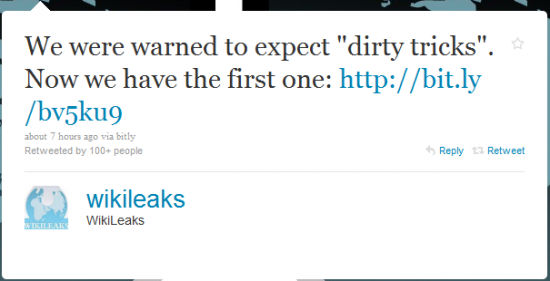 A warrant has been issued for the arrest of Wikileaks founder Julian Assange, on suspicion of rape and molestation.  Swedish authorities are calling for him to contact the police for questioning.  Assange’s first comment on the accusations (seen above) linked to the Swedish tabloid Expressen, who apparently broke the story.  Later tweets denied the accusations and with the implication that they were part of an effort to damage Wikileaks itself.

So, yes, the timing is highly convenient.  But you know what isn’t convenient?  Being raped.  If he were a politician, we would say that Mr. Assange should step carefully about these charges, and make sure that he does not treat them with an air of flippancy.

But he’s not a politician, so he doesn’t really have an obligation to, and can refer to the allegations as “dirty tricks” without fear of damaging his future job prospects.  If he’s guilty, well that’ll be awful, for his victims, supporters, and the cause of internet freedom.

And if he is truly being framed in order to hinder Wikileaks, that’s just great, but then it is Swedish authorities that are diminishing the crime of rape by false accusation, which is all kinds of screwed up.  Dirty tricks indeed.

UPDATE: The warrant, issued late on Friday, has been canceled.  From the BBC:

The Swedish Prosecution Authority website said the chief prosecutor had come to the decision that Mr Assange was not suspected of rape but did not give any further explanation.