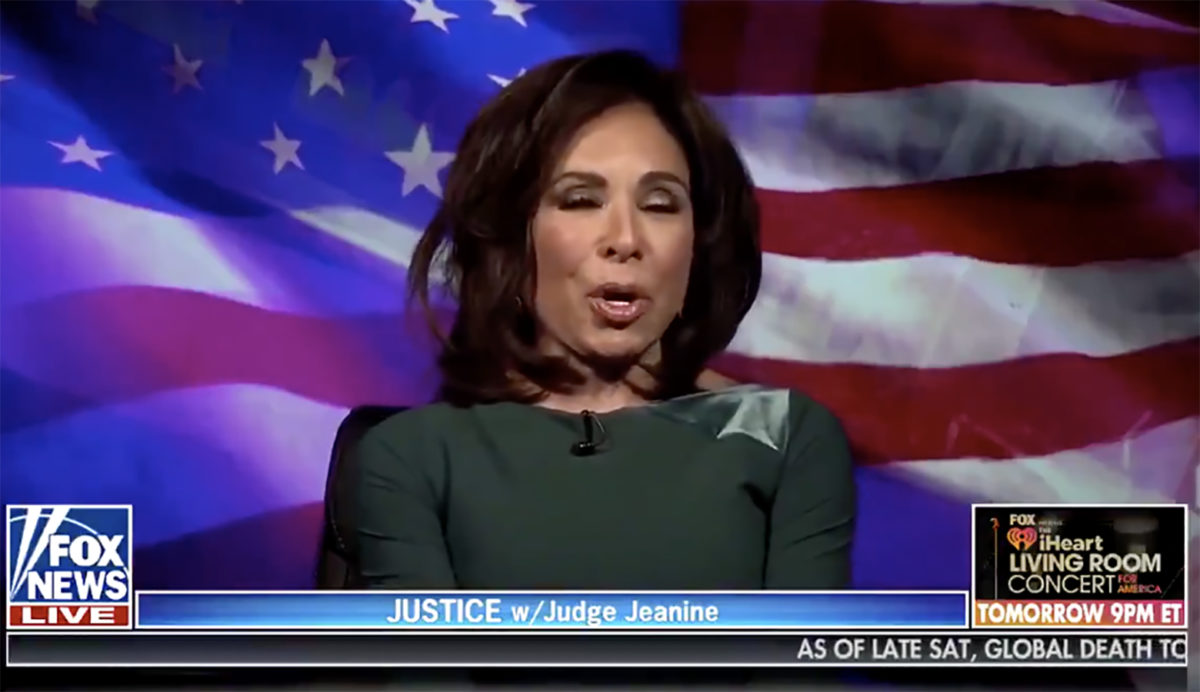 Trump sycophant and conspiracy theorist Jeanine Pirro appeared disheveled and was slurring her speech during last night’s broadcast of her show Justice with Judge Jeanine on Fox News. The anchor missed the entire first segment of her show due to what Fox News is describing as “technical difficulties”, and they’re not wrong. Technically, it is notoriously difficult to host a show when you are allegedly hammered out of your gourd.

Fox News officials released a statement saying, “Jeanine Pirro was broadcasting from her home for the first time when she encountered several technical difficulties which impacted the quality of her show, including the loss of a teleprompter. As we have previously said, we are operating with a reduced staff working remotely to ensure the health and safety of our employees in these unprecedented times.”

That’s all well and good, but it still doesn’t excuse the slurring and general discombobulation of the broadcast. Nor does it explain the overpowering scent of vodka coming through my laptop’s speakers when I replayed the clip.

Many took to social media to call out Pirro’s behavior and to speculate the following: what is she on, and where can we get some?

Will another one bite the dust? Let’s just say she’s not one to support other women https://t.co/IVavnGQsDm

On a scale of 1 to Judge-Jeanine-on-national-television, how much are we drinking this Sunday evening?

Judge Jeanine, twatted, on-air is the only fantastic side effect of #COVID19 sublime content #FoxNews ! https://t.co/qJKnyGqmav

I don’t know who made this, but you nailed it. Thoughts and prayers for @JudgeJeanine pic.twitter.com/HWGNAty7hY

At one point a heavily inebriated Judge Jeanine is slowly nodding off while her guest talks. A quick-thinking producer gets her off screen by throwing up a graphic of "mental health tips." The first tip is "AVOID NAPS"!!!! pic.twitter.com/h16JkzldrH

And hello to Judge Jeanine's new sponsor: Vitameatavegamin
"It's so tasty too!" pic.twitter.com/cuLxdGDatu

Judge Jeanine looks like she just rolled out of bed after a 3-day bender, poured some Bailey's into her coffee, and decided to do a show whilst further imbibing.

But seriously, Jeanine, get some help. I don't like you much but I'm worried about your liver. https://t.co/uJENxL02xM

Judge Jeanine gearing up for her new segment "Fuck me? No fuck you. I'm fine. Give me your hat." https://t.co/2sQcl666bO

I don’t get what all the fuss about #JudgeJeanine was about. If anything, MORE Fox “news” shows should broadcast from the Snakehole Lounge pic.twitter.com/VtqlfV73dK

This is me at The Rustic Inn in 1996 trying to order a grilled cheese from the bathroom mirror https://t.co/w0H8mTpvvk

Pirro has been a virulent defender of Trump and was suspended from the air for two weeks in 2019 after making racist and anti-Muslim comments about Rep. Ilhan Omar.

Do you know how racist you have to be for FOX News to say, “yikes, now you’ve taken it too far”?

Is mocking Judge Jeanine Pirro in poor taste? The woman clearly has a substance abuse problem. But whether that substance is rosé or the truth, who’s to say? After all, if I had to spew out the litany of lies and racist garbage that woman delivers on a weekly basis, I’d get into some technical difficulties as well.

In the meantime Judge Jeanine, take some Advil and drink some Gatorade, you’ll be just fine.