Head = Explode: Judd Apatow Teaming Up with Pee-wee Herman to Make a Movie 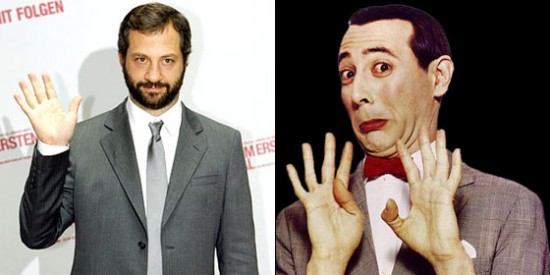 Despite the fact that it sounds totally made up, this is fantastic news that is real: Directorbro Judd Apatow is teaming up with Paul Reubens, a.k.a. Pee-wee Herman, to make “an untitled Pee-wee Herman feature,” Variety reports. While Apatow doesn’t plan on directing the film — the director’s chair is as yet unfilled — his production company Apatow Productions will be backing the movie, which is to be written by Reubens and Paul Rust, who played one of the titlular Basterds in Inglourious Basterds and starred in I Love You Beth Cooper.

While Variety‘s report doesn’t make the connection, this movie is most likely some iteration of Pee-wee’s Playhouse: The Movie, which Reubens has been shuffling around since 2006 and which is built on an even earlier concept of his, The Pee-wee Herman Story, which was to be a darker iteration of the Pee-wee saga. Reubens has been inching back into the role of late with a stage show and some Funny or Die work; an Apatow-backed movie could be just what he needs for a full-scale revival.