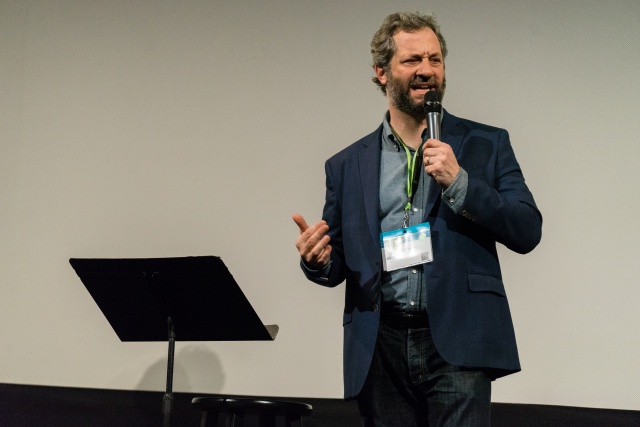 Yesterday, Diane Keaton took to Twitter to defend her “friend” and frequent collaborator, Woody Allen. This was certainly not an unexpected opinion, but the part of me that loves The First Wives Club was hoping that Keaton would just keep her messy opinion to herself and not follow Alec Baldwin into the victim shaming train.

In addition to stating that she continued to believe Allen despite Dylan Farrow’s statements, she also posted a “60 Minutes: Rewind” interview Allen did back in 1992 and asked us to “see what [we] think.”

Woody Allen is my friend and I continue to believe him. It might be of interest to take a look at the 60 Minute interview from 1992 and see what you think. https://t.co/QVQIUxImB1

The interview attached to her tweet is 15 minutes long and I have no desire to watch Allen for that length of time, but if you feel like watching it be my guest. While I didn’t have the stomach to watch it, Judd Apatow did and he was not impressed by whatever defense Keaton was attempting to put up.

He took to Twitter with his own response to the interview:

I see a man who wanted what he wanted and didn’t care that he was having an affair with a 19 year old when he was 54 who was also his daughter’s sister.He also took nude photos of this child who he had known since she was nine and left them out for his family to see. Narcissism. https://t.co/uhiTY5p7bh

While it is refreshing to see Judd Apatow speak out and he has also been very outspoken about denouncing Weinstein and Bill Cosby, he has his own friend in the public light now in the form of James Franco. As of today, Apatow has not made any public statement condoning or supporting his long-term friend, neither has anyone in their celebrity friend group.

I don’t bring this up as a way to dismiss Apatow’s right to “fire back” at Diane Keaton, but to say that he has his own albatross, as do many of the people in Hollywood. What these accusations have brought to the surface is the elitist nature of the industry has left them all interconnected. Many of them have benefited or associated with some predatory behavior because allowing men in power to make the rules is a part of the fabric of Hollywood. The studio system was invented by narcissistic businessmen who wanted to ogle beautiful women and use their power to boost their fragile egos.

There is a sense of necessary gratitude towards men who give women opportunities and I feel like that is part of Keaton’s attachment to Allen. He turned her into a brand and style icon, he solidified her career as an actress, and it was his film Anne Hall that won her an Oscar. I am even sure she does seem Allen as a friend, but the reality is that your friends can also be predators. Your friends can also be monsters.

Sarah Silverman’s Louis C.K. monologue still sits at the top as one of my favorites because it acknowledges that yes, she cares about her friend, but it doesn’t mean he did not do these horrible things or that his good qualities outweigh the damage done to those women.

Judd Apatow’s silence on Franco is almost as problematic as Diane Keaton’s statement. It may be true that he is entitled to his own personal opinions, but if he is going to be outspoken about everyone else’s sexual misconduct, then he cannot be silent about accusations surrounding his own friend. Franco may not have done what Allen has been accused of, but that doesn’t mean Apatow and others who were quick to condemn others can now be allowed to exist in silence.

I am a huge fan of Judd Apatow’s work and I’m hoping that when he does speak he will have a strong statement. While I don’t fully expect him to through Franco under the bus (sadly), I hope he has taken this time to craft a nuanced and thoughtful statement. If men in Hollywood want to be allies, they have to be allies all the time.