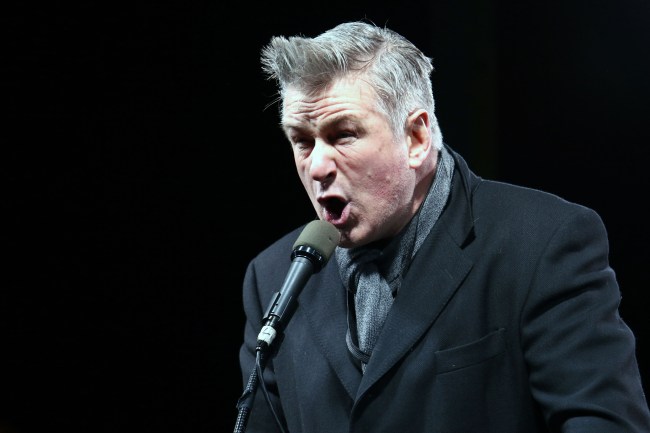 New Rule: If you don’t understand anything about the experiences of sexual violence, racism, or child abuse, kindly keep your thoughts to yourself. A person who could seriously use this rule is Alec Baldwin who decided to double down on his pity party for Woody Allen yesterday.

As reported by The Hollywood Reporter, Baldwin released a series of tweets comparing the accusations of Dylan Farrow against her father, Woody Allen, to be similar to the false rape accusation that takes place in Harper Lee‘s To Kill a Mockingbird.

“[One] of the most effective things Dylan Farrow has in her arsenal is the ‘persistence of emotion,'” Baldwin tweeted. “Like Mayella in [“To Kill a Mockingbird”], her tears/exhortations [are] meant [to] shame u [into] belief in her story. But I need more than that before I destroy [someone], regardless of their fame. I need a lot more.”

Baldwin followed that tweeted shortly after with: “To say that @RealDylanFarrow is telling the truth is to say that (brother) @MosesFarrow is lying. Which of Mia’s kids got the honesty gene and which did not?” He also shared a Sunday New York Times piece that discussed whether Allen would work in the business again.

Baldwin concluded with “If my defense of Woody Allen offends you, it’s real simple. Unfollow. Condemn. Move on.”

Now my rage about this is twofold. Firstly, trying to act as though Dylan Farrow is shedding crocodile tears when her story has been consistent over the years says more about Baldwin than it does about Farrow. I’m sorry that her story seems so unbelievable to you when Allen is married to his own former step-daughter. I’m sorry that seeing Dylan Farrow cry and show genuine emotion in her first major interview about this traumatic event that she says took place seems to you like a “persistence of emotion.” But how sad for you that you are so willing to dismiss a woman’s pain because it is inconvenient for you to give up some sorry idolization for Woody Allen.

In another tweet, Baldwin said: “Is it possible to support survivors of pedophilia and sexual assault/abuse and also believe that WA is innocent? I think so. The intention is not to dismiss or ignore such complaints. But accusing ppl of such crimes should be treated carefully. On behalf of the victims, as well.”

Really? What more exactly do you need to believe Farrow? Furthermore both Moses and Dylan can be correct. Both of them could have suffered about from different parents and had different experiences with their parent of choice. That is not uncommon, and if you did even an iota of research about sexual abuse that takes place within families you’d know that. Breaking it all down to an “honesty gene” and making it about “Mia’s kids” ignores that Allen was their parent too. Just because you want to work with Woody Allen again, doesn’t mean you have to call Dylan Farrow a liar.

How can you stand with survivors while ignoring the fact that most survivors of this type of molestation were molested by someone within their own family, while dismissing that Woody Allen, by being Farrow’s father, would have that type of access to her?

Secondly, and I’ll admit that part that makes my blood boil even hotter, is the comparison between a black man who gets sentenced to jail due to racism and the false testimony of a white woman to what is happening to Woody Allen.

While To Kill a Mockingbird is a work of fiction, the reality of the hundreds of black men who were lynched and towns destroyed due to the false accusations of white women is not something to be used to prop up a man accused of sexually assaulting his own daughter! We may never know the exact number of black men killed due to lynching, but looking at cases like the Scottsboro Boys, where nine teenage black boys between 13 and 19 were accused of raping two white women on a train. Or the case of George Stinney, a fourteen-year-old boy who was sentenced to death in South Carolina for raping and murdering two girls, and was so small for his age, they had problems strapping him to the electric chair when he was put to death. It was was only last year that the woman who falsely accused Emmett Till of harassing her, an accusation that led to his death, admitted she lied about it.

To pretend that Woody Allen is getting even a fraction of the complete and utter destruction that was brought against other men of color, or minorities, is outrageous and insulting. Baldwin may have been referencing a piece of fiction, but it was based on real injustices that took place in this country.

If Woody Allen is guilty of what he has done, and I personally do believe he is and stand with Dylan Farrow, he has escaped justice in almost every way possible. People like Baldwin who use their platform to defend these men for the sake of justifying their own decisions are transparent.

Maybe playing Trump so much has finally gotten into his brain. Time to give the wig a breather.