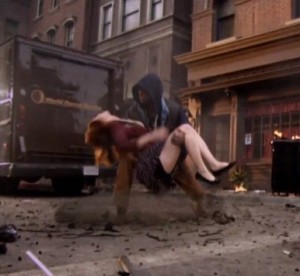 I’m not going to say who he’s playing, but he’s certainly cranky as you can tell from the trailer… It’s great, he came in to guest star and he tears it up. He’s got that kind of energy, he’s so much fun, and such a lovely guy. — Joss Whedon, when asked who J. August Richards will be playing in Marvel’s Agents of SHIELD.

The identity of the hooded man exhibiting super strength and possibly invulnerability in the teasers for Agents of SHIELD has been an item of hot speculation lately. After Luke Cage was ruled out by folks in the know, speculation has focused on the lesser known character Rage: at thirteen year old Brooklyn native endowed with strength, invulnerability, and the appearance of an adult by that old stand-by of nineties superhero origins: toxic waste.

Whedon answers questions of Richards’ character as only a master of fan expectation would.